By Maureen Sundberg on June 15, 2015 in Urban Landscaping 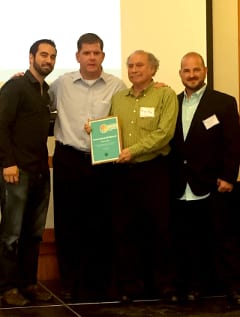 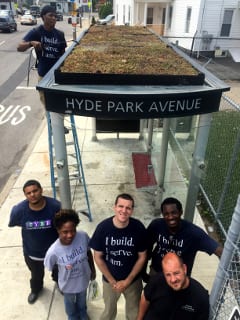 A YouthBuild Boston trainee waters in a green roof installed on one of Boston’s bus shelters after installation by a team of volunteers from YouthBuild and the Hyde Park Green Team led by Trevor Smith, foreground.

During Summer 2014, Fairmount/Indigo Line CDC and Trevor equipped four Boston shelters with green roofs. This spring they installed four new green roofs, two in Hyde Park and two more near the Uphams Corner Station of the Fairmount Commuter Rail Line. Youth from YouthBuild Boston and the Hyde Park Green Team planted the roofs with sedum and native plant species under Smith’s direction and have been trained to maintain the roofs. Since receiving the Greenovate Award, the group installed one more green roof in East Boston. 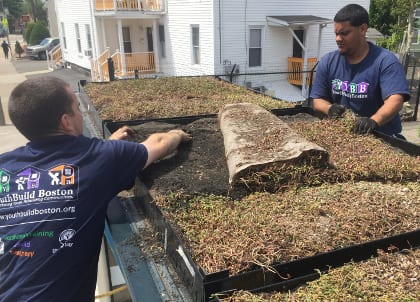 YouthBuild Boston trainees install sedum mats on the roof of a bus shelter in Hyde Park.