June 12, 2011 marked the first ever annual California Native Garden Tour, a self-guided tour of sustainable private and public gardens in Santa Cruz County. Nine months ago, a dialog began between several non-profit and for-profit groups. The group identified a need and initiated the quest to change the way we view gardening. With a clear goal in mind, the Ecological Landscape Alliance, California Native Garden Foundation, Master Gardeners of Monterey, UCSC Arboretum, and the Santa Cruz native nurseries Central Coast Wilds and Native Revival stepped up to the plate to organize this grassroots garden tour. 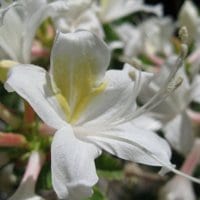 Twelve gardens were featured this year, ranging from expansive acreage in Scotts Valley to public spaces like the Shadowbrook Water-wise Demonstration Garden in Capitola. At center stage in each garden is a vibrant collection of plants native to California. These natives have benefits beyond their beauty. As natural habitat becomes increasingly fragmented, native plants offer refuge to birds, bees, and butterflies. As water is always in short supply, native gardening requires much less of it, sometimes none at all. Bio-swales of native grasses filter poisons from surface runoff and prevent them from entering our watertable. In difficult economic times, the low maintenance and water saving aspects of native gardens help keep a few extra dollars in home and business owners’ pocket.

The California Native Garden Tour was different from other garden tours in this county not only for its focus on natives. In an effort to make the tour available to everyone, it was completely free. Participants registered online and were sent a digital brochure prior to the event, saving paper and delivery costs.

This first tour was hugely successful, with more than 500 people registered, 13 talks offered, and five plant sales at select gardens. Everyone involved, including the homeowners volunteers, and participants, left each garden inspired to create a bit of paradise in their own backyards. 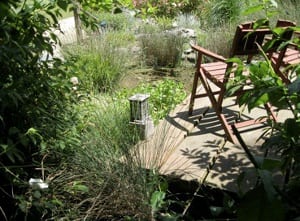 Michael Eurs’ garden in Soquel received much of the traffic. Eurs has been gardening his land for about ten years. His garden includes a Xeric native area, a pond, vegetable garden, and chickens. However, most impressive is the work Eurs has put into restoring the creek that runs through his property. When he moved into his home, the creek was completely overgrown with invasive species like Cape Ivy. He has since removed it and planted the appropriate native species to take its place and prevent against further encroachment.

Trillium, an often hard to find native, puts on a show in Scott Bentall's and Robin Cummins' garden.

There was a steady stream of visitors through Robin Cummins’ and Scott Bental’s garden all day. Bentall is an experienced grower of carnivorous plants, including natives such as Darlingtonia californica, California Pitcher plant. This garden also features a resident tortoise, succulent garden, and completely native front yard. Eclectic as it is, this is truly a garden for the collector.

Terra Gnoma Community demonstration garden, known for is emphasis on permaculture practices, offered a series of talks throughout the day. Topics ranged from “Edible and Medicinal Natives” to “Tool Safety and Basics”. Located one block from the beach, many people arrived on bicycle or foot to view the garden and educate themselves. In future years, mini touring will be encouraged: Garden clusters and bike routes will be drawn up on the tour map. 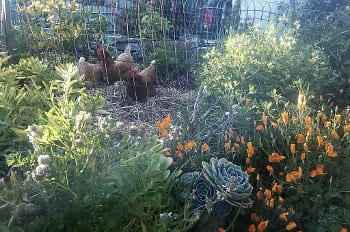 With the huge turnout and an excited buzz that could be heard around the county on Sunday, this is surely only the beginning of something big. Local gardeners are already lining up to put their native garden on next year’s tour. Garden visitors were truly thankful to have an opportunity to spend the day entranced by California’s beauty and diversity. Stay tuned for next year’s event, as it is sure to grow in size and scope.

Lindsay Goldberg graduated from the University of California, Santa Cruz with a BA in Environmental Studies in 2007. For the following three and a half years she managed a California native plant nursery where she became passionate about advocating for the use of native plants in the garden. Her favorite local native plant is Epipactus gigantea, Giant stream orchid. She may be reached at LindsayLGoldberg@gmail.com.

Book Review: The Woods in Your Backyard
Review: A Community Guide to Growing Greener