The winter of 2015 will be one for the record books. It was cold, snowy, and after weeks of shoveling snow off our roofs it was hard for any of us to imagine a landscape that wasn’t frozen in five kinds of ice. Even during the shortest days, however, lights were bright and hot tea brewing at North Parish Church in North Andover where an enthusiastic group was abuzz with plans to welcome creatures great and small to a Pollinator Habitat and Monarch Butterfly Waystation. 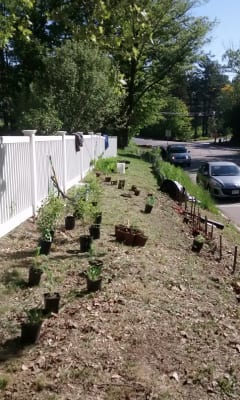 A narrow strip of land between fence and road was a maintenance challenge that became a habitat opportunity.

The North Parish Church was founded in 1645 by Puritan settlers with a profound reliance on the land and deep awareness of this relationship for survival. Over its 370-year history the theological foundation of the church has evolved, and it is now part of the Unitarian Universalist Association (UUA). A respect for ecosystem diversity and the responsible care of the living earth has also evolved since those early frontier days as demonstrated by the church’s Green Sanctuary Program, which  unites congregations across the globe to address climate change and environmental justice.

Over the last decade, members of the North Parish congregation not only tackled major renovations to their historic 1836 church building, but at the same time took care to transform their outdoor space into a National Wildlife Federation Certified Wildlife Habitat. Ongoing exterior design includes both native and non-native plant species with sensory and seasonal interest, xeriscaping, and connecting pathways providing opportunities to interact with the landscape. All are welcome to walk the labyrinth, sit in the meditation garden, and stretch-out in the multi-use backyard in surroundings designed with an eye to achieving sustainability. Additionally, the church’s educational curriculum actively encourages children to engage with the outdoors.

Recent public awareness about the loss of pollinator populations, including the much publicized and very visible decline of the monarch butterfly, is inspiring public action. When the church began to think about what to do with a hard to maintain roadside slope fronting church property, a pollinator friendly habitat was the natural choice. 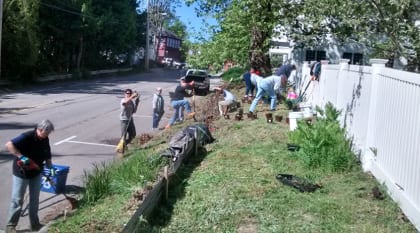 In late May 2015, the crew arrived to plant bare root material (potted days before) and plugs. Following the planting, the area was overseeded with grass mixes: ryegrass/hard fescue mix on areas of bare soil on the lower slope for stabilization and hard fescue on the upper slope where plants would go.

Defining the Place and Developing a Team 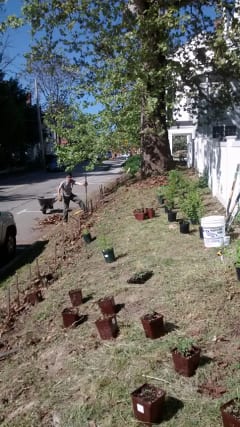 Plants are laid out ready to go in the ground. North Andover Wildlife Team provided many of the plants for the initial installation; more plants will be added in future years.

The North Parish Church site occupies a prominent position in the Old Town Center Historic District of North Andover, MA. Like most centuries-old parcels, its boundaries tell the story of shifting land uses, expanded roadways, and utility easements. A significant portion of the site is also crossed by a wetland buffer zone. Abutting church property is a strip of land that slopes from the church fence down to a curbed two-lane road with parallel parking spaces. Although town land, this slope is actively maintained by volunteers at North Parish and visually interpreted by the community as part of church property.

In the spring of 2015, landscape architect and North Parish member Willow Cheeley proposed a pollinator habitat design, approximately 80’ by 12’, that would capitalize on: the institutional legacy of environmental ethics at North Parish; the enthusiastic support and volunteer base of the congregation led by House and Grounds Co-Chair Debb Putnam; the need to keep maintenance time and costs low; the desire to work with and maintain a good relationship with the Town of North Andover; the visual impact of the slope on the neighborhood; and the opportunity to collaborate with the North Andover Wildlife Team and its Team Leader James McCarthy. 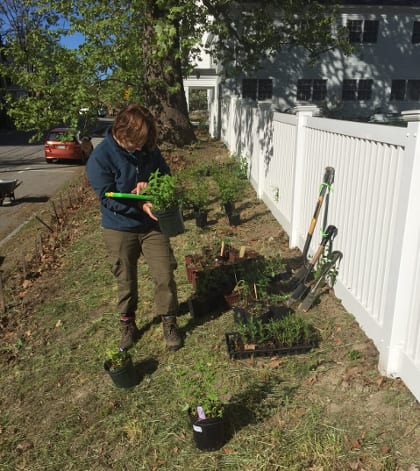 Willow consults her planting plan while laying out plants before planting begins. She made a few in-the-field adjustment to accommodate sun exposure and some changes in plant materials.

Inspired by this local commitment to conserving ecosystems and by author Douglas Tallamy’s book, Bringing Nature Home, James McCarthy set out to bring the message of protecting and increasing the biodiversity “in your own backyard” to the community of North Andover. He established the North Andover Wildlife Team (NAWT) in October 2012 with the mission of planting as many native plants in town as possible. To reach this goal the Team began the process of certifying the town with the National Wildlife Federation as a Community Habitat. This program provides a framework for the NAWT to establish quantifiable milestones, for example adding native plants to five local schools, while building awareness in the community of the importance of native plant species. In 2013 and 2014 the NAWT donated plants and helped establish gardens at all five North Andover public elementary schools, two private pre-schools, a public playground, and an historic home while also providing over 100 free native plants to town citizens. 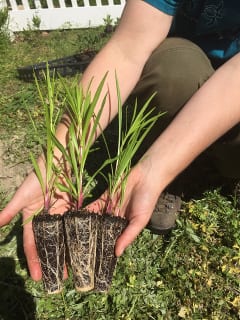 Plant plugs were a cost-effective option for the garden. The long roots of these Liatris spicata will help with establishment.

NAWT donated a significant portion of the installed plants as well as expertise, volunteers, and time to the North Parish Pollinator Habitat and Monarch Waystation. This is the largest project that the NAWT has worked on so far in the town; they were proud to assist with the effort. Plants were sourced from NAWT’s native plant supplier, New England Wetland Plants in Amherst, MA. For a complete list of species used in the project, see Resources at the end of this article.

Ecological Design runs the gamut of interpretations, scale, and budget. For many organizations and individuals wholesale clearing of undesirable species, densely spaced plantings, and intensive maintenance for establishment are not viable options. Many homeowners may feel intimidated by the amount of information available and by the uncertainty of the result, especially when traditional landscaping methodologies have created very narrow expectations for what a landscape is “supposed” to look like. Many of us want to do something to address the rapid ecological changes around us, but we don’t know how to get started. Having an example in the neighborhood can inspire confidence. 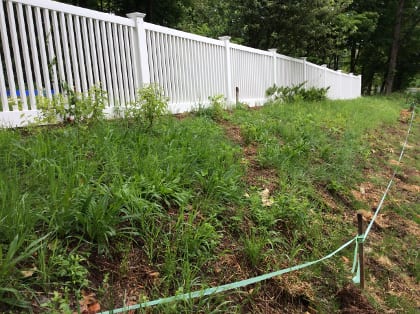 Pollinator plants were interplanted among existing roadside vegetation. As the garden matures and more plants are added, undesirables like horsetail and poison ivy will be weeded out while clover, dandelion, purslane, and Queen Anne’s lace remain. One goal of the evolving garden is to provide the community with an example of an ecological alternative.

The design concept proposed for North Parish was predicated upon a hands-on, in-the-field approach taking advantage of available resources. It recognized that a “finished” landscape was not possible in the short-term or even desirable. The opportunity to capture the imagination of the community, engage volunteers, and inspire a long-term interest in an evolving habitat was and continues to be as significant a part of this project as the plant species selected. 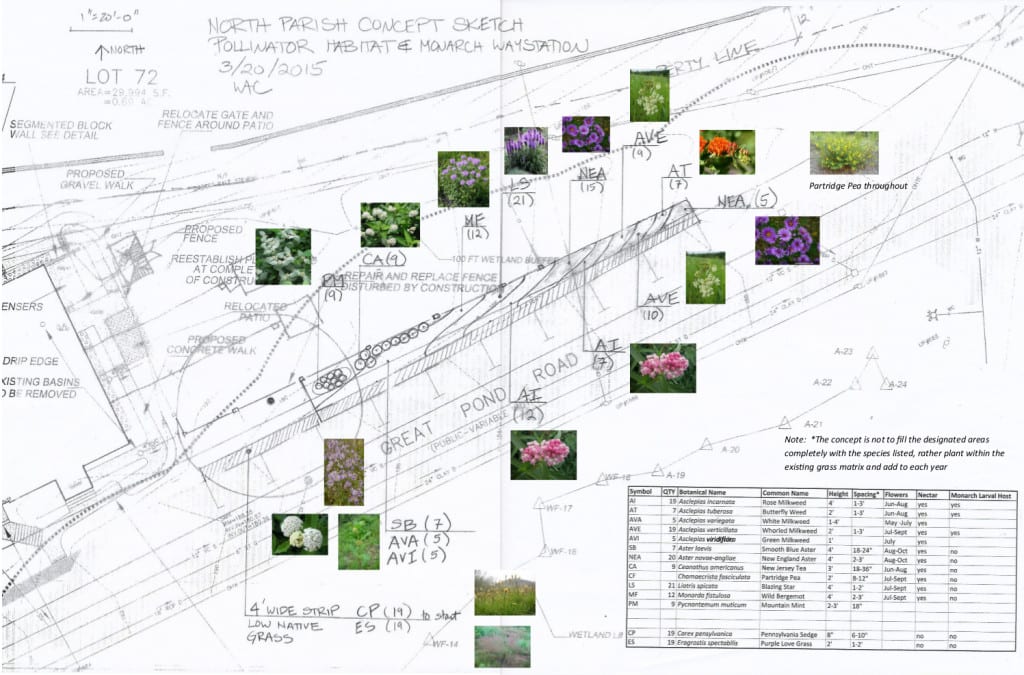 A quick concept plan helped helped convey the general idea of the garden and helped the team set expectations and determine a budget.

The design consists of 11 species that produce nectar or larval food for pollinators and two species of native low grass that will eventually provide an alternative to mown grass at the base of the slope where car doors need to open. During the space of two hours on a Saturday about a dozen wonderful volunteers, including children, installed plugs and bare root plants that had been potted-up earlier in the spring. Species were installed in diagonal lines within the existing grass and non-native “weed” matrix on the slope for visual effect and to create the same-species blocks attractive to pollinators. After volunteers planted the slope, Willow and James presented a talk about native pollinators and the critical significance of native plants to habitat.

Two types of grass seed were purchased in bulk from the local hardware store to stabilize the slope after the removal of erosion control fence leftover from building construction. The grass seed was selected based on its drought tolerance, fast germination, and ability to mesh well with the native perennials. Additional hard-to-find native perennials were planted as seeds about a week after the volunteer day. The slope is being watered about twice weekly during the summer with the expectation that supplemental watering will not be necessary once the plants are established. 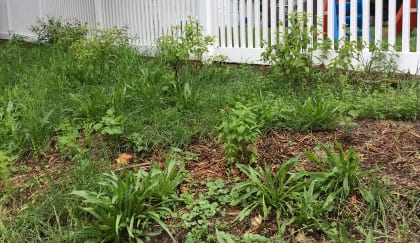 After three weeks and a little rain, the New Jersey tea (Ceanothus americanus) are starting to bud behind the mountain mint (Pycnanthemum muticum).

Each year weekly volunteers will participate in the process of hand-removing invasive and non-native species and, as budget allows, additional plants and native species will be added to the existing pattern. Each year the native species will spread and put on a more eye-catching display. The goal is to create an aesthetically pleasing, functional habitat during and after the establishment period. In three to five years, given available resources, the slope will consist of the highest percentage possible of native species. The slope will be mowed once per year in the fall.

One of the most significant things this project offers is the opportunity for community investment in a sense of place. Volunteers and neighbors will be able to watch the slope change over time and members of the congregation will be able to incorporate the slope into educational programs while enjoying color and dynamic change in the landscape. Our reliance on the landscape for survival is not as visible on a daily basis as it was for the early Puritan settlers, but ecosystem diversity is no less critical. 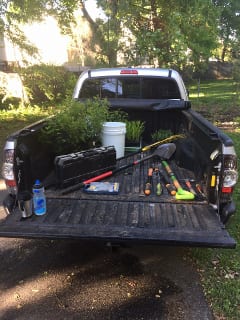 Loaded up and ready to go on planting day.

This project would not have been possible without the support of The North Parish Church and its willingness to try something new and different, or without the contributions of the NAWT and enthusiasm of volunteers. Special thanks go to the town of North Andover and Conservation Commissioner Jennifer Hughes, as well as to Russ Hopping, Ecology Program Director for The Trustees of Reservations. The winter of 2015 brought a perfect storm of cold and snow, but also of true community participation in a project we can’t wait to watch evolve over time. 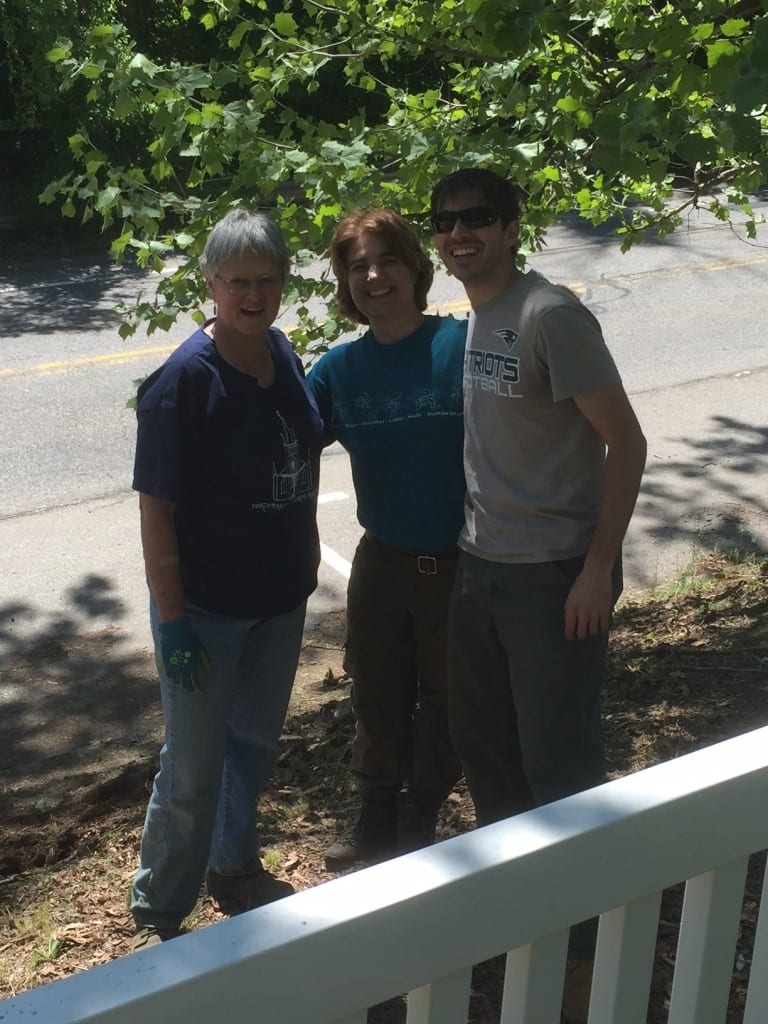 Debb, Willow, and James take a break on planting day.

Willow Cheeley, RLA, Willow is a Registered Landscape Architect with a lifelong interest in ecological design.  Her background includes a degree in Natural Resources, the design of municipal parks and playgrounds, working with volunteers, and developing creative ways to engage and educate the public.

Debb Putnam, Co-chair North Parish House & Grounds, began the gardens at North Parish with Dick Wilson, her “partner in dirt,” and a handful of volunteers in 2008 after an extensive building project. Gardening is both a lifelong passion and a spiritual practice; work with Mother Nature provides many lessons!