By ecopro on June 14, 2013 in Edible Landscaping, Permaculture

Reprinted with the author’s permission from the Spring 2013 Wellesley College Botanic Gardens News.

During the summer of 2012, one of the projects undertaken by the Environmental Horticulture and Sustainable Agriculture interns at Wellesley College was the planning and implementation of a permaculture garden at Ashland Middle School located about ten miles west of Wellesley College.

The project was born from a partnership between the Ashland Middle School, the Wellesley College Office of Religious and Spiritual Life, and Kristina Jones’ spring semester horticulture class. In the fall of 2011, the Office of Religious and Spiritual Life undertook President Obama’s Interfaith and Community Service Campus Challenge, an initiative meant to bring people of different faiths together in community service. In their partnership with Ashland Middle School, one goal was to install a permaculture garden in the middle of a large traffic circle (roughly 37’ in diameter) where only patchy grass was growing. Kristina’s horticulture class contributed their expertise in permaculture gardening. 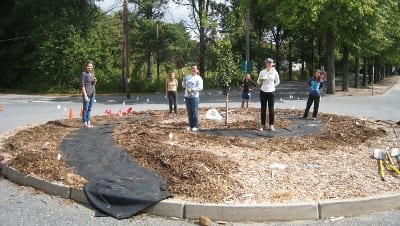 An Asian pear tree is at the center of the permaculture garden planted at Ashland Middle School.

An Asian pear tree was selected the middle of the circle, and the students’ task was to design a community of companion plants to support the wellbeing of the tree. Students also created an explanatory sign and short video.

With the semester over, Kristina chose four designs and assigned the summer interns the task of combining them. Three of the interns, Echo Yue, Mackenzie Klema, and me, had taken Kristina’s class. It was great to continue to work on the project during the summer.

Why a permaculture garden? Low maintenance, a facet of permaculture design, was especially important for the traffic circle. Also, the philosophy of permaculture aligned well with the mission of the Interfaith and Community Service Campus Challenge. Permaculture relies on a diversity of plant types and favors intentional cooperation over competition. While biologically sound principles, these values are useful for middle school students as well. The name “Diversitree” was chosen for the site, embodying both biological properties and philosophical ones. 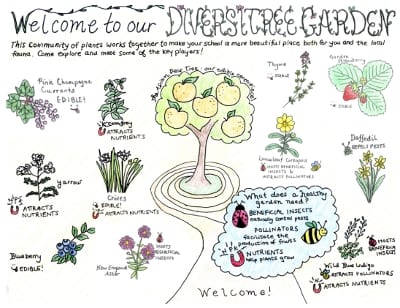 The sign for the garden by Mia Howard, Wellesley ’12, says it all.

We wanted the circle to be a welcoming space which people, particularly students, could fully explore and interact with. For this reason, we chose a spiral path leading from the outside of the circle in towards the tree. Our plant selections demonstrated that food can be grown anywhere with a minimal input of labor when grown in a polyculture.

Plants were chosen to provide a diversity of functions to the local ecosystem. Plants with attractive and fragrant blooms (purple coneflower, New England aster) will bring beneficial insects and pollinators (ladybugs, bees, butterflies, etc) to our garden. There are plants that naturally repel pests (daffodil, yarrow). Many of the plants are considered “dynamic accumulators” (comfrey, yarrow), which draw necessary nutrients from the ground up into the top layer of soil for all the plants to use. Plants that are nitrogen fixers (lupine, indigo, clover) ensure that the soil will not be depleted of this important nutrient.

The combination of plants was thoughtfully considered so that is might also encompass a diversity of heights, bloom times, and different root lengths and styles, and propagation methods. We hope this strategy will minimize competition between plants and ensure that no one plant comes to dominate the circle over time.

In June of 2012, the traffic circle was sheet mulched with a layer of newspaper and wood chips. The Asian pear tree had already been planted and was on a regular watering schedule. By the end of the fall, with the help of some former interns; Vaishali Gupta from the Office of Religious and Spiritual Life; Lisa Beaudin, the Ashland Middle School nutritionist; and a few middle schoolers, almost all of the plants were in the ground.

I’m looking forward to seeing how this garden turns out come spring 2013. What I like about gardening is that it’s a constant process. I can’t wait to see what survived the winter, what works well together like we planned, and what just totally disregards our carefully laid plans. Finally, I am looking forward to seeing how the students and parents of Ashland Middle School interact with and learn from their new Diversitree Garden.

Rebecca Leung, Wellesley College class of 2013, graduated with a degree in Economics. She served as the Dorothy Thorndike Intern at Wellesley College Botanic Gardens and may be reached at rleung@wellesley.edu.