By ecopro on June 14, 2013 in Edible Landscaping, Permaculture

The rough-mowed trail led through an old field of asters and goldenrod edged with native high bush blueberry and American cranberry, humming with native pollinators. The trail continued through a stand of multiple-trunked ash, red maple, and beech typical of New England’s often cut woodlands. At woods’ edge, native water lilies, and yellow water poppy bloomed in a goodly sized pond. Spruce, yellow and paper birch colonized ledge outcrops and stonewalls defined the pond’s east side. Directly across the pond was what appeared to be an old skid road, more evidence of past logging. A beaver lodge nudged cattails, and at the muddy water’s edge, moose tracks, and scat made a new landscape seem familiar to me.

Those familiar markers and decades of hiking and living in northern New Hampshire’s White Mountains helped make my new home at 1700-foot elevation in the western Massachusetts highlands feel like home. This is the southern limit of a northern forest type and the northern limit of central New England woods where northern species like yellow birch, spruce, and fir meet white ash and red oak. When moving to the new house and fifty acres in 2005, I had no intention to do any large-scale gardening much less farming on what was clearly marginal, poorly drained land. With a new graduate degree, I was changing careers and intended to find a full time job in conservation.

However, plans change and five years later, after receiving a beginning farmer grant, I started Bug Hill Farm. I began by experimenting with black currants planted on the property over 40 years ago by a German doctor. I fell in love with these densely flavored, tart berries beloved in many parts of Europe, and began selling alcohol free cordials made from them at my local farmer’s markets. High tunnel production of raspberries followed, as did ever-expanding plantings of berries. In 2012, we built a commercial kitchen for value-added farm products, so that the farm could sell both wholesale and retail products. 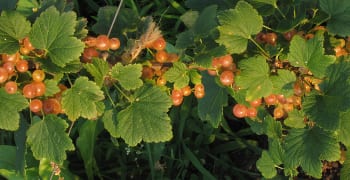 My original intention of managing the land for biodiversity and conservation hasn’t changed, and the farm’s 2010 Natural Resources Conservation Service (NRCS) grant for creating early successional habitat for wildlife has helped support that. With this grant, ten acres of second growth, poorer quality woods were cut, leaving a few “seed” trees of red oak, sugar maple, and mature poplar. Over many years, the loss of early successional habitat, critical to the survival of many species, has resulted in greatly diminished populations of migratory birds and native pollinators. Middle-aged, mostly unmanaged woods now dominate most of New England and may not support great biodiversity. 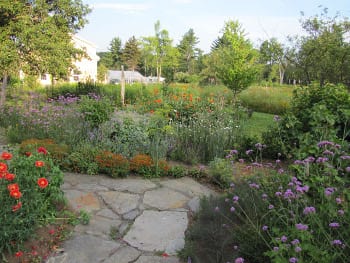 The view from the demonstration garden looks west toward old fields and the high-tunnel greenhouses.

In spite of diminishing species in the mature forest, the public has a negative perception of patch clear cuts, and the resulting re-growth (early successional habitat) appears messy and chaotic. Three years after the cut, I hope the farm may help change that perception with our addition of new trails through regenerating native low and high bush blueberries. These native shrubs and young stands of poplar, cherry, and wild rubus species support increased numbers of migratory birds, insect pollinators, small mammals, and reptiles – wildlife like children, seem to enjoy “messy” landscapes. And by making our land available for exploration by neighbors, we hope to demonstrate the positive changes careful cutting can produce.

In 2012, the farm received a Sustainable Agriculture Research and Education (SARE) grower grant titled Effects of Controlled Disturbance within Early-Successional Northeastern Forest Habitat: Evaluating Soil Quality, Plant Production, and Economic Feasibility. This grant may help new entry farmers who are considering the purchase of marginal lands because of the affordability when compared to prime agricultural land. Two questions faced by those considering this route is how much site disturbance is needed in order to establish some productive cropping and what alternative, perennial crops may be viable on marginal lands where annual row crops are not economically feasible or perhaps even desirable.

With our three-year SARE grant, the farm is creating experimental plots of three types of disturbance (measuring for soil health).The control plots will utilize traditional cut, stump, till, and plant techniques. The other two plots will use non-traditional methods. In one, we will plant directly in early successional habitat, and in the third plot we will use a permaculture technique called hugelkultur. All plots will be planted with three species of berries (native New England elderberry cultivars, a native New England black chokeberry cultivar, and haskap, also called honeyberry, which is native throughout the cool temperate Northern Hemisphere.)

Managing natural succession on the farm includes finding younger people who will succeed me in managing the farm business and the land that supports it. What will the future look like at Bug Hill Farm? Businesses like ecosystems have various stages of growth. The farm is posed for that next stage, and hopefully it will encompass a different style of ownership that includes different ages and interests.

Kate Kerivan has an undergraduate degree in Plant Science from UNH, an M.A. in Ecological Landscape Design from The Conway School, and an M.S. in Environmental Studies (Conservation Biology program) from Antioch University. Prior to starting Bug Hill Farm in Ashfield, MA, she owned Bungay Jar Inn and Gardens in Franconia, NH. To find out more about Bug Hill Farm or to participate in hugelkultur workshops, please contact the farm and come to ELA’s tour of the farm in July!