In September 2009, the Metro Atlanta area experienced record flooding when a major rain event dumped 10+ inches of rain on the region in a three-day period. Local watersheds were already saturated by above-average precipitation in the weeks preceding the event, and the results were devastating to the region, with a cost of $500 million for repair and cleanup. As an aquatic resource management firm based in the Metro area, Aquascape Environmental was involved in recovery efforts immediately. Our Lake Management division was inundated with service requests to remove debris from local impoundments almost as soon as the rain stopped falling – from trash and trees to walking bridges and docks. After those initial weeks of cleanup, however, our restoration division began to see more complicated flood-related challenges as property owners faced significant, landscape-altering erosion caused by the historic flood waters.

In late 2009, the management of Rosemont Apartment Homes in Roswell, Georgia, requested an assessment of streambank conditions on the property. An unnamed tributary flows roughly east to west through Rosemont’s recreational common area, adjacent to the community’s 1.37-acre impoundment. This reach exhibited typical characteristics of a channelized and urbanized stream, including recent channel incision and down cutting resulting in lateral bank migration. Although these conditions had existed to some extent prior to September 2009, they were significantly worsened by the flooding events. By March 2010, the streambank was eroding at such a rapid rate that the integrity of the impoundment was threatened, with a nearly vertical bank slope and minimal riparian buffer vegetation. 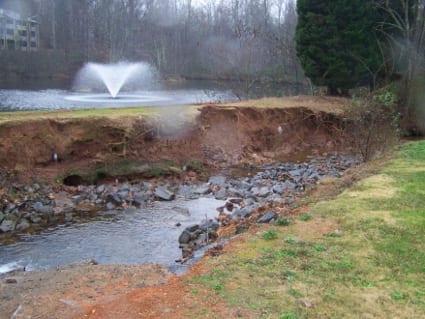 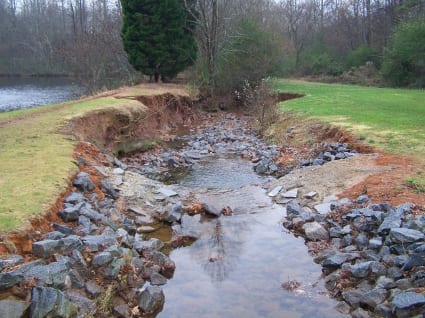 As requested, we completed a thorough assessment of the conditions and developed a streambank stabilization plan to address the problem. An integral component of the design process was drafting an appropriate erosion and sediment control plan to obtain the required regulatory permitting for this project, which consisted of a City of Roswell Land Disturbance Permit, Georgia Environmental Protection Division Stream Buffer Variance and a Pre Construction Notification to the US Army Corps of Engineers of our intent to operate under Nationwide Permit 13. Rosemont then contracted us to implement the plan, which encompassed approximately 105 linear feet of channel banks within portions of both sides of the stream. The plan focused on reestablishing and hard armoring the original contours of the affected streambank in conjunction with soil bio-engineering techniques to restore the riparian vegetative buffer. Hard armoring is a “permanent” impervious engineering approach, which involves gentle grading of the bank followed by placement of appropriately sized broken rock (“rip rap”) to provide a foundation and protect the bank from scouring. Hard armoring was utilized in this particular project due to the severity of the streambank erosion, but we incorporated soil bio-engineering into the overall plan as well to provide long-term stability.

Work on the project began in the first week of December 2010. As a first step, unstable soils were either addressed or removed from within the areas to be stabilized through minor bank shaping activities. Type I rip rap (mix of rocks 24” to 48” in diameter) was installed to re-establish and protect the toe of the bank slope throughout the reach. Compacted fill material was utilized to restore the original contours of the most heavily eroded portions of the banks. Care was taken during the placement of this material to maintain an appropriate cross sectional area throughout the repaired reach, resulting in final bank slopes of 1.5H:1V to 2H:1V. Because the river’s left stream bank served as part of the dam structure of the adjacent impoundment, we used fill materials consisting of properly compacted clay soils. 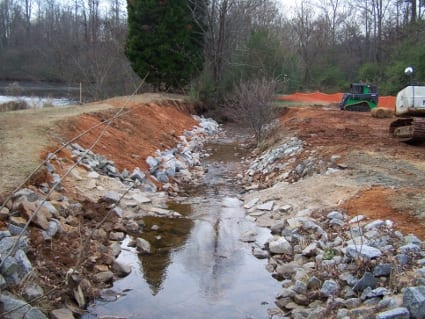 While some portions of the reach exhibited only minor erosion, it was still necessary to perform minor grading in those areas to facilitate the proper installation of the Type I rip rap rock toe protection while also achieving a more uniform bank slope throughout the reach. The downstream terminus of the project was graded to blend the proposed repairs into the existing downstream contours. In addition, the installed rock toe protection was keyed into both the channel bottom and the adjacent streambank in order to prevent future migration downstream and/or undercutting of the repaired areas. 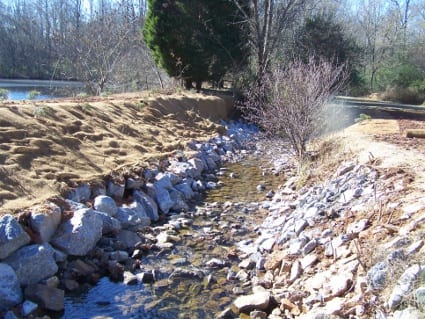 Compacted fill material and Type 1 rip rap have been placed and planting process for re-establishment of riparian buffers is complete (December 2010).

A concrete sill across the active stream channel at the uppermost portion of the reach was severely undercut by the 2009 flooding event. This sill was associated with an existing sanitary sewer pipeline that flows underneath the stream channel. In an effort to stabilize this area against future erosion/channel incision and to protect the existing sanitary sewer, we installed Type I rip rap as a grade control structure immediately below the concrete sill within the undercut areas. We also reestablished the existing plunge pool, which was damaged by the flooding, to a more appropriate dimension and refreshed the rip rap protection to the top of bank throughout the entire feature. Finally, a Type I Rock grade control was installed at the downstream extent of the plunge pool to protect against future rip rap migration and further channel incision.

Upon completion of construction activities, we undertook reestablishment of the riparian stream buffer through the installation of appropriate native vegetation. In consideration of an adjacent sanitary sewer easement as well as the recreational nature of the area for the community, we selected a combination of dormant black willow (Salix nigra) cuttings, installed via joint planting, and low-growing riparian shrub species consisting of Inkberry (Ilex glabra) and Sparkleberry (Ilex verticillata) installed at the top of bank. Finally, an appropriate native seed mixture including both warm and cool season herbaceous species was sown throughout the project area as a temporary erosion control ground cover. 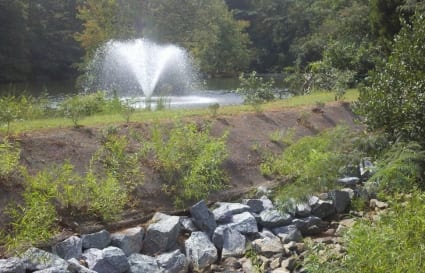 The Rosemont project was completed in mid-December 2010, and the client was satisfied with the results. We returned to repair some localized erosion occurring due to overland runoff from the adjacent common area that was not readily identifiable prior to construction. Property management is ensuring that the growth height of the riparian buffer vegetation is maintained in order to keep the site lines open to the pond and associated fountain, which are focal points for the community. Because we had removed several large woody debris blockages from within the channel as part of the repair process, we recommended routine inspections to ensure that the channel remains free-flowing.

Due to the level of incision of this channel there are no guarantees that the site will fully withstand another 100-year type flood event such as was experienced in 2009. However, the installation of rip rap that is more than triple the size of the previous channel protection, along with the replacement of riparian buffer vegetation, have maximized the potential for long-term streambank stability; in fact, the repair location has experienced more than one “near top of bank” storm event since completion with no noticeable adverse effects.

Paul Slovisky is Vice President for Operations at Aquascape Environmental in Woodstock, Georgia, where he oversees all landscape construction and restoration projects. Paul holds a B.S. in Earth Sciences from Mercer University and is a Certified Professional in Erosion and Sediment Control. He may be reached at paulslovisky@aquascape.net, www.aquascape.net, or http://www.linkedin.com/pub/paul-slovisky/16/9b0/288.

“It’s All About the People”
Soil Biology Basics, Part I