A team of researchers led by a University of Rhode Island professor has completed a five-year study of the Appalachian Trail and developed a satellite-based system for monitoring and forecasting ecological conditions along the trail. One of its initial conclusions is that the invasive species tree-of-heaven is expected to expand northward into New England because of climate change.

Yeqiao Wang, a URI professor of terrestrial remote sensing, said his team’s research combining satellite-based data with ground-based ecological monitoring will be useful in the management of the lands along the Appalachian Trail.

“But our tools aren’t just about managing the trail; it’s about the entire eastern United States,” he said. “We study the trail as a representative megatransect to reflect the ecological conditions of the eastern U.S.” 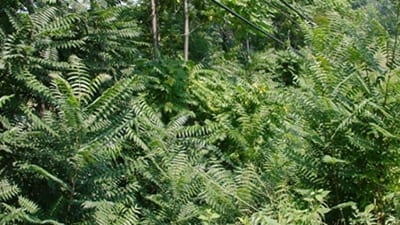 Tree-of-heaven is expected to spread into New England as the climate warms.

In a paper published recently in the journal Philosophical Transactions of the Royal Society, Wang and URI colleagues Peter August and John Clark demonstrate the use of the new monitoring system by focusing on the current status and predicted expansion of tree-of-heaven, a problematic invasive species that was introduced to the United States in 1784 for ornamental planting.

Native to China, the tree has been found to suppress native species and disperse widely by releasing vast quantities of airborne seeds that colonize gaps in forest canopies.

The study found tree-of-heaven populations at 136 out of 4,000 monitoring plots established by the U.S. Forest Service along the Appalachian Trail, mostly in the trail’s central portion in Virginia but also in smaller numbers as far south as North Carolina and as far north as New York. None were found in New England.

“Based on climate models and where we find tree-of-heaven now, the study predicts that the New England states will be suitable habitat for tree-of-heaven by the end of the century,” Wang said. “It is currently distributed in lowland areas, but it could also end up in high elevations to the south of its current range.”

According to Wang, the objective of the broader research project was to create a decision support system for monitoring, reporting and forecasting the ecological conditions of the Appalachian Trail to improve the management of the natural resources and biological diversity of the region.

Satellite-based remote sensing is the most effective way of learning about the large-scale changes taking place along the trail, he said.

Wang noted that the trail’s north-south alignment represents a cross-section of eastern U.S. forests and alpine areas, making it an ideal setting for collecting scientifically valid and relevant data for early detection of undesirable changes to the region’s natural resources.

The 2,175-mile Appalachian Trail runs from Springer Mountain in northern Georgia to Mount Katahdin in central Maine. Along the way it crosses 14 states and intersects with eight national forests, six units of the National Park System, more than 70 state parks, forests and game management units, and 287 local jurisdictions. The trail and its surrounding 250,000 acres of protected lands harbor forests with some of the greatest biological diversity in the country.

In addition to Wang and colleagues at URI, other institutions collaborating on the project include the NASA Ames Research Center, the National Park Service, the U.S. Forest Service, the U.S. Geological Survey and the Appalachian Trail Conservancy. The project was funded by NASA.