By ecopro on May 15, 2013 in Disease Identification and Control

Impatiens downy mildew has changed our view of impatiens (Impatiens walleriana). I think no impatiens should be planted in the Northeast, or anywhere, except in very arid locations such as the Midwest. I heard of many landscapers replacing customers’ impatiens at the landscapers’ expense, once the plants succumbed to downy mildew in 2012. Don’t let this happen to you in 2013. 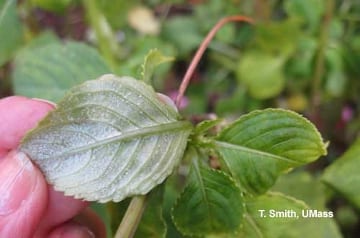 Impatiens downy mildew, caused by Plasmopara obducens, attacked many New England gardens in 2012. In 2011, the disease was first seen in landscapes in eleven states including Massachusetts and New York. In 2012, impatiens downy mildew was found in 33 states including all New England states. On Long Island, near where it was found in 2011, diseased plants were found in early June, 2012. 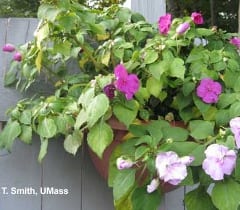 This disease affects all Impatiens walleriana plants (garden impatiens, double impatiens, mini-impatiens, and the I. walleriana interspecific hybrids Fusion® and Butterfly® impatiens), as well as I. balsamina (commonly known balsam impatiens). It does not attack New Guinea impatiens, Impatiens hawkeri.

Downy mildew symptoms typically start with a few yellow or off color leaves that become completely yellow over time. Green or yellow leaves may also curl downward. Infected young plants will be stunted, while mature plants drop leaves and flowers with only a few small leaves remaining on bare stems. A white, downy-like growth may be visible on the underside of infected leaves under cool temperatures (about 60 to 73F) and moist or humid conditions. The white growth is actually spores which can be blown or splashed around and cause more infections.

Only four hours of leaf wetness are needed to initiate new infections. The time from infection to the appearance of symptoms varies from about five to 14 days depending on the age of plant tissue, temperature and humidity. Due to this latency period, infected plants can be shipped and planted without showing any disease symptoms. 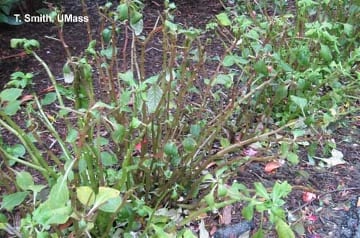 Impatiens downy mildew is here to stay because it overwinters as oospores and also infects our native jewelweed, I. capensis, though so far, symptoms have been mild. Also, many uninformed gardeners will probably plant impatiens this spring, so there will be plenty of Impatiens walleriana plants to infect and spread the disease.

Let’s see this disease as an opportunity for landscapers to educate their customers and the public and not contribute to the problem!

For more information, refer to:
http://extension.umass.edu/floriculture/fact-sheets/impatiens-downy-mildew

Heather Faubert is a Research Assistant at University of Rhode Island Greenhouse. She may be reached at hhf@uri.edu.

Editor’s Note: Consider substituting the following annuals in beds that previously held impatiens, or try out a combination of perennials that will bloom throughout the growing season.

Or peruse the plant lists offered by these institutions:

Where Did All the Ticks Come From?
Seven Steps to Building a Winning Team of Employees!