By Maureen Sundberg on May 14, 2015 in Gardening Basics, Native Plants

Thanks to mandatory water use cutbacks, turf removal rebates, and media reports on the plight of monarch butterflies and European honeybees, California homeowners are in search of California native plants.

There’s a learning curve, to be sure. Many a shopper at the California Native Plant Society (CNPS), Sacramento Valley Chapter’s plant sale was disappointed to learn that lavender is not native to California. Volunteers quickly distracted these new visitors with a tour through the demonstration garden, where Blue Eyed Grass (Sisyrinchium bellum), Foothill Penstemon (Penstemon heterophyllus), and Sticky Monkeyflower (Mimulus aurantiacus) bloom under Elderberry (Sambucus nigra caerulea) and Whiteleaf Manzanita (Arctostaphylos viscida).

At the ‘Ask A Designer’ tables, landscape designers used photos and pencil drawn plans provided by homeowners to create planting plans from the plants available for sale that day. Participants left the consultations with a shopping list, and CNPS received donations to support programs. 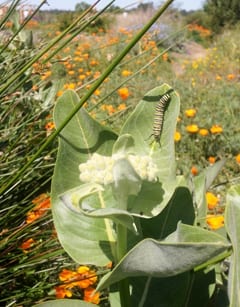 The April sale was the most successful ever. Milkweeds (Asclepias fascicularis and Asclepias speciosa) were depleted within two hours. The California Pipevine (Aristolochia californica) quickly sold out, aided by the cute caterpillars of the Pipevine Swallowtail chomping away at the vines planted along the nursery’s fence. The April self-guided Gardens Gone Native tour had the highest attendance ever as well. 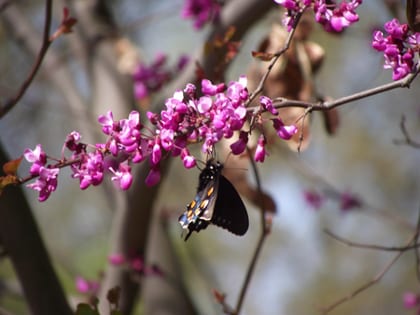 One of the best places to purchase California native plants is at the chapter CNPS nurseries. Since California is ecologically diverse, it makes sense to choose plants native to one’s region. This increases the establishment success rates, and honors the connections between native flora and fauna. CNPS Sacramento Valley has a nursery dubbed ‘Elderberry Farms Native Plant Nursery,’ and all the plants are propagated from the American River Parkway – a regional park that includes riparian island, emergent marsh, riparian scrub, riparian forest, oak woodland and oak savanna, grassland and dredger tailing vegetation habitats (courtesy of the Gold Rush). Thanks to the range of habitats, the nursery is able to provide plants that fit every horticultural niche. 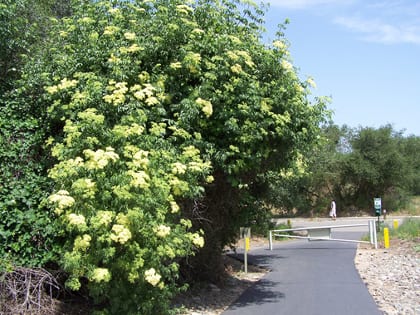 One important and tricky barrier to success with drought tolerant California native plants is irrigation. Unlike Mediterranean plants like rosemary, germander, and olive that have selections adapted to ‘garden conditions’ (overly amended soils, over watering), most California native plants have not yet entered horticultural breeding programs. They are very sensitive to overwatering during hot weather, and can easily perish after one irrigation cycle during our 100-degree heat waves in the inland valleys. Fungal pathogens thrive in the combination of wet soils and heat. Recently planted landscapes with injured roots are very vulnerable to infection.

I always coach my clients to water before and after heat spells, but never during. Fall planting is ideal, but not always possible. Homeowners need to pay more attention to their native plant gardens, but I believe this enriches their lives as they tune into the natural growing cycles. It makes sense to think of these plants entering summer dormancy, a long siesta, and waking up as the weather mellows in fall. Winter is time to grow roots deep into the soil, and spring is time to push off in a burst of vegetative growth and color. After all, we inland valley Californian people do the same.

Bernadette Balics began digging in the dirt, planting flowers, tomatoes, and trees with her father, Louis, a landscape horticulture graduate, just as soon as she could walk. She grew up in northern California, received a BA in genetics at University of California at Davis, and earned a master’s degree in ecological agriculture from Wageningen Agricultural University in the Netherlands. Bernadette owns Ecological Landscape Design where she joins her graduate school studies and working life in her application of ecological principles to landscape design.