By Maureen Sundberg on May 15, 2019 in Climate Change, Invasive Plants

When I moved back to Massachusetts several years ago and started planning my garden, my mother dug out an old backyard planting guide published sometime in the 1970s and sent it to me. Reading it later, I was chagrined to discover that the guide was a “who’s who” of northeast invasive plants. Oriental bittersweet, Japanese barberry, autumn olive, and buckthorn all made an appearance. Invasive plants are ones that are established and spreading with negative impacts on native species and ecosystems.  I was chagrined, but not surprised. 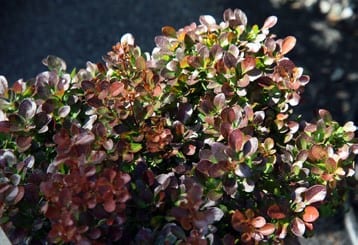 Dwarf red Japanese barberry (Berberis thunbergii ‘Bagatelle’) was a popular shrub in the 1970s, but now it is known as an invasive plant.

Before I began studying invasive plants, I thought that most species arrived accidentally – inadvertently stuck to a woolly sock or passing through the stomach of a woolly sheep, a series of unfortunate events, but nothing to do with me. It turns out that’s not the case. In our enthusiasm for variety, color and beauty, we gardeners and property owners have become the major vectors of introduction and dispersal of invasive plants. More than 1300 plants are identified as invasive in the U.S., and by far the most prominent pathway to their introduction is the ornamental plant trade. Of those species with known introduction histories, 53 percent were introduced and spread as ornamentals (Lehan et al. 2013).

It would be nice to imagine that our unfortunate planting decisions went out with polyester in the ‘70s, but it’s likely that we’re continuing to make similar mistakes. A challenge for controlling invasive plants stems from something invasion ecologists refer to as the invasion “lag phase.” For many species, the time between when a plant is initially introduced and when it is identified as invasive can be upwards of 50 years! By the time a label like “problematic invasive” can be applied to a plant, it’s far too late to eradicate it and often barely possible to control it. Our grandkids may well have my same chagrined reaction when looking at planting guides from the 2010s.

Not only are we good at introducing new invasive plants, we also do an excellent job of spreading them around the country. Usually the spreading around happens early in the “lag phase,” before we recognize a plant as invasive. A recent study analyzing the distribution of native vs. invasive plants in the lower 48 U.S. states, based on the locations of museum records, found that invasives were far more widespread. The median latitudinal range for an invasive plant was 14 degrees (for reference, the lower 48 states span 25 degrees of latitude) vs. only 7 degrees for native plants (Bradley et al. 2015). Longitudinal extent differences are similarly striking (50 degrees for invasives vs. 9 degrees for natives). Introduced as ornamentals, invasive plants easily overcome distance as well as dispersal barriers (like mountains) that otherwise restrict native plants.

Our widespread introduction of invasive plants relative to native plants is particularly alarming in the context of climate change. The current rate of climate change is unprecedented in Earth’s history. The closest analog to our current rate of change happened about 55 million years ago, during the Paleocene-Eocene thermal maximum, when temperatures rose by about 6 degrees C (10.8 degrees F), over a span of 20,000 years. If emissions continue on our current trajectory, it is likely that temperatures will rise by 6 degrees C in less than 200 years. Current change is incredibly fast. Put another way, my home state of Massachusetts could have a climate more akin to today’s North Carolina.

If species are going to survive through this massive and rapid change, they need to move. Many studies have already observed species ranges shifting poleward and upward in elevation in response to climate change. But, plants have a hard time keeping up. Not surprisingly, plants tend to stay rooted in place and are slow dispersers on their own. One study in southern Vermont analyzed forest composition change over 40 years and found that northern hardwoods had migrated up into formerly boreal forest by about 600 feet during that time period (Beckage et al. 2008). To keep up with climate change, those same trees would need to move more like 300 miles over the next 40 years. For the vast majority of species, natural dispersal is just not enough. 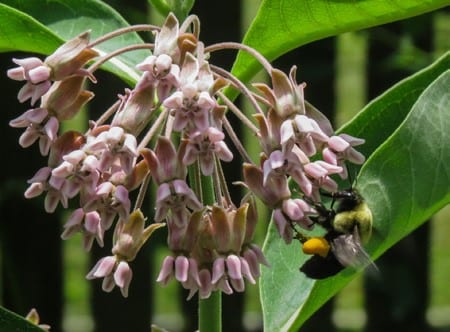 A bumblebee nectars on Asclepias syriaca.

Ironically, human dispersal of invasive plants means that they will have little trouble keeping up with climate change. Scientists have been debating the merits and perils of “assisted migration,” which would involve transplanting native species to help ranges shift with climate change. Species transplanted between continents are 40 times more likely to become invasive than ‘natives’ transplanted within a continent (Simberloff et al. 2012). Transplanting natives is not risk free, but it’s far less risky than the status quo of importing and introducing new species from other continents.  Nonetheless, as yet very few native species have been assisted due to concerns about risk to ecosystems on the receiving end. Yet, most homeowners have few qualms about introducing species from far and wide into our yards. It is these species that will seed ecosystems of the future.

But, is it worth the effort of trying to expand the ranges of native species when we don’t know whether they’ll be able to persist in cooler climates?  One trait of invasive plants is that they tend to have broad ranges and therefore broad climatic tolerances.  Until recently, many narrow ranged native plants were thought to have correspondingly narrow climatic tolerances.  But, recent studies of plant biogeography have cast doubt on that assumption.  For example, a study of trees in Europe showed that their distributions are more closely aligned to the extents of the last glacial maximum some 21,000 years ago than they are to current climate (Svenning & Skov, 2007).  Any assumptions we make about the climatic tolerance of European trees based on their distributions is biased by this ancient barrier to northward dispersal. Similarly, a study of plants endemic to the U.S. that have been introduced as ornamentals showed that these species thrive well outside the climate conditions found in their native range (Bocsi et al. 2016).  The typical species was found in climates 3°C (5°F) warmer than their native range.  Thus, even narrowly distributed native species are likely to establish successfully in warmer zones, ultimately providing that much needed head start on climate change. 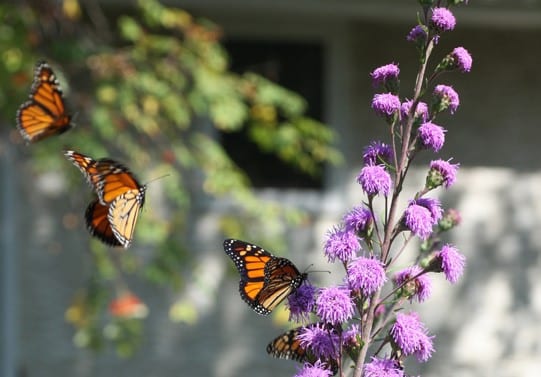 Native plants are like magnets for monarchs and other pollinators.

Planting “local-ish” reduces the likelihood that we will inadvertently introduce an invasive species and also helps to expand the ranges of native species, thus helping them keep up with climate change. A win-win!

If you haven’t seen it already, a great resource for identifying nurseries that specialize in native plants in your area is www.plantnative.org. If you don’t have a specialty nursery nearby, this website also lists plants native to your region that are commonly found in most nurseries. If you’re interested in “assisted migration” of native species, try looking at native plant lists from states that are slightly warmer than your current locale for ideas. Encourage specialty nurseries to consider expanding their stock of native plants to test out greater varieties from the region.  Planting local-ish reduces the likelihood that we’ll accidentally introduce an invasive species, supports native birds and other wildlife, and will give a much needed assist to native species in light of climate change.

Bethany Bradley is an Associate Professor at University of Massachusetts, Amherst where she pursues her interest in how terrestrial ecosystems respond to anthropogenically driven changes, particularly interactions between invasive species, land use, and climate change. She aims to improve forecasting of future changes to ecosystems, particularly risks of non-native plant invasions, using tools from biogeography and landscape ecology. Her research has implications for invasion ecology, natural resource management, and biological conservation.

This article was reprinted with permission of Wild Ones Journal.