There are many types of soil additives and fertilizers used to improve the structure and functions of soil. One that has re-emerged in the last five years is biochar, a solid material obtained from the thermochemical conversion of biomass in an oxygen-limited environment—which creates a fine-grained, highly porous charcoal. Interest in biochar has increased recently as horticulturalists are looking for sustainable ways to improve soils and decrease their use of chemical fertilizers.

From the horticultural perspective, the key benefits of biochar include reduced soil bulk density, increased nutrient and water retention, and decreased nutrient leaching. With this rise in interest, new questions come up. How much biochar should be used in soils? How should biochar be applied? What types of biochar fit specific types of soils? How do we know if a particular biochar actually helps a particular soil retain nutrients and water? How do we know what is in the biochar? The answers can vary depending on the purpose of the product as biochar can be used as a product itself or as an ingredient within a blended product. In addition to use as a soil improvement device, biochar can also be used for remediation and/or protection against particular environmental pollution and as an avenue for greenhouse gas (GHG) mitigation. 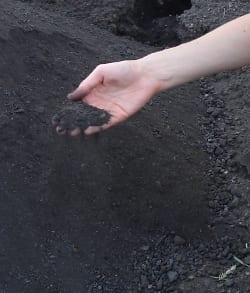 Poultry litter biochar before it is mixed with soils

Before looking at new research on biochar in soils, let’s examine the origins of biochar. The concept is modeled after a process begun thousands of years ago in the Amazon Basin, where islands of rich, fertile soils called terra preta (“dark earth”) were created by indigenous people. Anthropologists speculate that cooking fires and kitchen middens along with deliberate placing of charcoal in soil resulted in soils with high fertility and carbon content, often containing shards of broken pottery. These soils continue to “hold” carbon today and remain extremely nutrient rich compared to the surrounding soils. Biochar can be found in soils around the world as a result of indigenous soil management practices and natural vegetation fires. Natural biochar from historic prairie fires is a key element of the fertile Midwestern soils in the US.

Until recently, it was believed that biochar’s beneficial soil impacts were seen primarily in soils with significant constraints, but two recent publications examine its impact on more fertile Midwestern agricultural soils, showing that biochar can benefit even healthy, fertile soils. Two studies published in 2010 in Geoderma highlight the potential of biochar additions to increase nutrient holding capacity and overall soil quality. The first study entitled “Biochar impact on nutrient leaching from a Midwestern agricultural soil” by Laird et al[1] suggests that the addition of biochar increases the capacity of soils to retain nutrients and reduce nutrient leaching. The research team added swine manure to a typical Midwestern soil and found a significant decrease in leaching of Nitrogen (N), Phosphorous, Potassium, Magnesium and Silicon from manure-amended soils as the biochar application rates increased. This research highlights the potential impact that biochar can have in production agriculture. The second study from Geoderma entitled “Impact of biochar amendments on the quality of a typical Midwestern agricultural soil” by Laird et al[2] found that biochar amendments in the soils (at the rates of 0, 5, 10, and 20 g-biochar kg−1 soil) showed greater water retention, larger specific surface areas, higher cation exchange capacities, and higher pH values relative to the un-amended controls. Additionally, the research found that the biochar amendments significantly increased total N (up to 7%) and organic carbon (up to 69%). The results from both studies highlight the role that biochar can play in improving nutrient and water holding capacities in fertile soils. 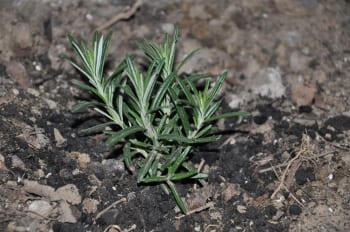 A rosemary plant growing in a compost biochar medium.

A recent study out of Rice University (featured in Rice News) entitled “Hydrologic Properties of Biochars Produced at Different Temperatures,” found that the temperature of biochar production impacts the ability of biochar to make water available to plants. Specifically, the study lead by Rice biogeochemist Caroline Masiello, highlighted that biochar produced at temperatures of 450 Celsius or higher was most likely to improve soil drainage and make more water available to plants. It also had superior carbon storage ability. Biochar produced at lower temperatures may repel water and was not found to be as stable.[3] Therefore, it is important for consumers to be aware of the specific production conditions of the biochar that they are adding to soils.

An interesting study came out in 2010 that examines the impact of biochar not in terms of nutrient addition but of stimulating plant growth. The paper “Biochar impact on development and productivity of pepper and tomato grown in fertigated soilless media” by Graber et al[4] found that when biochar-treated pots were compared against controls, plant development was enhanced. The impacts of biochar on plant development were not due to direct or indirect effects on plant nutrition as both the biochar-treated pots and the control had the same leaf nutrient content (the biochar was a nutrient-poor biochar to ensure the same nutrient content). The research team found two alternatives to explain the improved plant performance under biochar treatment; first, that the biochar “stimulated shifts in microbial populations towards beneficial plant growth promoting rhizobacteria or fungi, due to either chemical or physical attributes of the biochar” and/or that the “low doses of biochar chemicals, many of which are phytotoxic or biocidal at high concentrations, stimulated plant growth at low doses (hormesis).”

What is next on the horizon? More and more research is being published each month, and there will be new research highlighted and presented at the upcoming 2012 US Biochar Conference (July 29 – August 1) in Sonoma CA. The International Biochar Initiative (IBI) website and newsletter include regular updates on upcoming biochar conferences, symposia, and research opportunities, as well as profiles of research groups and producers and users of biochar. IBI also tracks all peer-reviewed publications through a bibliography and has general information on biochar (including application guidelines) on the website.

Of great significance to the biochar field, the international biochar community is currently voting on Standardized Product Definition and Product Testing Guidelines for Biochar That Is Used in Soil, produced by IBI. These Biochar Guidelines are the first internationally developed standards created to encourage further development of the biochar industry by providing standardized information regarding the characterization of biochar materials to assist in achieving more consistent levels of product quality and to provide consumers with consistent access to credible information regarding the specific properties of biochar.

Thayer Tomlinson is the Communications Director at the International Biochar Initiative (IBI), a non-profit organization working to promote the development of sustainable biochar systems. She may be reached at info@biochar-international.org.