text and photos by Eileen Stark

Plants, the primary producers on this planet, belong to irreplaceable, intricate ancient ecosystems, within which they support and depend on other species – both flora and fauna – to survive. I like to think of it as an everlasting give and take. These systems are so complex that even minor degradation messes with their function, and when we completely destroy them it’s next to impossible to bring them back. Yet it’s crucial that we try.

Among the most imperiled ecosystems in North America are the Pacific Northwest’s oak ecosystems ruled by Quercus garryana, as well as its associated ecosystems. This oak’s common name simply depends on location: those in British Columbia and Washington prefer “Garry oak,” while Oregonians like to call it “Oregon white oak.” Whichever nickname you prefer, the gifts bestowed by this majestic, slow-growing, long-lived tree are mammoth. 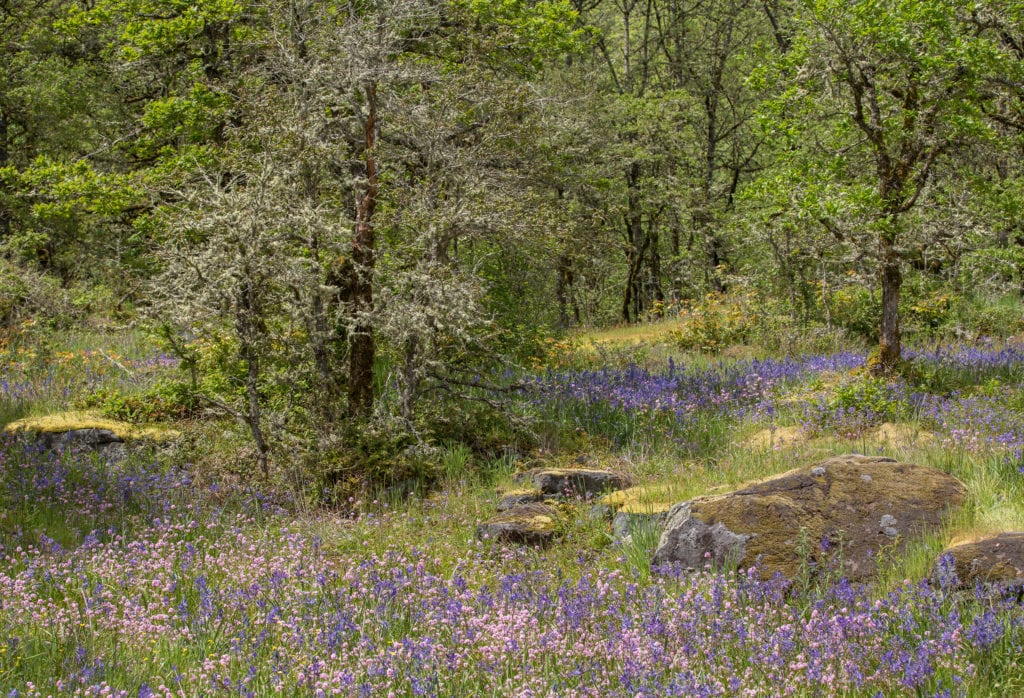 Preserved and maintained by The Nature Conservancy, the Camassia Natural Area (Clackamas County, Ore.) is a mosaic of open prairie, wooded wetland, and the increasingly rare Oregon white oak savanna.

Like other native foundation tree species, Oregon white oak peacefully regulates ecosystem processes like nutrient cycling and energy flow, creating benefits to wildlife (and the rest of us) that seem endless. Besides the obvious shade, beauty, and exchange of oxygen and carbon dioxide these trees offer, inconspicuous flowers – which typically bloom in late spring – provide for pollinators like native bees, while the buds of forthcoming rounded, deeply lobed leaves play host to the larvae of gray hairstreak, California sister, and propertius duskywing butterflies. Studies show that the genus Quercus hosts more caterpillars and other insect life than any other genus in the northern hemisphere. This proficiency is especially important during breeding season, when the vast majority of land birds consume, and feed their young, highly nutritious larvae, adult insects, and spiders – not seeds or fruit. Other studies show a higher diversity of bird species in oak forests than in nearby conifer forests. 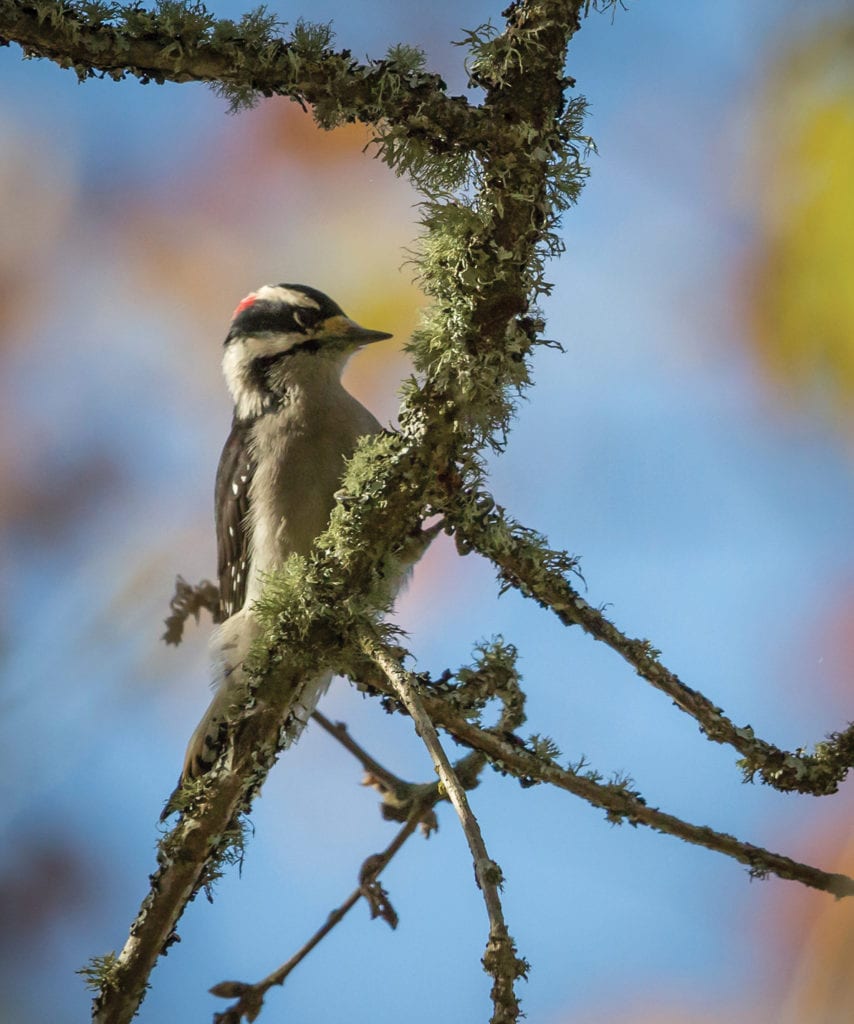 In addition, cover, perches, and nesting habitat go to birds such as woodpeckers and vireos, as well as native squirrels. Oaks’ acorns sustain squirrels and other mammals, as well as many bird species. Fallen leaves, which might provide habitat for amphibians and reptiles, slowly break down into a rich, particularly nutritious leaf mold that supports soil-dwelling invertebrates and numerous fungi that allow neighboring plants to thrive. Sugars and carbon are provided for mycorrhizae, which reciprocate with nutrients for the trees. Intact bark creates microhabitat for mosses, as well as lichens that supply food, shelter, and nesting material, while loose bark (and twigs) contribute to nest building as well as browse for deer, which in turn feed carnivores like cougars.

And as oaks deteriorate with advanced age (which can be 500 years), they continue to deliver. Dead trees can last many years as snags, which provide food, nesting material, and housing to cavity nesters like owls, kestrels, and chickadees, as well as bats that may roost in old holes or under loose bark. 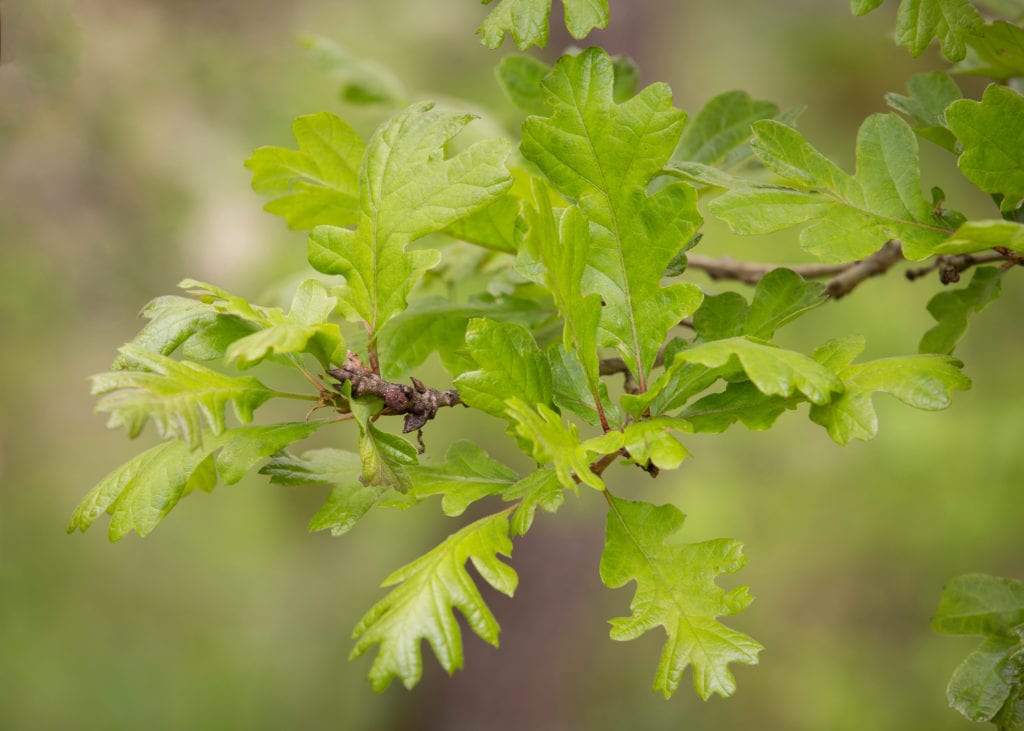 Elevation, climate, soil, and water persuade Oregon white oak to vary immensely in habit and size. While it thrives in cool, coastal areas and near the edges of streams and wetlands where it tolerates seasonal flooding, it also flourishes in droughty inland sites where it may grow both individually and in groves on low hills surrounded by grasslands. When it occurs on gravelly sites or rocky slopes with thin soils, it often has a shrub-like or scrubby habit. Along the blustery Columbia River Gorge, where it grows with little rainfall and atop hundreds of feet of layered basalt, harshly battered trees grow gnarled and hang on thanks to an extensive and strong root system. But within the richer, deeper, riparian soils amongst tapestries of dazzling wildflowers and grasses in the Georgia Basin-Puget Trough-Willamette Valley ecoregion of British Columbia, Washington, and Oregon, it may act as a keystone structure, typically growing a very broad canopy, and reaching heights up to 100 feet over hundreds of years. The ecoregion includes savannas (grassland with trees scattered at least 100 feet apart), upland prairies (another type of grassland), wet prairies, and shady oak woodlands with a continuous or semi-open canopy. I’ll call them, collectively, prairie-oak ecosystems. 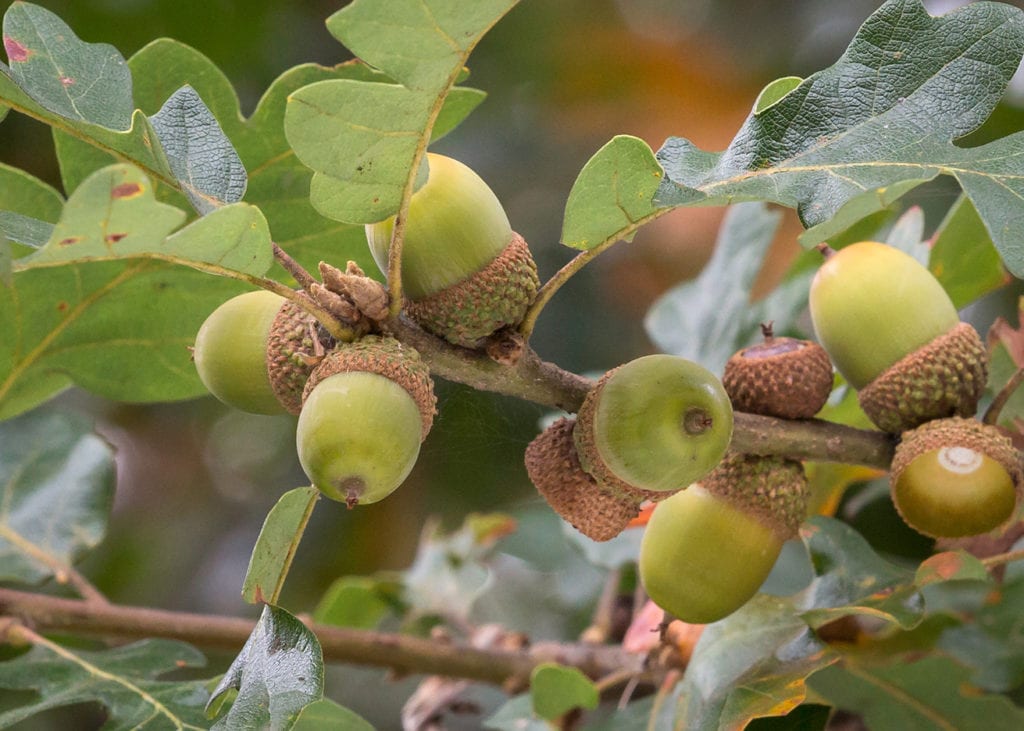 Nutritious acorns are an important food source in winter for birds and mammals, including the threatened Western gray squirrel.

To really appreciate an oak, it’s helpful to know something about its unique ecosystems that once provided some of the richest habitat in the world. The historic range of Q. garryana stretches from low elevations of southwestern British Columbia (including Vancouver Island and nearby smaller islands) into California. In Washington, it occurs mainly west of the Cascades on Puget Sound islands and in the Puget Trough, and east along the Columbia River. In Oregon, it’s indigenous to the Willamette, Rogue River, and Umpqua Valleys, and within the Klamath Mountains.

When pioneers and naturalists first encountered prairie-oak ecosystems, they found a breathtakingly beautiful and complex mosaic of plant and animal life. But the landscape was not untouched or pristine. Aboriginal peoples managed parts of the ecosystems following the last glacial period, frequently using prescribed burning to boost edible plant productivity, hunt wildlife, limit the growth of conifers, and facilitate travel, particularly in the northern parts of the oak’s range. Harvesting of plants such as camas (Camassia spp.) and chocolate lily (Fritillaria affinis) also caused soil disturbance, but their eco-cultural manipulations pale in comparison to what came later. 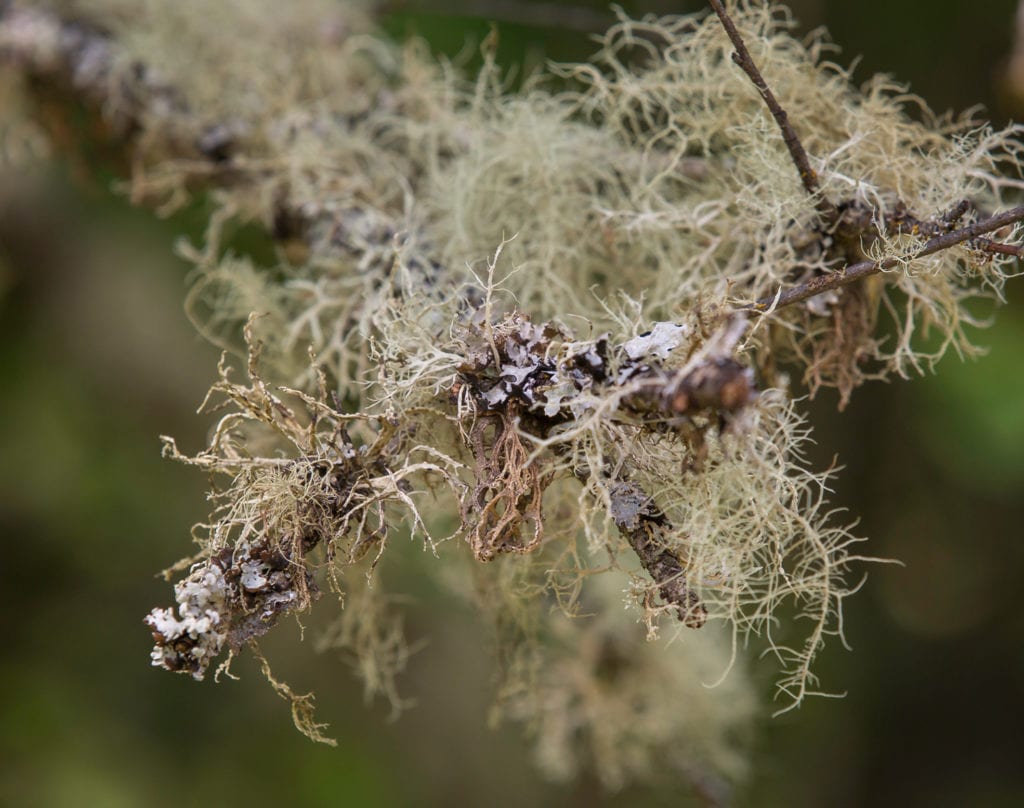 Over 100 kinds of lichen occur on Oregon white oaks, where they may capture nitrogen, provide food, shelter, and nesting material, and discourage insects and fungi.

Since Euro-American settlement, as much as 99 percent of the original prairie-oak communities that were present in parts of the Pacific Northwest have been lost and many rare species dependent on them are at risk of extinction. Extensive destruction and fragmentation began with settlement in the 1850s, with clearing, plowing, livestock grazing, wildfire suppression, and cutting of trees for firewood and manufacturing. Prairie wetlands bejeweled with wildflowers were drained and ditched. Later, subsidies to ranchers encouraged more destructive grazing, while urban sprawl and agricultural use, fueled by human population increase, intensified. Invasion of nonnative species, and the encroachment of shade tolerant and faster growing species – that proliferate with fire suppression – outcompeted oaks and displaced or decimated additional native flora and fauna. Prairie-oak ecosystems and associated systems continue to disappear, and isolation of the tiny remaining fragments prevents the migration of wildlife and genetic material from one area to another. Other detrimental factors include diseases and parasites, climate change, and the loss of wildlife that cache acorns and perform other functions. 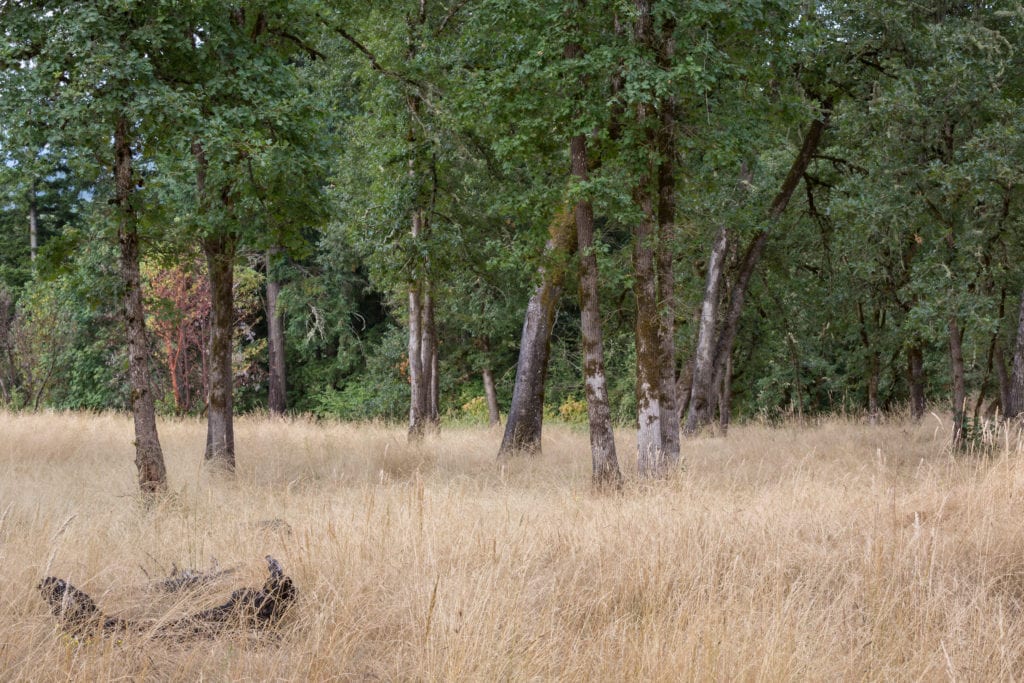 Despite continual destruction, there is a renewed and growing appreciation for the diversity and beauty of these habitats, motivated by recognition that we are responsible for what’s been destroyed, an admiration for the interconnected wild species the habitat supports, and a reverence for an iconic, magnificent tree. Intervention has become intensive, and collaborations and partnerships – as well as private landowners who are key partners – are working to reverse the downward trend with preservation, restoration, and management tools, although “a major restoration challenge is restoring wet prairie habitat to a level at which it can maintain resistance to invasive species,” according to the Institute for Applied Ecology. And regeneration of oak seedlings is essential, but is often difficult. Acorns look tough, but they are viable for only about a year and may be subject to parasitism, weather extremes, and genetic isolation. Consequently, just a small percentage become trees. Two independent studies determined that oak seedlings do best when caged, but protection from other deterrents – drought, competing plants, and rodents – is important, depending on location.
Regional groups include the Garry Oak Ecosystems Recovery Team , South Puget Sound Prairie Landscape Working Group, and the Cascadia Prairie-Oak Partnership.

Try It at Home

While the maintenance of only fragments of a past ecosystem is a poor alternative to former richness, if you live in the ecoregion (or other impoverished oak-dominated ecosystem) and want to help, choose this native tree. Even a single isolated tree can be a critical habitat structure on the landscape.

An Oregon white oak needs a mostly sunny, well-drained site that can accommodate its eventual size (20-50 feet wide, depending on spacing). Although when grown on poor, dry, rocky sites it will grow quite a bit smaller and have a shrubby habit. When planting more than one, space trees 20 to 60 feet apart, using the closest spacing only in dry, rocky terrain. It may be most helpful to visit a nearby natural area and then try to mimic nature’s arrangement. 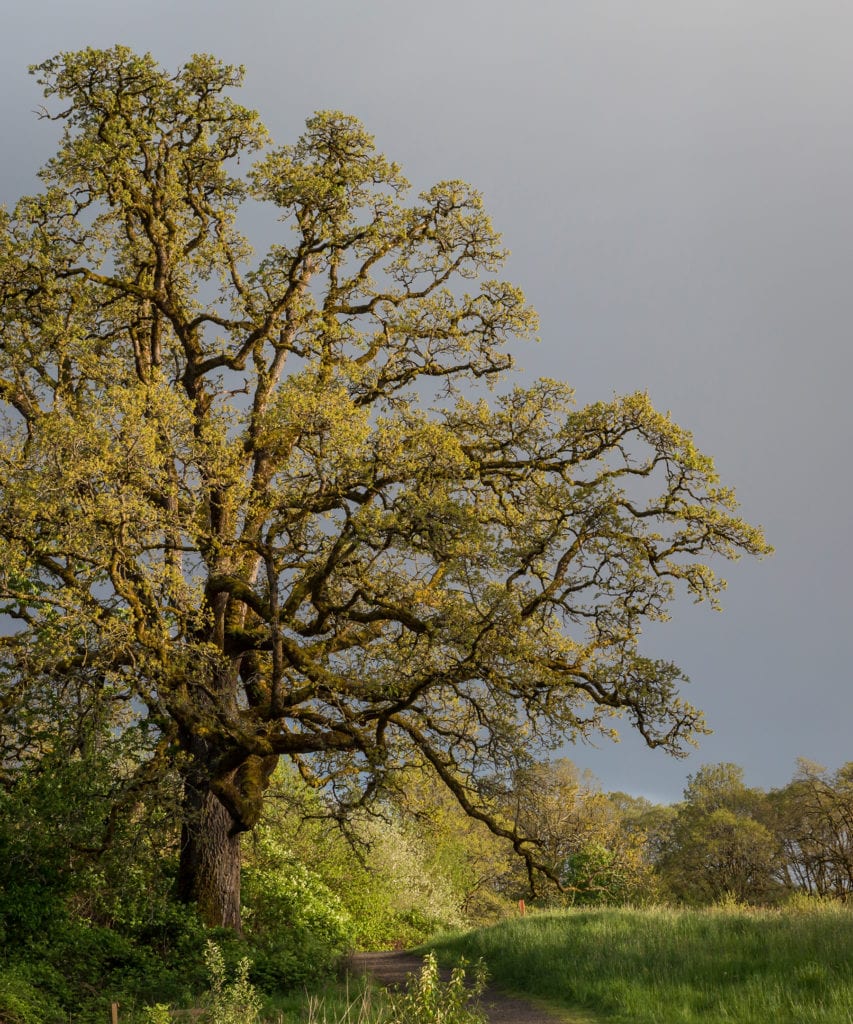 To maintain genetic integrity, choose trees or seeds that originated from trees close to your location and from similar terrain.  For best results, plant dormant saplings in late fall after rains begin. Apply about three inches of an organic mulch (after watering) to reduce evaporation and keep weeds (that can steal water and nutrients) down. I prefer leaf compost, spread out to the tree’s drip line and kept about a foot from the trunk to prevent rot.

Though this species is drought tolerant, provide ample summer water, deeply and infrequently, until established. During the first summer I like to water roughly every five days with about 10 gallons of water that’s applied so that it sinks in slowly. During the second and third summers, water once a week, 10-15 gallons, being sure to water out to the root zone and beyond – root spread can be up to twice that of the crown. If severe heat and prolonged droughts appear to be stressing a young tree, provide more water. After the first few years it may do fine on its own, but do water it (deeply) if it appears to be drought stressed. Keep the area well weeded and don’t stake trees unless they are in very windy areas – they’ll grow much stronger if left unsupported. Keep in mind that soil compaction, lawns and irrigation systems around water-sensitive oaks are a major cause of their decline in residential areas. Find more information on planting Q. garryana at https://www.fs.fed.us/pnw/pubs/pnw_gtr804.pdf. 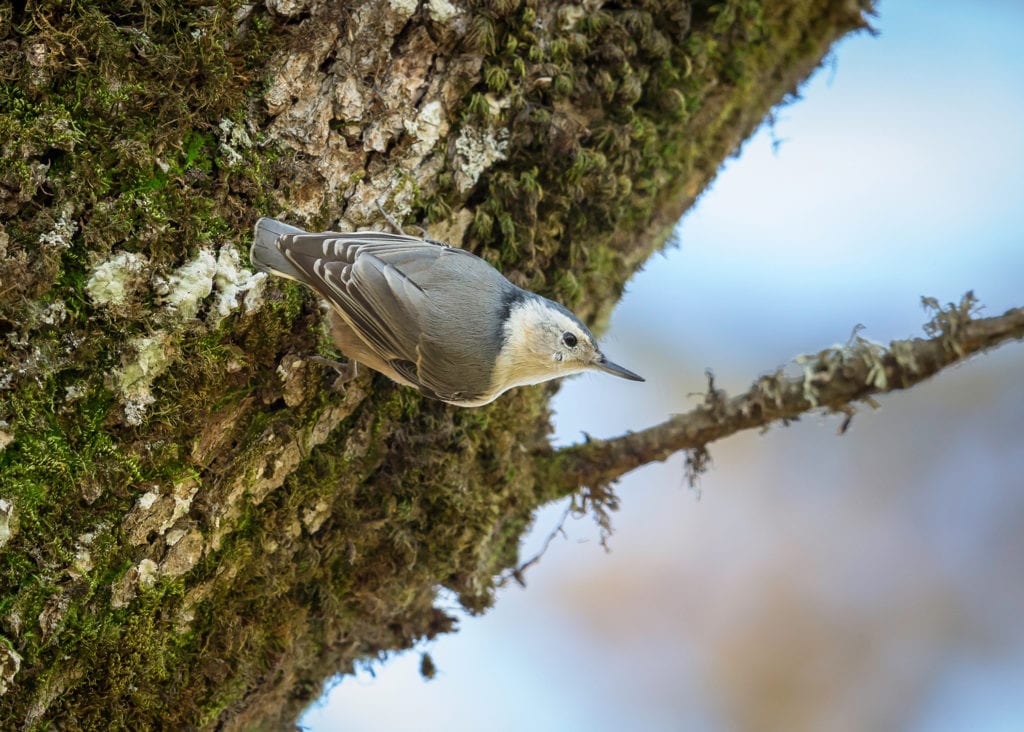 As with other native species, oaks will function best when grown within a habitat and community type that consists of plants that evolved together and need the same conditions. Figuring out which community occurs in your area requires a walk in a natural area where species, as well as nature’s organization, can be learned. Also check out this Ecoregional Assessment, or try your local soil and water conservation district or native plant society chapter. The following publications may also be helpful:

Other ways to help prairie-oak ecosystems (or any wild space in your area):

Eileen Stark is a biologist, conservationist, and owner of Second Nature Garden Design, which specializes in wildlife-friendly landscape designs and consultations that encourage natural function. She is also the author and main photographer of Real Gardens Grow Natives: Design, Plant, & Enjoy a Healthy Northwest Garden, published by Mountaineers Books in 2014. Eileen may be reached through her website at www.realgardensgrownatives.com.