by David A. Orwig

New England has an expansive landscape filled with a wealth of almost 33 million acres of forests. The trees that comprise these woods, wetlands, town forests, community parks, and back yards provide important habitat, store valuable carbon, help provide clean air and water, and of course yield a variety of wood products. Global transportation and human actions have helped introduce forest pests into many portions of the U.S., transforming forests and communities by leading to tree decline and mortality. This article focuses on several important forest pests that are already present or likely will enter New England woodlands soon (hemlock woolly adelgid, elongate hemlock scale, Asian longhorned beetle, and emerald ash borer). Extensive facts on life history and treatment options are beyond the scope of this article, which is rather intended to introduce readers to a few of the many forest pests to be aware of in the region. 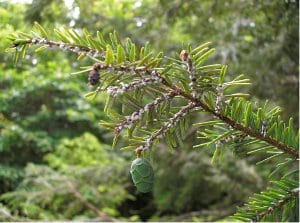 Our beautiful eastern hemlock (Tsuga canadensis) trees, capable of surviving decades in deep shade and centuries in our forests, provide irreplaceable habitat for a variety of wildlife species in forests, along streams, and in back yards. The aromatic branches on these evergreens are currently under siege from two different invasive hemlock pests, the hemlock woolly adelgid (HWA; Tsuga canadenis) and the elongate hemlock scale (EHS; Fiorinia externa). HWA, an aphid-like insect, entered the US during the 1950s while EHS entered during the early 1900s. Since then both pests spread to the north and south and infest hemlock throughout most of the eastern U.S. north to Maine. The HWA has two generations per year and is found on the underside of hemlock branches where it settles and feeds at the base of the needles. In winter through mid-summer, HWA is easily seen due to the white woolly material that encloses the adults and protects the 50 – 150 eggs that each insect is capable of producing (Figure 1). 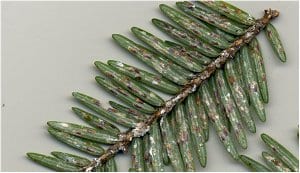 Over time the insect drains the reserves of the tree and results in needle loss, branch loss, and mortality within four to ten years. Fortunately, New England receives cold winter temperatures that often dip below -20oC (- 4oF), leading to HWA mortality and temporary population declines. Often when looking at hemlock branches for HWA, another pest is also seen on the needles themselves, the EHS. This scale insect has one generation per year in New England, feeds directly on the needle with a piercing mouthpart, and is covered by a waxy protective cover (Figure 2). EHS often co-occurs with HWA but rarely kills hemlock when feeding alone on the tree. 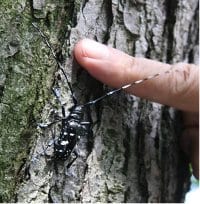 Two pests particularly damaging to our hardwood trees are also lurking in or nearby our forests. The Asian Longhorned Beetle (ALB; Anoplophora glabripennis) a pest native to China and Korea, feeds on over 20 different hardwood hosts, especially maple (Acer) and aspen (Populus) species. This large insect (Figure 3) lays eggs under the bark of tree boles and branches that develop into large, wood feeding larvae inside the tree that eventually develop over one to two years into adult beetles that eat their way out, leaving a large, circular exit hole (Figure 4). Trees can survive even heavy ALB infestation for at least five to six years, but extended infestations on the same tree would eventually lead to the tree falling apart. A widespread infestation of ALB was recently found in Worcester, MA in 2008 that infested thousands of maple trees along streets and in yards, and for the first time in North America, spread and infested close-canopied forests.

The emerald ash borer (EAB; Agrilus planipennis), a beetle also native to Asia, feeds exclusively on our native ash (Fraxinus) trees. First detected in Michigan in 2002, it has since spread to southern Canada and portions of 15 other states, including southern New York. EAB lays eggs in the bark of ash trees which develop into larvae that bore into the tree and eat the inner bark and phloem, creating “S”-shaped galleries along the way and interrupting the flow of nutrients and water within the tree. The larvae overwinter as pupae and emerge as adults the following spring, leaving a characteristic “D” –shaped exit hole. Trees usually die within two to four years of heavy EAB infestation and over ten million ash tree have already succumbed in North America. 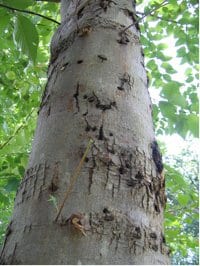 ALB and EAB can literally transform neighborhoods – sobering before and after photos along streets infested with these insects are eerily reminiscent of the once American elm (Ulmus americana)-lined streets wiped out by Dutch Elm disease early in the 20th Century. Clearly, awareness and early detection are critical for minimizing the impact these pests have on neighborhoods and in forests. A dramatic case in point is the recent find of ALB in the parking lot of Faulkner Hospital near Boston, MA, where it was restricted to only six trees. In contrast, ALB flourished undetected for at least ten years in Worcester, MA and lead to the removal of almost 30,000 trees and the chemical treatment of over 100,000 additional non-infested host trees. In addition, preventative measures like not moving infested wood cannot be overstated! Firewood movement has lead to the widespread, long-distance dispersal of EAB well outside the original quarantined boundary of EAB infestation and is a major vector of EAB and many other pests.

These are but a few of the pests that infest or threaten our precious trees in New England. Many others are out there like winter moth (Operophtera brumata), a pest that feeds on many oak (Quercus) trees in coastal regions of New England and European wood wasp (Sirex noctilio) which feeds on North American Pine (Pinus) species and is currently found in western New York State. To find out more about these various pests, how to treat host trees, and/or to report an invasive pest, the following websites are particularly useful: www.aphis.usda.gov, www.na.fs.fed.us/fhp, and www.emeraldashborer.info.

David Orwig has been a forest ecologist at Harvard Forest since 1997. His research interests encompass all aspects of forest ecology, with particular emphasis on old-growth forest dynamics, dendroecology, and the role of land use history and disturbance on forest structure and composition. These approaches have recently been used to examine forest damage, environmental changes, and related ecosystem processes associated with hemlock woolly adelgid outbreaks in New England hemlock forests. David may be reached at orwig@fas.harvard.edu