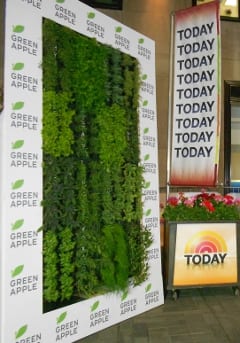 The herb wall became a source for herbs during the Earth Day cooking demonstration.

When the Today Show contacted George Irwin at Green Living Technologies International (GLTi) about included living walls in their Earth Day program, Irwin turned to Trevor to design and create the six freestanding 4’ by 8’ panels that would showcase GLTi’s wall systems. One edible wall design was requested for a cooking segment by chef Giada De Laurentiis to provide fresh herbs for salad, pesto, and beverage. The other five ornamental walls would appear as backdrops throughout the program. 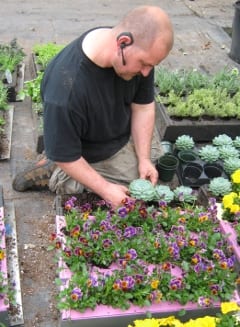 The wall featuring a butterfly design incorporated succulents and violas.

After receiving a phone call late on a Friday night that confirmed the project, Trevor quickly designed the panels and gathered materials. After completing design concepts, Trevor and partner Christina Donovan prepped the wall panels which included a large purple butterfly motif on one set of panels and painting the herb wall panels with black chalkboard paint for plant labeling. 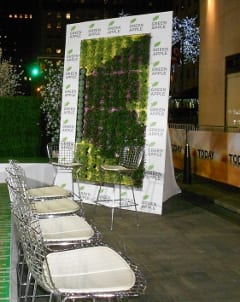 Following the prep, there ensued four days of planting. With little lead time, Trevor’s wholesale greenhouse connections, with readily available plant material, allowed for selection of well-chosen colors and textures to complement the designs. The butterfly panel popped with purple and bronze viola wings and a body created from fist-sized sedum. Deep burgundy coleus became the trunk of a tree and chartreuse coleus and pink begonias became a blooming tree canopy. 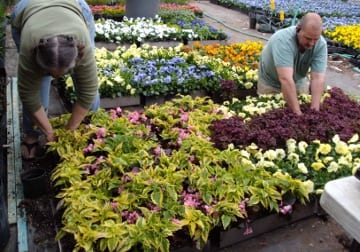 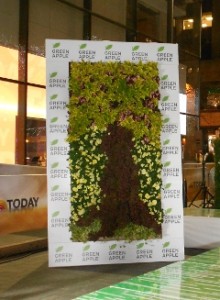 Coleus and begonias create the effect of a living tree used as a general backdrop on the Earth Day Today Show.

With all the plantings in place, the walls were packed up and delivered to Rockefeller Plaza, New York, for assembly in the early hours on April 22. 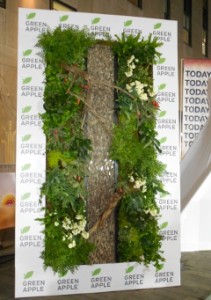 An aerial view of a woodland forest inspired a design complete with flowing stream.

After the show, all the panels were donated to Green Bronx Machine. If you missed the Earth Day Today Show, you can view excerpts on Trevor’s website: www.livingwallsboston.com.

Editor’s Note: In addition to living walls, Trevor creates chemical-free, natural swimming ponds. He will conduct a tour of one of his projects in Sandwich, MA, on June 5. View the pdf with details.

Seven Steps to Building a Winning Team of Employees!
Carried Away: A Keynote Speaker Finishes His Message