A seed for a project with the Town of Lexington was planted at the 2016 Massachusetts Trails Conference, when I attended a workshop presented by Jordan McCarron, Conservation Land Stewardship Manager for the Town of Lexington, MA. I had recently assumed my post-retirement role as a “Johnny Appleseed-for-edible-natives,” and I offered to collaborate on a project in Lexington. Jordan already knew me from a wild edibles walk I led in 2015 and responded with enthusiastic interest.

Ultimately, Lexington’s Willard’s Woods Conservation Land emerged as the top candidate, bolstered by Jordan’s realization that there was an excellent opportunity to incorporate native edible plants into the final phase of the stream daylighting project taking place on that property. The earth moving, bridge installation, and associated construction had recently been completed.

In the summer of 2016, Jordan and I conducted a site visit to the daylighting project area, which primarily consisted of the newly-daylighted stream, from North Street upstream to and including the area around the former pond (now transitioning to a wetland). I followed up the site visit with a list of recommended edible native plant species that, while I did not observe them growing in the daylighting project area at Willard’s Woods, I thought would do well if planted there in appropriate locations. 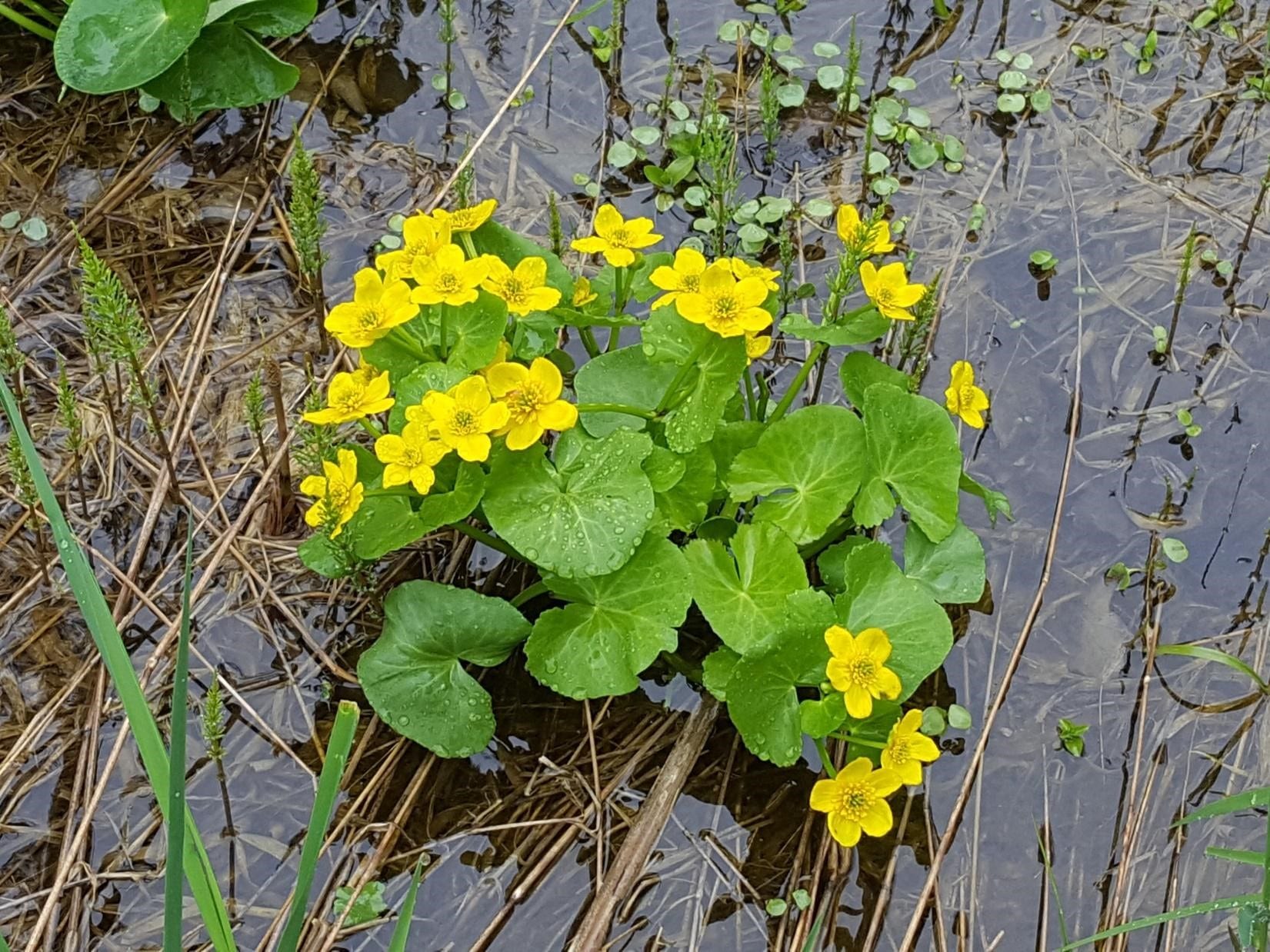 A beautiful, spring-blooming Marsh Marigold (Caltha palustris) is one of the species planted at Willard’s Woods in Lexington, MA as part of an edible native species planting project.

In developing my plant lists, I largely draw upon knowledge acquired and observations made over many decades of being out in nature. But, I also track which plants like to grow in which habitats and/or which species like to grow in association with one another (the technical term for that is a “natural community.”) In this case, the project area consisted of riparian (streamside) habitat, pond/wetland habitat, and adjacent sunny meadow and shady woodland areas, so I picked species I had seen naturally occurring within those types of habitats in eastern Massachusetts.

Here are some factors I typically consider in determining specific planting locations:

For most of my edible native planting projects, the plants come from my nursery. In the case of Willard’s Woods, Jordan had money left over in the daylighting project budget to pay for plants. Jonathan Gawrys of SumCo Eco-Contracting was the restoration project manager hired for the daylighting project; he agreed to purchase the plants needed for the project. This allowed me to save plants from my nursery for use on other projects that did not have sufficient funds.

On April 14th, 2017, Jordan, Jonathan, and I conducted another site visit to firm up how many plants of which species we’d need for our planting day, scheduled for two weeks later. We flagged specific locations to indicate where the plants would go.

In the end, plants for the site came from two sources. Johnathan brought most of the plants (purchased from his supplier, Pierson Nurseries, in Biddeford, ME and paid for by the Town of Lexington). I supplemented with a donation from my nursery of plants Pierson Nurseries was unable to supply. 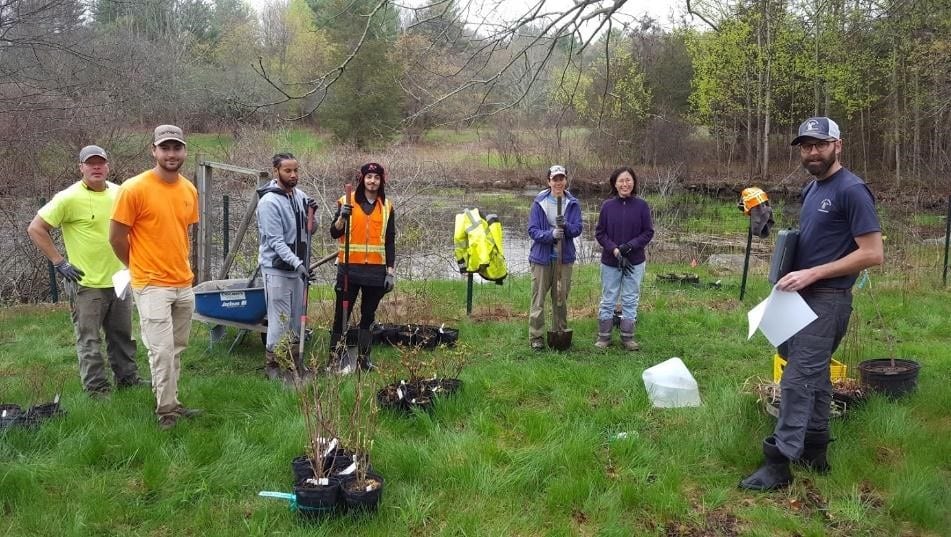 The planting day took place on Friday, April 28, 2017, which, appropriately enough, coincided with the local and national observance of Arbor Day. Though Jordan had to leave Willard’s Woods during the middle of our planting to take part in an official Arbor Day ceremony elsewhere in Town, thanks to the skilled volunteers and contractors crew, the planting went smoothly.

How are the plants doing (nearly) three years later?

Well, frankly, it is a mixed bag. About two-thirds of the plants we planted are still there and doing well, which is an acceptable percentage. One helpful factor was that many of the plants were planted inside a fence surrounding the former pond, erected to keep dogs out of that sensitive habitat. This fence is serving as a de facto deer fence, so species planted inside the fence (e.g., Basswood, Spicebush, Swamp Rose Mallow, Nannyberry, and some of the Hazelnuts) were protected from deer browsing. 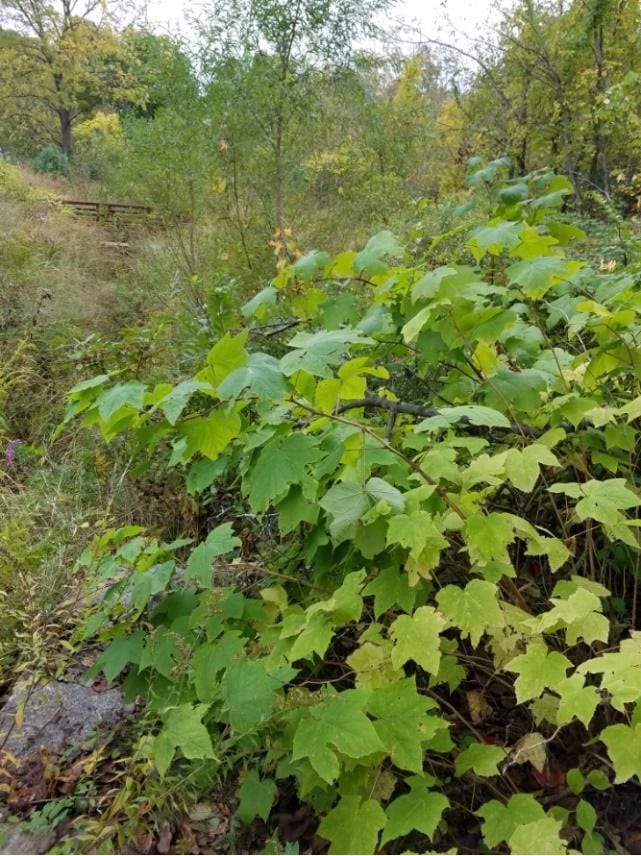 Flowering Raspberry (Rubus odorata) planted in April of 2017 appear to be very happy, an by fall of 2019 blend into the landscape as if they had always been there. (Note the bridge over the daylighted stream in the background.)

Other species that are doing well include the Flowering Raspberry, which we planted on a sloping bank near the stream, in an area with dappled sunlight: exactly the kind of habitat this species prefers in the wild. And, while some of the Marsh Marigolds we planted are no longer there (probably due to being dislodged during high flow events), others are holding on and appear to be happy in their new home.

Some plants that did not do well include woody species planted in the sunny meadows, at some distance from the former pond and daylighted brook. This is an area where vegetation is controlled by the Town’s maintenance crew, primarily by seasonal mowing, and it is possible that some of the planted plants in this area (including two of the three Shagbark Hickory trees) were inadvertently cut down. 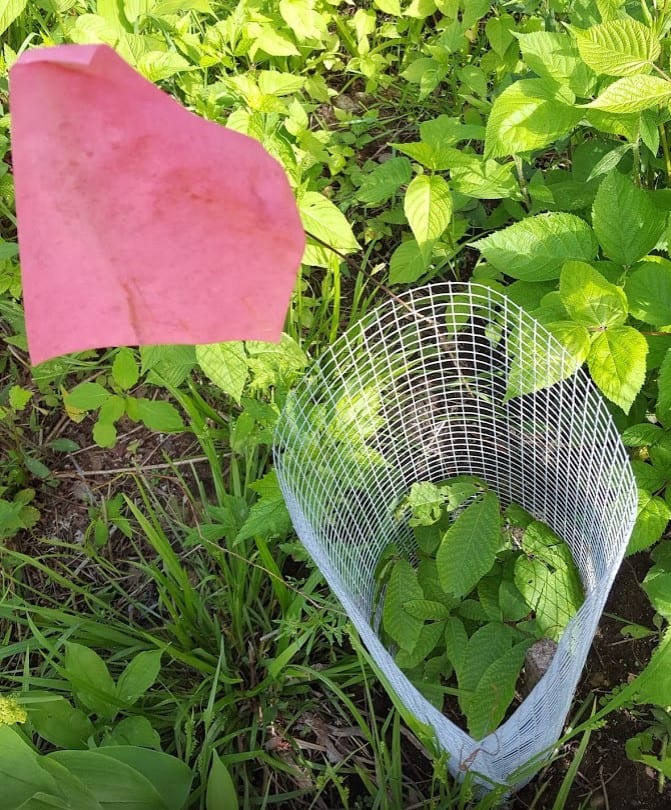 A Shagbark Hickory (Carya ovata) seedling from my nursery was planted in a seasonally-mowed area as part of the edible native plantings at Willard’s Woods. A hardware cloth cage surrounds the plant to deter herbivory and a flag alerts the Town’s property maintenance crew to the plant’s presence and should deter inadvertent damage from seasonal mowing.

Other species we planted, like the Milkweed and Swamp/Shining Rose, have died out, but I suspect a problem with the quality of the nursery stock. Fortunately, there are robust wild (not planted) populations of Milkweed growing elsewhere at Willard’s Woods. The Wild Strawberry we planted did not thrive, but that is due to their planting location outside of the frequently-mowed area. The diminutive plants got shaded out by taller-growing meadow species.

One additional possible contributing factor to some of our planted plants not thriving is the presence (in this part of Willard’s Woods) of a large number of mature Black Walnut trees, which release an allelopathic chemical called Juglone that inhibits the growth of some plant species. Fortunately, though, the list of species that can tolerate growing under or near Black Walnuts is long and includes species in the Prunus (Cherry, Plum), Rubus (Blackberry, Raspberry) Viola (Violets) and Lactuca (Lettuce) genera, both native and domesticated.

An ongoing challenge at this site is the continuing presence of invasive species inside the daylighting project area. The most prevalent and problematic species are Asiatic Bittersweet and Multiflora Rose. It would be good if these and other invasive plants could be knocked back on a periodic (at least yearly) basis to prevent encroachment on and degradation of the habitat we intended to improve with the native plantings. 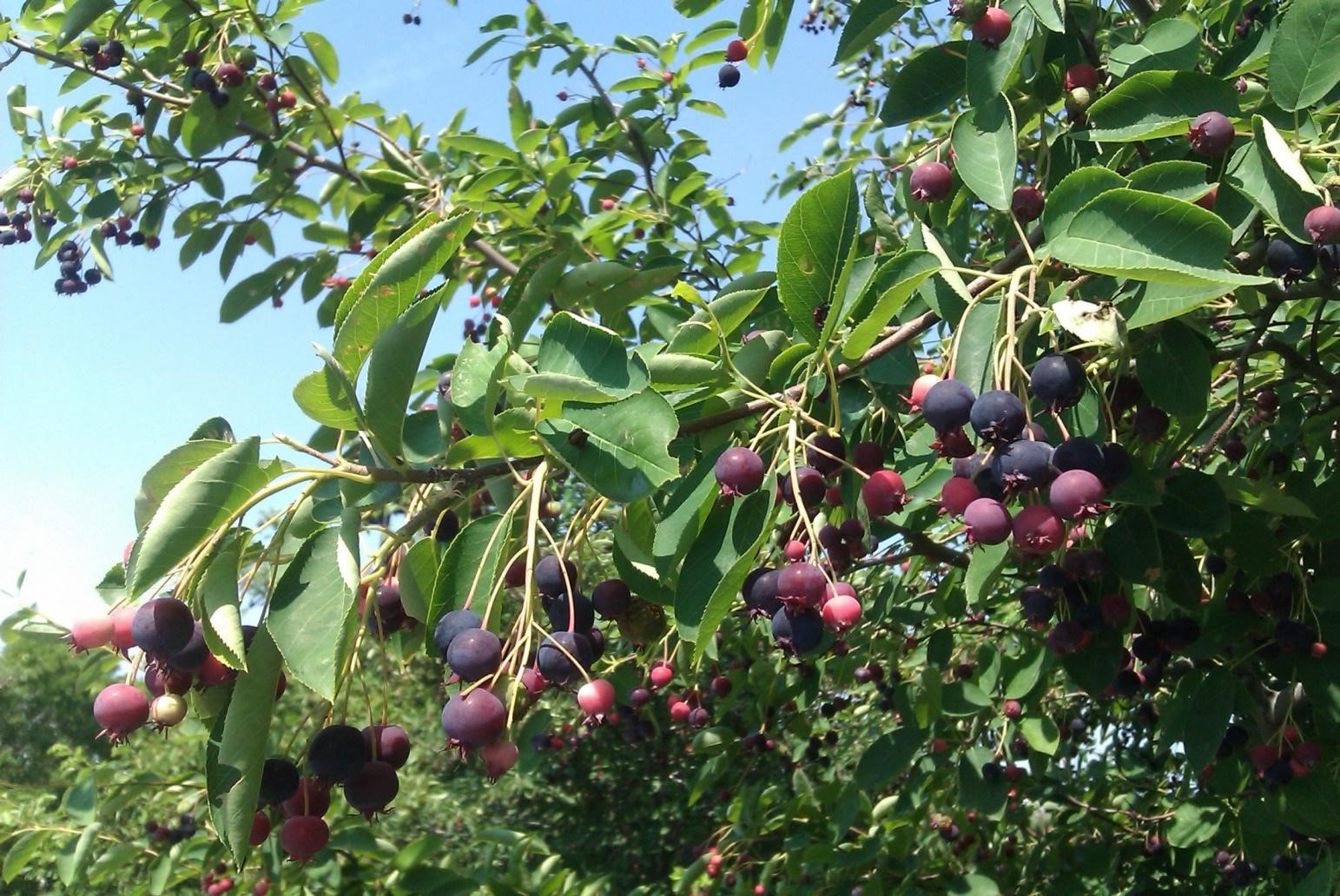 Juneberry or Shadbush (Amelanchier spp.) is one of many edible native plants introduced into the daylighting project area at Willard’s Woods.

You can view more photos of this project and the native plants that were planted as part of it at this online Google Photo album.

Russ Cohen served as Rivers Advocate for the Massachusetts Department of Fish and Game’s Division of Ecological Restoration until his retirement in June of 2015. Since then he has pursued his passion for connecting with nature via his taste buds and teaching others to do the same. Russ conducts dozens of wild edible walks every year, presents throughout the Northeast, and propagates edibles native to Northeast ecoregions. He is partnering with land trusts, municipalities, state and federal agencies, schools and colleges, tribal groups, and others to introduce his nursery plants to their properties. The author of many articles and the foraging book Wild Plants I have Known… and Eaten (published in 2004 and now in its seventh printing), you can find more about Russ’s activities on his website.

Edible Plantings in the Built Landscape
Designing Gardens Accessible to All