By Maureen Sundberg on April 14, 2022 in Gleanings, Resources 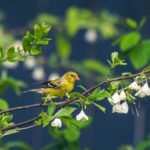 Last year, the Massachusetts Department of Agricultural Resources detected populations of the invasive pest known as spotted lanternfly (Lycorma delicatula) in multiple locations throughout the state. Since this is the time of year when nurseries are receiving stock shipments for the spring planting season, we are sending this notice to remind growers and landscapers to inspect any plant material coming from states where SLF has been found. Read more at Mass Department of Agricultural Resources.

Who can become an X Kid? Anyone! The program was created for kids from 3rd to 5th grade, but all are welcome to participate. This program stars invertebrates and can be completed by individuals or used in a group setting such as a classroom, camp, or afterschool program. Read more at ​​Xerces Society.

How to Tell Apart Sound-Alike Warblers

Bird song provides one of the greatest pleasures of spring. Using these songs to track down your favorite species requires knowing the singer. Some species can sound very similar to their cousins. Let’s consider a few of these confusing songs – and their spectrograms – in preparation for our upcoming migrant arrivals. Read more at National Audubon.

The fast-spreading bird flu is now threatening the livelihood of New England farmers. In the two months since the first outbreak of highly pathogenic avian influenza was reported in Indiana, farmers across the country have killed nearly 23 million chickens and turkeys to limit its spread. With recent outbreaks of viruses in New England, farmers in the region take precautions to prevent their flocks from meeting the same fate. Read more at WGBH and ABC / WKBW.

Does the Ecosystem Hinge on a Single Keystone Gene

In the 1960s, a scientist revolutionized ecology with the idea of keystone species. Now scientists say they have found a keystone gene. The findings demonstrate the importance of combining genetic and ecological tools to understand how changes might influence ecosystems. Read more at Anthropocene Magazine.

Now for Something Completely Different

Octopuses are nothing if not resourceful, whether they’re mimicking venomous creatures or shooting jets of water at aquarium light switches to turn them off. An analysis of underwater images suggests octopuses are increasingly using discarded bottles, cans, and other human rubbish as shelter or as a sanctuary for their eggs. Read more at Yale Environment 360.

About 30% of New England’s native bees build nests above ground. Besides bee hotels (many of which have their own issues), a great way to support these above-ground nesting bees is to leave dead plant stems standing in gardens. Gardeners often ask Tufts Pollinator members, “when is the best time to cut down stems?” The answer is after at least two years (ideally never), which is longer than you might think. Read more at Tufts Pollinators Initiative.

Why Gravel Gardens Are Better Than They Sound

Trees in cities provide health, employment, and climate resiliency benefits that everyone should have. They help fulfill our basic needs, such as breathing fresh air and drinking clean water. But a map of tree cover in America’s cities is too often a map of income and race. Due to decades of redlining and other discriminatory policies, trees are often sparse in neighborhoods with more low-income families and people of color. Read more at American Forest. Find your town’s Tree Equity Score.

Hush, Hush, Listen to the Soil

Life in the soil was thought to be silent. A handful of scientists have started to train their ears to the worms, grubs, and roots underground. They were not prepared for what they heard. Read more at Knowable Magazine.

Environmental challenges are the defining crisis of our age. Addressing them, according to Thomas Christopher, begins at home, literally in our own backyard. In his Growing Greener podcast, Christopher shares interviews with gardening experts who are also leaders working and living in harmony with nature. Listen to the Podcast at Thomas Christopher Gardens.