For the second year running, The Massachusetts Horticultural Society’s exhibit at the Boston Flower & Garden Show received the Ecological Landscape Alliance Environmental Vision Award. This year’s exhibit, “An Enchanted New England Woodland Walk” featured the border where planned landscape meets woods from a child’s perspective. One goal of the exhibit, according to John Forti, the organization’s Director of Horticulture and Education, was to encourage people, both young and old, to “find magic in the landscape” and to go out and explore their own yards. 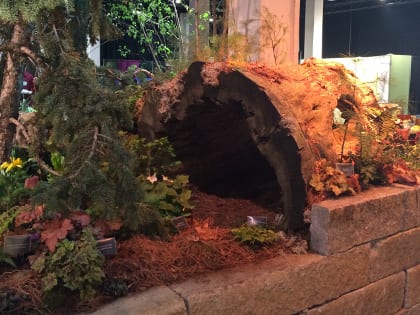 The exhibit included a large hollow log, enticing garden gate, pint-sized chairs and table set for tea, and an array of visually appealing plant material that all worked together to draw a visitor into the landscape on both sides of the garden gate. But, according to Tricia Diggins, one of three ELA judges, “the wonderful complexity of the exhibit demonstrated how a child-friendly landscape goes much further than just not using chemicals on the lawn.” 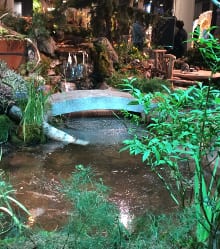 Tricia along with Mark Richardson and Theresa Sprague, all members of ELA’s Board of Directors, judged the exhibits against a list of criteria that included conservation of resources, use of recycled materials, and a design guided by knowledge of and respect for natural ecosystems. According to Mark, an ecological highlight of An Enchanted New England Woodland Walk “was the abundant use of native plants, many of which were sited with other plants as you would normally see them in natural plant communities.” He also noted the use of natural materials, like pine needle mulch, and the emphasis on habitat, including a vernal pool.

Theresa noted that “while the majority of the plant material was native, the exhibit also included a mix of non-native species that were appropriate to the ‘site conditions,’ particularly in areas where there would be more human activity such as by the seating area.” Though the exhibit incorporated many native plants, some carefully chosen non-native “traditional” plants, such as primrose, hellebores, and a variety of heather, she felt added “some human-habitat, creating a nice balance with the wildlife habitat and illustrating that the two are not mutually exclusive.” 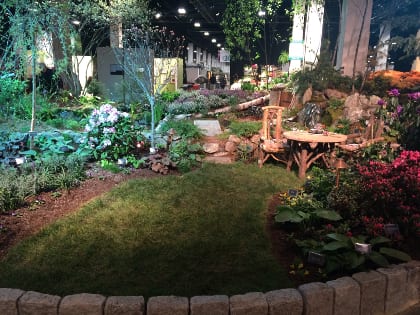 The winner of the ELA Environmental Vision Award receives a $150 donation to the environmental non-profit of his choice.