Rainwater harvesting is a simple term that refers to the use of some means or device of collecting rainwater to store it for later use and distribution. Why do it? When was the last year you did not see signs banning or limiting irrigation, or otherwise indicating an overall water shortage? As our population continues to grow and our lot sizes decrease along with green space in general, the problem is only going to get worse. 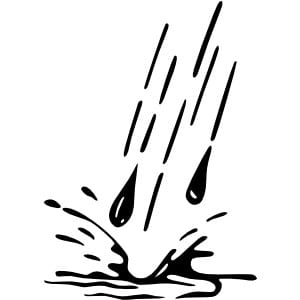 Why get left in the dust? Rather than fight with other industries over water, green industries can produce their own source.

What could be more “green” than reducing the negative impact that the massive, sprawling impermeable surfaces we call homes create for our local environment? If not reduced or contained, stormwater runoff from impermeable surfaces becomes contaminated by design, and ends up in streams and ponds, ultimately having a negative effect on the quality of our local aquifers. Any or all of the following reasons provide justification for rainwater harvesting:

Rainwater systems can be as simple as a rain barrel or as complex as water storage silos with electronic metering and UV sterilization to meet drinking water standards. Items used in the systems can be classified under the following categories:

The first four are vital while the other three are optional in most scenarios.

Collection areas may not need a lot of explanation, but let me list some of the most common. The most popular in the northeast seems to be the roof. However, a patio or driveway may serve as alternate sources. These three are all ideal collection surfaces as it is possible to harvest close to 100% of rainfall from these areas. They also provide water that is relatively particulate-free or able to have the solids removed readily. You can also use less than ideal sources such as a sloping lawn area, which may be beneficial as it would allow for the recapturing of excess nutrients otherwise lost.

Pre-filtration is important as without it, the water one collects may be un-pumpable. Pre-filtration is done in two stages. The first is a visual inspection of the collection surface to make sure it is free from contaminants and organic and inorganic debris. The second is some form of mechanical pre-filtration. This can vary in complexity from a simple basin with a grate and mesh over the top to more complex, purpose-driven units like vortex filters designed for “no maintenance” systems.

Storage can range greatly in size and cost. Basic systems may be no more than an above ground cistern or a submerged tank. 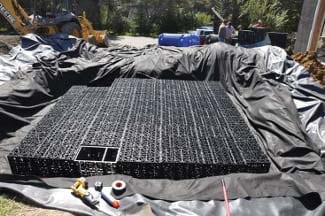 Most systems installed in the northeast are installed using EcoBlox or similar products (the same product is available from numerous manufacturers and distributors under many different names). Basically, these products are like collapsible milk crates. They reduce shipping costs associated with pre-built containers. One important calculation to keep in mind is that one cubic foot of water contains 7.48 gallons.

Pumping and moving can be accomplished very easily in some applications. In some cases movement of the water can be gravity-fed. For obvious reasons, this is often the most inexpensive method, though it is limited to a small percentage of systems. This may be best suited for soaker hose applications, depending on the distance and grade change from the tank to the area to be irrigated. 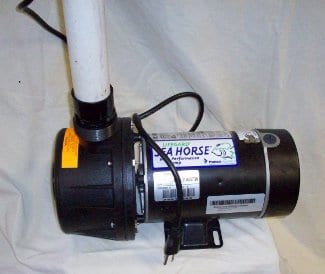 The more common method of moving water is with a pump. The easiest method is to have a GFI (Ground Fault Interrupt) outlet close to the storage area or reservoir, and to use a sump pump or common garden pump plugged in when necessary (manual control). Simply determine the gallons per minute or per hour (gpm/gph) desired, as well as the typical head pressure.

A more advanced method of moving water is an “on demand system,” utilizing electronic controls. Electronically controlled systems are user friendly; the only downfall is the increased cost of the system. The pump stays plugged in continuously to a controller that turns the pump on when it senses a drop in pressure. Some of these units are separate while others are physically part of the pump (most common on inline pumps). 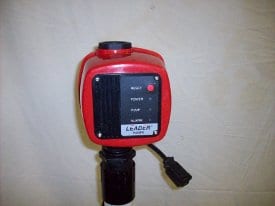 Backing up and integrating the rainwater harvesting system as the main source of water for irrigation is often the goal. In this set-up, the site’s primary water source is used only as backup for irrigation. The least expensive method and easiest to install is a cistern backup, with a simple float valve mounted at a preset level in the tank, or at the lowest allowable water level. This application would require that irrigation water be drawn from the cistern permanently. The biggest downfall in this application is that most of the float valves on the market today, although inexpensive, have a relatively short life expectancy and thus, are prone to failure. If using this method, stick to a higher quality float valve and replace it every 2-4 years.

A slightly more complicated system is a direct back-up. In most applications, a three-way valve is mounted between the irrigation and the feed. The three-way valve is usually set to open on the rainwater set up. A constant-contact probe is connected to the three-way valve. When water is no longer touching the probe, it switches the valve to open between the main feed and the irrigation, thus closing off the rainwater set up until there is more water in the tank to bring it up and beyond the level of the probe. Backflow preventers are a legal necessity to assure there is no cross-contamination.

Measurement and control, as with everything else, has varied costs and features. The primary aspects of control were addressed under pumping, as the two are often tied together. The simplest and least expensive approach to measurement is called the “look and see” method – “traditional” as opposed to “high-tech.” This involves walking to the tank and examining it, even removing the cover. An equally easy approach is the dipstick method. Pre-calculate the holding capacity based on depth, and calibrate a rod or stick to that depth, so you can see what you have left. This is best for buried tanks which cannot be checked by simply “looking and seeing.”

From there, things get a little more complicated and pricier. A mechanical water level indicator is similar to the device mounted on your oil tank. It will indicate in increments the height of the water in the tank. For this method, you will need to determine the volume of the tank in relation to a fraction. An example would be a perfect cube tank with a volume of 200 gallons. Knowing the volume we know that when at 25% capacity we have 50 gallons. This can be particularly interesting (not by any means impossible) if your tank is a horizontal cylinder where 1/8 of the tank height is not 1/8 of the tanks capacity.

A digital indicator does approximately the same thing, but often can transmit the signal from the tank to the house or to an internet connection so you can monitor capacity from far away, if you really needed to.

The crème de la crème is the wireless ultrasonic unit. This can be simply an indicator or in many cases, are complete control units. These can be programmed to display the volume in gallons, not just the height of the water. Wireless control units can be very feature-loaded and often contain more than the average residential system requires. However, they are super cool and if they could remember my mother-in-laws birthday, I would have one on my system!

Treatment (i.e. to drinking water standards) is not a very popular option here in the northeast due to our readily available potable water sources. This topic alone is often the subject of entire books rather than chapters. This also gets further outside of the realm of the landscape contractor’s installation (and deep into the legal and bureaucratic quagmire.)

As to the economic viability of rainwater harvesting systems, here is a simple breakdown of costs:

Currently, the BWSC (Boston Water and Sewer Commission) charges up to 1.5 cents per gallon for combined water and sewer charges.

Materials for a basic 1000 gallon system cost approximately $1.50 per gallon (wholesale cost). At those costs, simply using this volume 100 times would lead to a break-even point in consumption costs vs. materials costs. The larger the system, the lower the per-gallon cost to store it. Larger systems usually go in to sites with higher water demands, thus a much faster return on the investment. At today’s BWSC rates it may not be a rapid money-saver for the average household, but water rates will rise. The real savings occur when you’re able to keep your landscape healthy during a time of drought.

There are many benefits to rainwater harvesting for both the homeowner and the contractor. Oftentimes, a rainwater system is installed because some remedial action has to be taken on pre-existing drainage issues such as inadequate or failed drainage plans or due to grade changes in abutting properties. The ability to incorporate a system as insurance against drought can often be the determining factor in selling that expensive landscape. In other cases, it is simply something the homeowner or contractor feels they need to do to reduce impact on the environment. Weighing the reduction of actual costs of water along with the secondary benefits makes it an easy sell.

Understanding the components and specifying the products are two very different things. In order to have the system specified properly, you will need to have:

1) A rough sketch of the house, including all downspouts. Square footage of the house is vital to determine production levels.

5) General topographical sketch to indicate grade changes around the site.

As you can see, the practice of harvesting water can be as complex or as simple as one wants it to be.

Many of the more complex features mentioned were initially developed for commercial collection and monitoring. However, we see an ever increasing number of features being installed into typical residential installations. At first it may seem complicated, but I hope by this point you have a basic understanding of the four vital aspects of rainwater harvesting: collection area; pre-filtration; storage; and pumping/movement. Our water resources are limited but population and demand will continue to increase. Demand for rainwater harvesting systems will increase rapidly, becoming a vital part of most landscapes.

Joe Sokol holds a BS in Horticulture from University of Connecticut and has been engaged with Fourth Generation Nursery, now the largest wholesaler of aquatic plants in New England, since the age of eight. He can be reached by phone at 508-634-1914.

Eco-Machines for Water Treatment
What is a rain garden?