By ecopro on April 14, 2013 in Stormwater Management, Sustainability

I have always been a map gazer, letting my mind wander along the mountain ridges and rivers of the world. Recently, I have taken up a study on the history of cartography, how each map reflects a worldview, a “cosmology” of the planet. The connection between human habitation, expansion, and commerce to the winds and the global currents is now largely forgotten, our ability to travel is so unfettered, but in essence global currents are how the Europeans navigated past the Cape of Good Hope and the secrets of the Arabian Sea were revealed, leading to commerce and to the next sea, and the next. 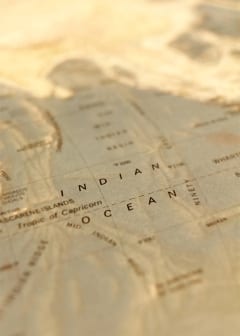 Further back still is the shift from nomadic tribes to sedentary societies. The Natufians, an early sedentary society, are credited with the cultivation of wild grasses in the Levant (the eastern Mediterranean littoral edge) as early as 12,000 BC. The shift to living and cultivating one area year round, changed the relationship between man, animal, plant, shelter and water. Once man domesticated animals and developed agriculture, the next step was moving from dryland farming (rain-fed crops) to irrigated crops, harnessing water resources.

A Developing Relationship with Water

The availability of potable water, water fit for irrigation and sanitation, became a determining factor in where cities would grow, the routes of overland trade passages, and, ultimately, the size of settlements. Shahs, emperors, military generals, railroad tycoons and the like, have all understood, whoever controlled the water supply, controlled the people. The central role of water in world history is complex, but two vital functions are easily identified, sustaining life and sanitation. The World Bank suggests that food production and water management is a global issue of rapidly increasing importance. Looking through a historical lens, one can readily see how infrastructure of a society, especially as it pertains to water, reflects the cultural values of that society.

Taking a great step forward, to the modern day, it is almost baffling to consider that despite our early, and in fact present-day dependency on access to untainted water, that water has become an invisible commodity, something taken for granted, something available on demand without economy. And in great storm water swells, water is something that poses a problem, a destructive force that needs to be contained, restrained, and defended against. Nonetheless, there is a “water consciousness” or awakening afoot. There are two wonderful examples, one from ancient Egypt, 1800 BC, and the second from 21st century Holland. These two projects bear a strong resemblance to one another. Both demonstrate a shift from the “water problem” mentality to the “water advantage” mentality, working with seasonal swells and storm surges to the advantage of human habitation. 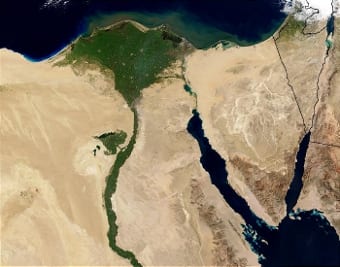 Egyptian Pharaoh Amenemhet III used the flooding of the Nile to inundate low lying agricultural fields. Basin irrigation, the same detention method used by many rice farmers today, linked numerous fields so that the flood waters could be diverted to the desired field. The rich sediments carried in the river’s water fertilized the fields at the same time they were being irrigated by the water. Amenemhet III stored water in a Lake Faiyum for use during dry periods when the water was released to fields connected by immense waterworks. As a result of this organized flooding of fields, the land was highly productive and became the breadbasket of the civilized world. The flooding water was used to create an amenity and to the Egyptians’ advantage. 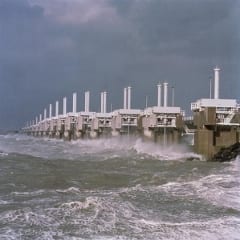 Holland, or Netherlands (Dutch for “Low Lands”), is a small, remarkable country. The majority of its population lives on land that is below sea level, including the people of Amsterdam and Rotterdam. The country has a long history of land reclamation. They have wrestled terra firma from the sea, in a manner not unlike the filling of the Back Bay in Boston. However, in the wake of a devastating flood in 1953 in which 1,836 people, in Holland alone, were killed overnight due to flood inundation, the Dutch created an impressive sea defense project, collectively called the Delta Works. The Works consist of 13 dam and storm surge barriers, including the Oosterscheldekering, one of the world’s most expensive dams. The Oosterscheldekering completed in 1986, took ten years to build.

In the constant dance between the sea, the subsiding land, the rising sea levels, and ongoing maintenance, the Dutch Committee for Durable Coast Development recognized that the country must continually increase safety norms and performance standards. Thus they realized an entirely new approach was called for, and they determined that the southwest river delta area should be used as a water retention area. The result was “Room for the River” an international initiative, begun in 2006, that allows for the periodic flooding of the Rhine Delta. 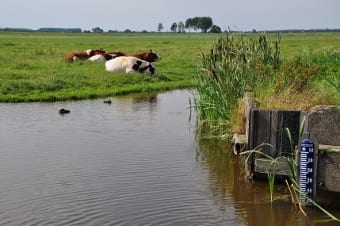 A scale measures the water level in a polder near Zoetermeer, Netherlands, at near 5.53 meters below seas level. Credit: Vincent vanZeijst.

The plan crosses country boundaries and includes four rivers, the Rhine, the Meuse, the Ijssel, and the Waal, that transverse Holland, Germany, France, and portions of Switzerland. Slated for completion in 2015, residents are in the process of being relocated away from these low lands to higher ground, and the low areas are being prepared for periodic inundation, appropriate for agricultural crops, wildlife refuges, and recreation. Not only are the Dutch removing obstacles that kept the water out, such as polders, dams and bridges, they have effectively shifted the focus from sequestration to planned flooding, literally letting the river in.

In contrast, modern cities are full of overhead wires and underground pipes, an infrastructure that is rapidly becoming antiquated. Future cities will look different than they do today. As water consciousness and storm water quality gain seats at the collective bargaining table, land-use planning will change globally, and by so doing, will change our cities and our coasts. Programs such as “Let the River In” are porous models for human habitation and stormwater management.

Heather Heimarck, ASLA, MLA, is Director of The Landscape Institute at the Boston Architectural College. Her professional work spans from large scale urban planning projects such as the Lower Charles River Basin to campus and institutional work such as the award winning Honan Allston Public Library, streetscapes, bike lanes, and residential design. Ms. Heimarck received a MLA from the Graduate School of Design at Harvard University.

Heather Heimarck and Lisa Cowan, ASLA, Landscape Architect with Studioverde, will contribute article to an occasional series that examines water from a variety of perspectives and aesthetics while referring to different regulatory, technological, and design approaches.