By ecopro on April 13, 2012 in Rain Gardens, Rainwater Harvesting

This article first appeared in the Summer 2005 issue of the Ecological Landscaper; Paul has provided an update for 2012.

In this age of reckless consumption of resources and pollution without shame, conservation is vital. The numbers of individuals and businesses that embrace conservation are growing, but America is still lagging in shifting to cleaner, more efficient enterprises, such as hybrid automobiles, wind power, and green roofs. Individuals must take it upon themselves to implement conservation strategies in their neighborhoods, communities, and places of work.

At Mount Auburn Cemetery, America’s first garden cemetery, conversations, meetings, and debates have moved us toward the future as an environmentally progressive institution. We are conscious of the danger of fertilizers entering our water and we observe strict buffer zones. We have replaced artificial fertilizer with organic. Our flowerbeds use compost to increase the water-holding capacity of the soil and to replace nutrients. Less water is needed for drought-tolerant perennials than for what had been beds solely of annuals.

We preserve native plants and eradicate invasives. We have replaced unnecessary gas-powered vehicles with an electric fleet. Habitat restoration projects for plants and wildlife incorporate natural remedies, such as reduction of algae using bales of barley straw in the ponds. [See Barley Straw for Clear Ponds, TEL, Spring 2005.] Natural solutions cause less environmental stress and cost less than chemical solutions.

Can Mount Auburn do more? Of course. Conservation opportunities are available to those willing to make the effort. Perhaps one day the remaining gasoline-powered vehicles will be replaced and green roofs will top the buildings. Right now we are working on water conservation.

Water consumption affects every person and business in every community. Mount Auburn’s large aquifer has met the cemetery’s needs for generations, but today the aged pipelines are frequently shut down to repair leaks and water pressure is inadequate in parts of the property. To conserve water, some areas are not irrigated at all, although others are still high-priority for irrigation. Mount Auburn currently has a consumption permit allocated by the Charles River Watershed. A consumption permit allows an entity to draw a specific amount of water from the aquifer. Daily limits are reduced and/or restricted during periods of drought. We have also replaced high-volume overhead sprinklers with low-emitter models. 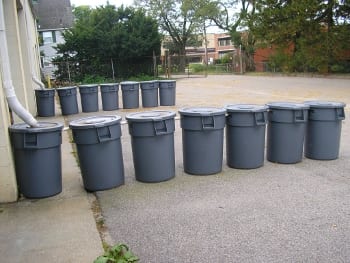 In March of 2004, I was allotted $400 to set up a rainwater harvesting system at the greenhouse. A larger water storage system was to be considered, if I could demonstrate success. My idea was a basic one: connect rain barrels to the gutter system of the head house garage and office space at the greenhouse. So, I purchased eight 44-gallon, heavy-duty trash barrels, 10 feet of one-inch polyvinyl chloride (PVC) pipes and elbows, mosquito netting, metal screws, caulking, a one-inch circular drill bit, and a quarter-horsepower sump pump. To prevent unwanted substances from entering the barrels from the roof, I set up a device to divert the first flush of rainwater.

I fastened an empty quart oil bottle (triple rinsed and bleached) inside each gutter elbow with metal screws and sealed them with caulking; the bottom of each bottle was cut and bent up into a flap. PVC piping fit snuggly into the opening of the bottle and was secured with screws. The pipe led from the bottle into a hole drilled in the lid of a rain barrel. The idea was that the first flow of storm water would run out the bottom of the drainpipe, but as the water pressure strengthened, it would overpower the flap and run through the PVC pipe and into the barrel. Finally, I connected overflow rain barrels with pipe. Netting covered the end of the last overflow pipe to deny mosquitoes access to the water for breeding. When all the rain barrels were filled, the water would release to the ground. 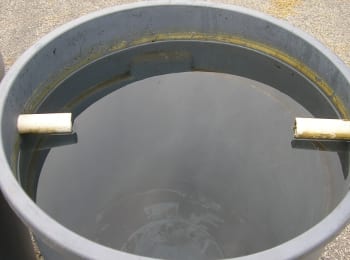 Captured water flows from barrel to barrel through PVC piping.

The system worked. Water from the barrels was transferred to 100-gallon tanks carried by turf vehicles and used to irrigate the annuals. Rainwater was also mixed with horticultural oil in a 500-gallon tank for use by the arborists.

It was soon obvious that more water storage was needed. I scrambled to salvage two 100-gallon tanks and two GEM electric car trunks. That was still not enough. I began soliciting donations, contacting juice and sauce manufacturers and distributors and all the local recycling companies. In July, User Friendly Recycling of West Bridgewater, MA, donated nine 55-gallon barrels. All had been triple rinsed, but I bleached them as a precaution.

In September, I heard on NPR that Wal-Mart Foundation was making donations to community projects. In response to my inquiry, Wal-Mart in Methuen, Massachusetts, sent $75, with which I purchased a drill, drill bits, hacksaw, blades, hose, and extension cord. Home Depot in Watertown supplied seven heavy duty barrels and ten feet of PVC pipe, almost $300 worth of materials. Six 55-gallon barrels for $10 each came from a salvage company.

Water storage capacity is now nearly 2,000 gallons. In 2004, the rainwater harvesting system collected 7,118 gallons of water, which helped maintain the many beds of annuals on family lots and garden beds. My goal for 2005 is to water all the gardens that I care for with collected rainwater.

In the spring of 2005, after disconnecting and storing the system for the winter, I increased the water flow through the gutters by connecting the downspouts directly to the barrels. Instead of using quart bottles with diverter flaps, I replaced the gutter elbows and fashioned a flap, attached with stainless steel ties. I drilled release holes and connected another gutter elbow to channel the water directly to the rain barrels. In a rain, the barrels now fill extremely quickly and less water is lost.

By May 24 of this year (2005), nearly 3,800 gallons of rainwater had been collected. Collecting rainwater has been a simple and successful conservation effort at Mt. Auburn.

I eventually acquired fifty, 55-gallon barrels from Bancroft Barrel in Somerville, MA. I attached a gutter to a greenhouse and connected the barrels to the gutter. This increased collection capacity to more than 3,000 gallons. Since 2004, we have collected 85,000 gallons of rainwater at Mount Auburn. We also have incorporated many drought tolerant perennials into our gardens, often replacing more demanding annuals. This coming summer, Mount Auburn will be taking down its forty-year-old greenhouses and replacing them with a modern and more environmentally sustainable structure. A 30,000 gallon underground cistern will replace the rain barrels in our conservation effort.

Gutters from the greenhouse roof direct water into a system of interconnected barrels..

Paul Kwiatkowski attended Evergreen State College in Olympia, WA, majoring in Ecology. He accepted an internship at Mount Auburn in 1999, followed by the position of Conservationist. He works on many sustainable restoration and habitat improvement projects. Paul may be reached at pkwiatkowski@mountauburn.org.