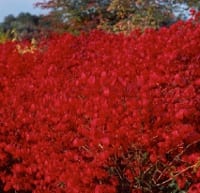 General Description: Winged euonymus is originally from northeastern Asia including most of the provinces of China (Zheng et al, 2006). It was introduced into the United States during the 1860s and was quickly recognized as being a desirable horticultural specimen exhibiting an attractive growth habit, corky-winged stems, autumn leaves of brilliant red color, and attractive fruits (Dirr, 1998; Ebinger, 1996).

Leaves are opposite to sub-opposite, one to three inches long, more narrow at the base than the mid to tip region (obovate); leaf tip is acute (pointed); leaves are generally ½ inch wide and finely serrate (Dirr, 1998). Buds are conical, strongly divergent, and are green-brown-red in color (Dirr, 1998). 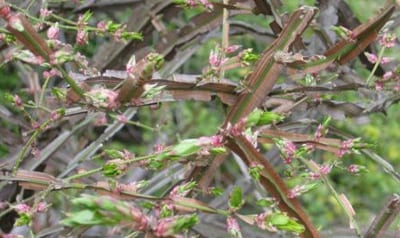 A photo taken on 4/12/12 shows emerging leaves and corky wings of the winged euonymus.

Growth rate of stems and branches is considered fast in the spring but negligible the rest of the growing season. Dirr (1998) recommends a spring fertilization to maximize the spring growth spurt.

I have noticed long time established plants at a local park in Newton, MA, growing not particularly high and/or wide as other exotic invasive species such as glossy and common buckthorn. In fact, I have observed that where all three of these invasive species grew together, the younger glossy buckthorn towered over the winged euonymus.

If you notice winged euonymus growing in your local woodlands, it may not be a new arrival if you happen to judge its age by its size. Its slow growth and small size (when compared to other woody exotic invasive shrubs of the same age) may fool you into believing it is a young plant or recent arrival. The buckthorns tend to grow bigger during the growing season than winged euonymus.

The slower growth rate exhibited by winged euonymus may indicate the diversion of its energy into more root production than top growth. Older shrubs in gardens tend to have extensive root systems.

Dirr (1998) describes winged euonymus as having a highly desirable landscape value. He states that this ornamental shrub is “still one of the finest landscape plants for American gardens and new selections add some diversity to the typical form” (Dirr, 1998, p.355). Professor Dirr (1998) also acknowledges that this species is weedy and has escaped cultivation. Therefore, you need to be aware of this plant!

Winged euonymus has been widely cultivated here, in New England and elsewhere, for its horticultural characteristics, attractiveness to wildlife, and its adaptability to the urban/suburban environment. It grows in a wide range of exposures from full sun to full shade shade; tolerates a broad range of soil types and soil pH; and responds very well to pruning (Dirr, 1998; Whitcomb, 1985; Somers et al, 2006), which is why you may see this plant used so frequently as a hedge or lone specimen bush in home and commercial landscapes. 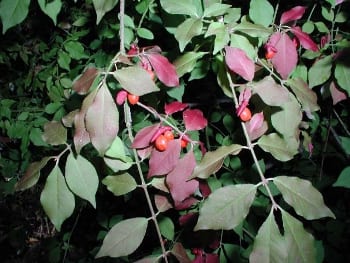 Winged euonymus grows best in moist but well drained sites and tolerates moderately dry conditions (Whitcomb, 1985). In Waltham, MA, I observed newly planted four foot high shrubs in a restaurant parking lot garden. The shrubs served as a screen to block parked cars from an intersection. By the end of the summer these shrubs showed visible signs of drought stress. The following year these shrubs had recovered with the help of summer irrigation provided by the restaurant owner. At that time, older shrubs in my neighborhood with extensive root systems had made it through the droughty summer without exhibiting serious drought stress, such as leaf discoloration and leaf drop. Larger, more established shrubs can withstand most droughty conditions.

(1) High seed production and good seed viability. However, seed viability may not last longer than the current year. Seed bank data is not available (Fryer, 2009).

(2) Vectors. Seed is dispersed by birds and other berry feeding animals, sometimes over great distances.

(3) Sexual reproduction breeding system. Breeding system is a monoecious condition where both male and female reproductive parts are consolidated into the same flower on the same plant (i.e. perfect flowers). Therefore, it only takes one winged euonymus to produce a colony of reproducing plants if left unchecked. 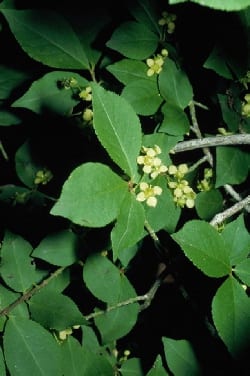 (5) Predator avoidance and/or deterrence. Virtually there are no predators feeding on or killing this plant.

(6) The timing of leaf out and of leaf loss. Leaves emerge a little earlier in the spring than some native plants, and this species holds onto its leaves a little longer in the fall than some native plants. This trait allows winged euonymus to produce more carbohydrate and other compounds in the leaves by way of photosynthesis and transport these products to the roots where they are stored for cold weather, insuring better winter survival and spring growth.

(7) Shade/sun tolerance. Winged euonymus is shade-tolerant. However, it frequently invades sunny spots which is why it is seen growing in open fields, along field edges, along roads and paths, and in other areas that are sunny.

(8) Time of year of fruiting. This species flowers from May through June and fruits (produces purple colored berries containing seed) in July up through October (Zheng et al, 2006; Dirr, 1990; Magee and Ahles, 2007). Winged euonymus is insect pollinated.

1. Cultural Controls: Monitor or visually inspect your property for winged euonymus. Do this at least every June and September. As stated in Part II, IPM Control Strategies for Exotic Invasive Plants, prevention is a cultural control of great value. Do not plant or encourage the planting of this species. Educating others (e.g. clients or neighbors) about the dangers of this pest is another cultural control of enormous value.

2. Mechanical Controls: Pull, dig, and cut. Pull out easy-to-pull plants. If you can’t hand-pull winged euonymus, then you can dig out the plant or pull it out with a Weed Wrench®. Spring or early summer cutting of winged euonymus will slow its growth, but may not inhibit flower, fruit, and seed production. Repeated cutting on a monthly cycle will be more effective at stunting the plant and inhibiting fruit and seed (berry) production. Mechanical controls can be done at any time during the year; however, the best times are the months before or during flowering.

3. Biological Control: There are no insects, mites, or commercially available disease organisms yet found to be effective biological control agents.

4. Chemical Controls: The best time for any control option is just before a plant flowers. In addition, the application of herbicides in July, August, and up to mid-September gives maximum chemical control. These are the months that carbohydrates and other plant compounds are being manufactured in the leaves by way of photosynthesis and transported from the leaves to the roots for storage. This downward flow of plant compounds helps facilitate the transport of foliar and stump applied herbicide to the roots during these months for more effective kill. The mechanical control of cutting or mowing is also very effective during these months for the same reason. For example, when you cut the top off any plant, the roots naturally respond by pushing up more top growth (sprouting), reducing the root reserves (carbohydrates and other growth compounds) stressing the plant. Every time you cut the top off you force the plant to sprout which reduces the root reserves and weakens the plant.

Suggested chemical control during July, August, and up to mid-September is to cut winged euonymus down to one inch from the ground and immediately apply straight glyphosate herbicide to the freshly cut stump using a paint brush or sponge applicator. Roundup ‘poison ivy killer’ works very well. Suggested chemical control in March, April, May, and June is to cut the stump high (six to twelve inches) and let it sprout. Then cut the sprouted plant in July, August, or early September to one inch from the ground and stump-applicate with straight glyphosate herbicide.

1. Properly identify winged euonymus. Educate your neighbors about what you are doing and why.

2. Hand-pull what you physically are able before winged euonymus produces berries (seeds); preferably before July.

3. Use a Weed Wrench® on hard to pull plants; preferably before July.

4. Plants that prove to be too difficult to remove by way of pulling or digging you can cut down to a one inch stump and immediately apply a glyphosate herbicide to the freshly cut stump using a paint brush or sponge applicator. Stump application is very effective during July, August, and up to mid-September.

If you cannot stump-applicate the hard to pull plants during the summer months, then you can instead cut the plant six to twelve inches from the ground before it starts to produce berries (seeds) in July. After the taller stump has re-sprouted, you cut it to one inch above the ground and immediately apply glyphosate herbicide to the freshly cut stump. Allowing the stump to re-sprout during the summer months draws carbohydrate and other growth compounds from the roots and depletes some of the root energy making herbicide kill more effective.

7. The above suggested example may be modified to suit existing site conditions and the level of winged euonymus infestation.

Note: Landscapers and homeowners may be interested in native plant replacements for winged euonymus. They are encouraged to use the following resources:

3. The website of the United States National Arboretum also offers a list of alternatives to replace invasive plants: http://www.usna.usda.gov/Gardens/faqs/InvasivesAlternatives.html.