By Maureen Sundberg on April 8, 2016 in Soil Health

Ralph Waldo Emerson once said, “Nature never hurries….” The same, I might add, holds true for the soil.

Since I can remember, I have always been fascinated by soil. It was an interest that motivated me to study plant and soil science at the University of Massachusetts and later on to pursue a career in the green industry as a horticulturist and arborist. When I write on the topic of soil, I do so neither as a soil scientist, nor as an extension professional but as a seasoned field practitioner, workshop instructor, and observer. Although my green industry resources have provided me with a wealth of soil information over the years, I have found myself seeking and being guided more by the advice of local farmers and foresters regarding their soil philosophy, knowledge, and practices.

In 2009, my understanding of soil took a very interesting turn. I attended the first of several soil workshops held at Cornell University. In the early 2000s, the team at Cornell began taking innovative steps towards establishing an indicator-based, soil health assessment approach to evaluating soil. At the core of their assessment was the term soil health which is defined as a soil’s ability to function. The idea was to design a tool to determine soil function by identifying existing soil constraints through a series of field/lab indicators that covered the biological, chemical and physical attributes of soil. My time at Cornell helped to re-enforce one of my core beliefs, “If you can’t measure it, how will you manage it?” 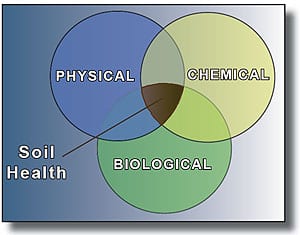 The concept of soil health is gaining rapid acceptance among farmers in various parts of the country, especially among those seeking holistic and sustainable management of soils. Cornell’s Soil Health Assessment was crafted largely with agriculture and the farmer in mind; much like soil testing was developed by land grant colleges and universities. So the question then became: How valuable a tool would the soil health assessment be to the landscape practitioner working in the urban environment?

Turning to the Urban Environment

From the beginning, I immediately noticed a pattern from some of my early soil health assessment field trials. The indicators assessing the soil chemistry functions were almost always at optimal to high levels. I thought this odd especially where I had obtained wide variability among the group of biological and physical indicators. I came to two possible conclusions. First, soil in the urban environment wasn’t nearly as impoverished as I had been led to believe. Second, and the more likely reason, repeated annual fertilizer applications without the benefit of diagnostics had slowly built up in the soil for decades. Although, the soil chemistry indicators achieved high ratings, the soil samples in my early trials received Overall Quality Scores of “Medium” and “Low” because of the poor ratings among the biological and physical indicators. 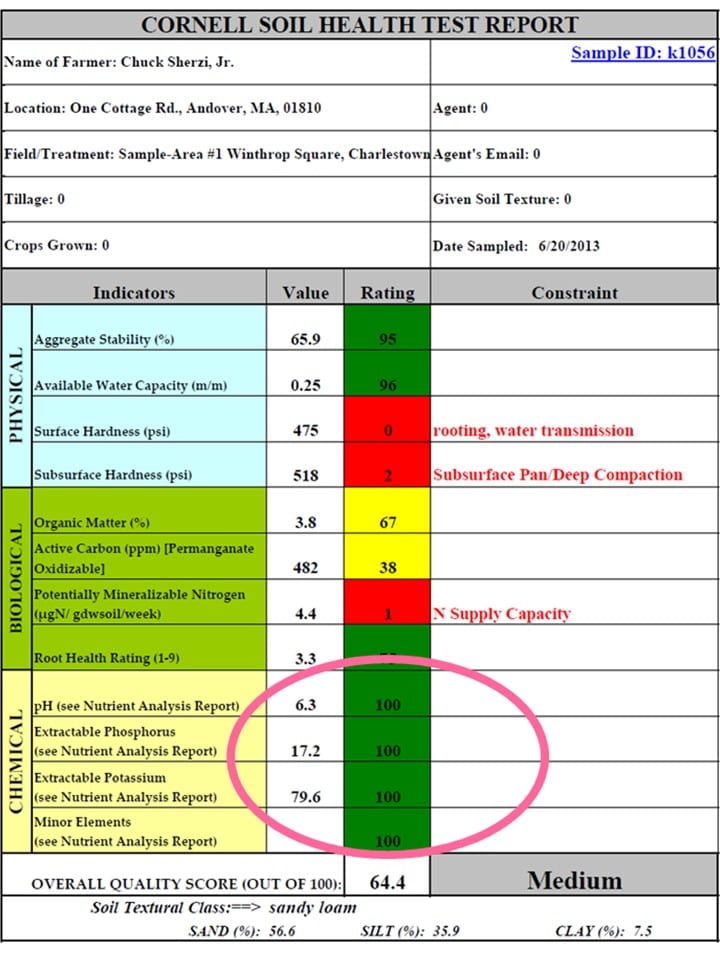 In spite of the high ratings for soil chemistry in early trials, overall ratings were brought down due to biological and physical indicators.

As I became more proficient at using and interpreting the Cornell Soil Health Assessment, I became curious as to how long it would actually take for a soil assessed with numerous constraints to have its function partially or even fully restored. In 2011, I got some of that question answered. In April of that year, I was contacted by Elizabeth Vizza, Director of the Friends of the Public Garden. Her organization was getting ready to commence with a large soil amending project on the Commonwealth Avenue Mall in Boston. She was interested in assessing the soil on the panel from Massachusetts Avenue to Hereford Street, a 25,000 square foot area.

This section of the Mall was in deplorable shape. Police cars and trash trucks often jumped the curb to change direction; tourists, dog walkers and the homeless were frequent visitors. Very little vegetation existed. The ground was horribly compacted. We agreed on the setup of a very simple design of experiments by which I took samples prior to the start of the project, at the four-month mark, and after a full year. The data images (click below to magnify) show the assessment results during each sample period from the right side of the Mall with the initial assessment shown on the left and final on the right. It took a year, but soil function was well on its way towards restoration.

The Commonwealth Avenue project helped me gain a better understanding of soil compaction as it relates to soil structure, and that new understanding shed more light on the soil health restoration timeline at the site. The goal of good soil management practices is not to manage what you see but rather what you don’t see. As odd as it sounds, space is what you are managing. One half of the soil is the solid mineral fraction which is the inherent portion of soil derived from parent material and relative to geologic time and soil forming processes. The other 50% is space – pore space. It is where air and water reside, where gases are exchanged, roots penetrate, and organisms travel. Pore space is the dynamic portion of the soil that can change as a result of soil use and management relative to the human time scale.

Image of well-aggregated soil in juxtaposition to a schematic depicting different levels of soil aggregate formation.

Although my early experiences with the Cornell Soil Health Assessment were initially confined to random field samplings and later to individual projects, I sought a venue where I could use it consistently to evaluate the conditions of a site and to monitor soil function restoration over time. I decide to pursue fine gardening/lawn maintenance as a business with my wife as it provided access to client properties on a regular basis throughout the year. Year-round access was critical as it allowed observation of the various subtle changes and transitions that a landscape undergoes throughout a growing season.

Many of the properties under our care were initially drowning in a number of inputs, including too much fertilizer, mulch, and water. We began to see immediate improvement based solely on adjustments targeting proper pruning time, mowing height, mulch use, and frequency of irrigation. Each property visit yielded new lessons learned and helped us to build a decision-making matrix for best management practices. From the start, our philosophy has been to focus on the particular needs of a landscape rather than implement input-heavy programs.

Having a consistent client base has also allowed us to experiment with new ideas and techniques. One area that we have begun to seriously look at is the use of cover crops to help alleviate specific soil constraints. It is essentially a no-till approach to landscaping that uses cover crops much the way a farmer would to help alleviate problems such as field compaction, crusting, erosion, run-off, weed pressure, moisture retention, and organic matter loss. We have successfully used some of these ideas to reclaim old vegetable gardens and flower beds, but also to renovate small areas of lawn.

One area that we have been researching in order to implement the cover crop technique further is real estate development and new residential house construction. Building sites give soils absolutely no respect. I was curious to evaluate how fast soil begins to degrade from the time that a lot is first cleared. I used a very simple technique called a slake test to illustrate the degradation.

Trees were cleared from this lot and the top layer of soil scraped off and stored on the site (right of the new structure).

The samples shown below in glass tubes were taken five weeks after the lot shown above was cleared. The tube on the left in both photos contains soil sampled from the woods that once occupied the entire site. The tube on the right contains soil sampled from scraped up topsoil piles left on site. The clods were air dried prior to being submerged in water. The clod in the tube on the left remained intact except for a few flakes. The clod in the tube on the right imploded in 10 seconds. The soil health function achieved over decades of a forest duff management layer and capable of supporting a community of large trees was gone in five weeks! We were even more surprised  by the results of similar slake tests we performed on the dark, rich loam that was brought to the site during the landscape phase of construction. When we tested this dark, rich loam – the gold standard in the industry – the clods disintegrated in three seconds.

A simple slake test reveals the degradation of soil from a site being developed for residential housing.  After seconds, the soil in the tube on the right, sampled from topsoil scraped up and left on the site, imploded while the soil on the left, sampled from surrounding woods, remains intact.

Celebrating and Legislating for Soil

Last year was the kick off to a series of events for all who hold soil in high esteem. The United Nations General Assembly declared 2015 to be the International Year of Soils. For the first time, soil was receiving the recognition that it has long been due. As the worldwide celebration got underway, I was reminded of another soil event that was “celebrated” eighty years ago. Actually, it was a series of events collectively known as the Dust Bowl. A devastating mixture of intensive land cultivation with no soil management practices and a stock market crash with tumbling commodity prices was followed by wind and drought and misery, a grim reminder that nature always bats last.

Eighty years after the Dust Bowl, the time has come to implement a diagnostic soil health assessment approach to evaluating the landscape and urban forest. Recently, the Massachusetts’ Legislature weighed in on the question of required soil diagnostics by passing legislation that establishes standards for the application of plant nutrients, including limitations on phosphorus-containing fertilizer, to non-agricultural turf and lawns. In time, I believe additional legislation will eventually require diagnostics for all levels of landscape installation, establishment, and maintenance not just turf.

The legislative process only addresses part of the problem. As we strive to better understand how to manage soil, we should give deeper thought to our role as it pertains to the bigger picture of land. Most of my agrarian studies have common themes expressing soil as a gift, a privilege, and an opportunity. The soil health model emphasizes these themes while at the same time addressing future stewards of the land who have a responsibility to pass it on to the next generation in better condition than they received it.

Chuck Sherzi, Jr. is co-owner of Sherzi & Company, LLC a fine garden maintenance and estate management company located in Andover, MA. He holds a B.S in Plant and Soil Science from the University of Massachusetts, Amherst and an A.S. in Horticulture from Massachusetts Bay Community College, Wellesley, MA. Chuck served as an instructor of professional practice at the Landscape Institute, Arnold Arboretum of Harvard University, developing and teaching the soils curriculum, and he has taught a series of landscape best management practices workshops.