By i.am.georgia.harris on April 15, 2022 in Designing Ecological Landscapes, Native Plants

This article originally appeared in Connecticut Gardener and is reprinted with their permission and permission of the author.

Ferns are the ancient plants in our landscapes. We see them every time we walk into the woodlands or drive along a country road. They cover old stone walls and flourish in wetlands and meadows. Yet, how often do we think of using them in our gardens?

Most of our built landscapes are filled with vigorously blooming perennials and annuals, sometimes flowering shrubs or evergreens to act as hedges or winter screening. But it was not always this way.

In Victorian England, ferns became a sign of wealth and advanced intellect. Women developed an interest in ferns and would travel out on weekend ‘fern forays’ with young gentlemen. It was seen as an opportunity for women to show interest in intellectual pursuits at a time when they were not allowed to attend Universities, own property or vote and allowed them to experience physical exercise. Fern collecting was a pastime that many participated in, and Wardian cases (terrariums) and greenhouses became popular for preserving the fern specimens collected in the wild. In Victorian England, fern appreciation was considered to represent a higher intellectual capacity as reflected in this quote from Abraham Stansfield, dated 1858: “The bright colours of flowers are admired by the least intellectual but the beauty of form and texture of ferns requires a higher degree of mental perception and a more cultivated intellect for its proper appreciation. Hence we regard the growing taste for the cultivation of ferns as proof of mental advancement.”

Today, the collection of plant species is discouraged, and plant propagation has become a better way of sharing and procuring native species. However, fern propagation from spores is more challenging than seed production. Is this part of the reason ferns seem to have dropped out of production and out of our plant palette as we design our gardens? The lack of availability of many species and the expectation that ferns are ‘difficult’ to grow in the garden may have contributed to their fall from favor. 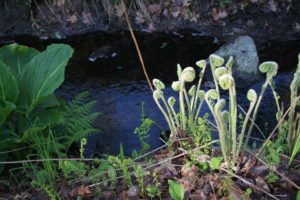 One of the most interesting questions that I get about ferns is what is their ecological value? What ecological services do they provide? First, I like to remind people that ferns have been part of our flora for thousands of years. Some of the oldest plants, in geologic terms, are ferns. They have existed with trees, shrubs and herbaceous plants for eons and clearly have a place among those species. Secondly, wildlife does use ferns. Small birds will use cinnamon fern (Osmundastrum cinnamomeum) for nesting material. I have observed nuthatch and chickadee grasping the stalk and rubbing their beaks up and down the stalk, collecting the abundant ‘fuzz’ or indumentum, which is then used to line their nests. Spiders and caterpillars may use the fern fronds as ‘homes’ by curling up the tips of the frond and binding them together with silk or webs. The insects use this ‘fern ball’ as a nest or home for some period of time, even eating parts of the frond as they live within it. Deer will often graze the tips of taller species as they wander past. Although the clear use of the fern plant material may not always be obvious, there is a connection between our fern species and our local insect, bird and mammal populations.

Recently, there seems to be a resurgence of interest in ferns. These plants are actually very versatile and can be used in a wide variety of garden settings. Gardeners should not succumb to the belief that ferns are difficult, need plenty of water and only grow in deep shade. The opposite is quite true. Ferns grow in as many conditions as may exist in our garden settings and can occupy niches where a bold and hardy plant is needed to grow.

Ferns for Every Garden Niche 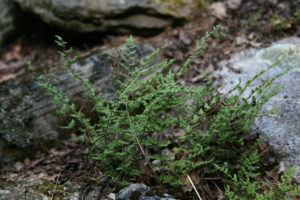 Hairy Lip Fern (Cheilanthes lanosa) is one of the rare ferns that thrive in a sunny rock garden.

Although most don’t realize it, ferns can grow in full sun, thriving in rock gardens or rambling across the landscape. Hairy Lip Fern (Cheilanthes lanosa) is one species that thrive in rock gardens in full sun. The plant has adapted to full sun and wind conditions. These small clump-forming ferns have dark brown to black stalks and small gray-green leaflets (pinnae). The pinnae and the stalk have a dense covering of silvery hairs. These small hairs help to reflect sunlight and deflect winds in rocky outcrops to help them to thrive in sunny conditions. Another great sun-loving species for the rock garden is purple cliff brake (Pellaea atropurpurea), which has a bit of an un-fern-like appearance. The frond is divided into long, thin, pale gray-green lobes resembling more of a divided leaf rather than a fern frond. The stalk or stipe is deep purple to black. Another species that grows in open sites is hay-scented fern (Dennstaedtia punctilobula). Although this is NOT a species for the garden, it is perfect in difficult areas – under large maples, in poor soils where other plants don’t thrive – this fern can spread and form large colonies in some of the most difficult conditions. It is a great filler plant where others refuse to grow. 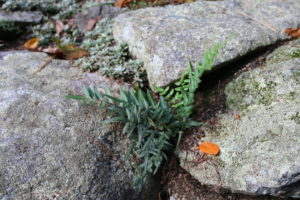 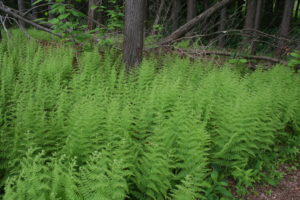 Hay-scented fern (Dennstaedtia punctilobula) grows in open sites but should only be used in the most difficult areas.

Some species do best in moist to wet locations that are either seasonally or perpetually wet to moist. Ostrich Fern (Matttucceia struthiopters v. pensylvanica) is a most desirable species for seasonal wet areas that even become inundated with water in spring. Ostrich fern is adapted to growing in river flood plains where the stream overwhelms the bank and deposits new silt or loam along the edge of the river. It is best known as the ‘fiddlehead fern’, the only species in New England that is edible. In early spring, foragers will search along river banks for the new, emerging fronds in a stage known as the fiddlehead and harvest them. Taken in reasonable quantities, the ostrich fern will still redevelop new fiddleheads and continue to maturity. In summer, it has a magnificent form: Its fronds resemble feathers and are broadest close to the tip. The fronds are large (3’ – 4’) and bright green. They have a true ‘vase shape’ with each plant being individual – narrow at the base, opening up into a broad circle of fronds. 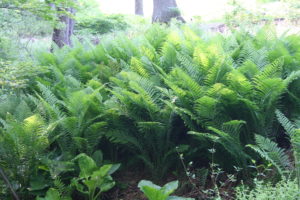 The greatest variety of ferns are found in moderate to deep shade. Abundant forms, sizes, and colors will thrive where the sun is less intense. Wood ferns (Dryopteris sp.) are diverse in form and size and are easier to find in nurseries than some other fern species. Marginal wood fern (Dryopteris marginalis) is one of our more common wood ferns. It is tolerant of drier soils to moist ones, it has glossy dark green foliage, and the fronds stay green through much of the fall and winter – providing winter interest. The fiddleheads and stalks are covered with beautiful golden scales. These scales give the young fronds the appearance of ‘animal feet’ as they emerge in the late spring. This may be a good point to note that many ferns are slower to emerge and mature in the garden each spring. Fern fronds are usually unfurling in mid-to-late May, long after the Dutchman’s breeches and trout lilies have bloomed and shed their petals. Ferns allow the smaller more delicate spring ephemerals to go through much of their early life cycle before they fully open their fronds. 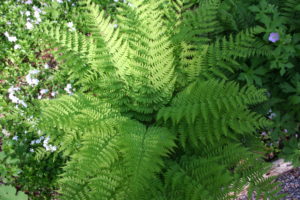 Ferns do not only come in that ‘vase shape’ form, where all the fronds arise from the base and form a circle of foliage at the top. Although each individual plant seems separate, vase-shaped ferns still spread underground, creating a colony of plants. Certain ferns have a ‘running habit’, indicating that their rhizomes spread beneath the soil (a rhizome is a horizontal stem that grows under the soil surface). This group of ferns tends to create a colony of individual stems that seem to enlarge over time into a mass. One such species that is worth considering in the garden is McKay’s fragile fern (Cystopteris tenuis). Despite its name, this plant is far from being fragile. Fragile fern emerges earlier in the spring than most ferns. Its fronds are bright, almost lime, green color in early May, making a startling statement in the early spring garden. The fronds never get taller than about 6” to 8”, so it is a fern that mixes well with smaller perennials. The fragile fern is easy to divide and transplant. Although it is a spreading species, it is not rampant – but a well-behaved fern rambling slowly through the garden. 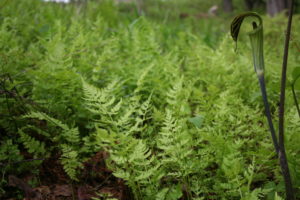 McKay’s fragile fern (Cystopteris tenuis) is a well-behaved addition to your garden.

Ferns can have unusual colors and foliage shapes – this is one of the reasons that fern collecting was so popular in Victorian England. At that time, people were searching for plants with a ruffled appearance or unusual colors in the foliage. Male ferns (Dryopteris filix-mas) often exhibit these unusual forms, and many have been selected for the nursery trade. Their pinnae (leaflets) split and diverge at the tips. Many have crested or frilly edges; sometimes, the leaflets are particularly thin or cross in different ways. Victorian lady fern (Athyrium filix-femina ‘Victoriae’) has pinnae that form X’s along the stalk, providing a whimsical interest in the garden. A non-native species that is very popular is the Japanese painted fern (Athyrium niponicum var. pictum) which has unusual color – its fronds are a mix of silver, green and red, and the stipe or stalk is also red in color. This silvery foliage can light up a shade garden, and when planted with other red or white flowers, it can create a lovely color pattern. One native species that has been selected for its color is the red-stemmed lady fern (Athyrium angustum ‘Lady in Red’). This fern has blood-red stalks and is quite striking as they unfurl in the spring. A fern with an unusual texture for the garden is the long beech fern (Phegopteris connectilis). Its fronds are long, lightly fuzzy, and narrow. The last two pinnae point backward, away from the rest, giving it a unique appearance. It is a slow, spreading plant that can be used as a nice ground cover when allowed to spread through the garden. 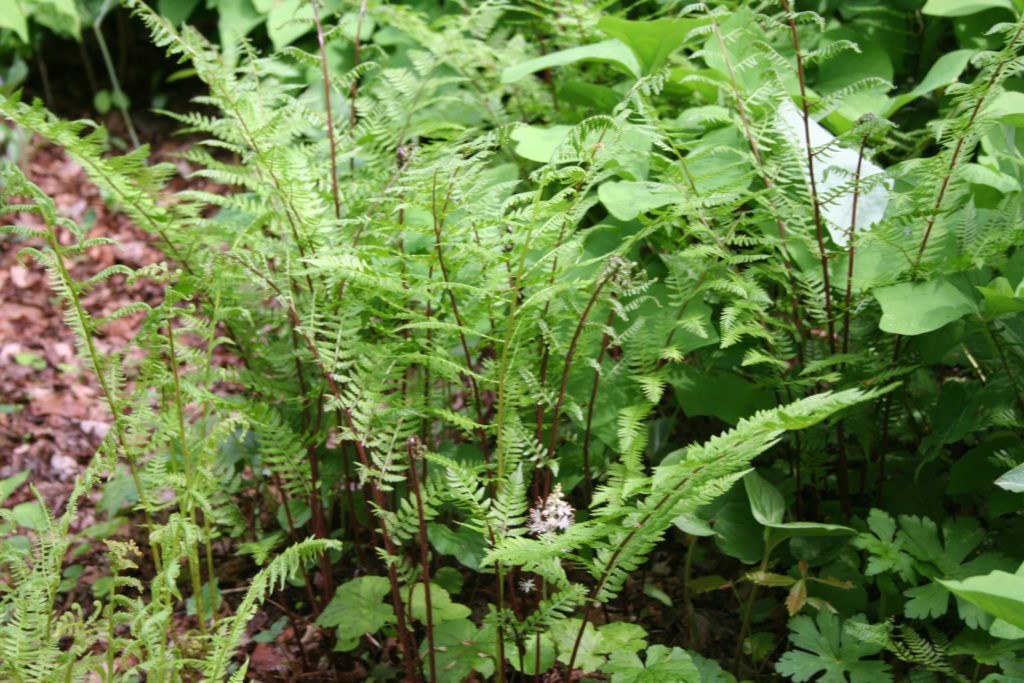 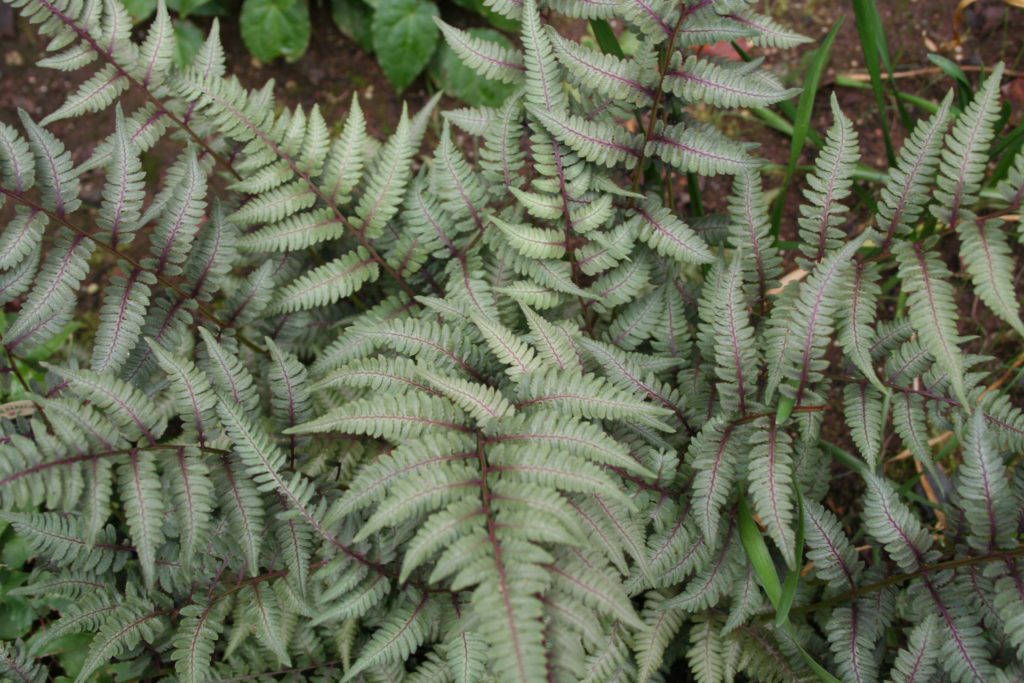 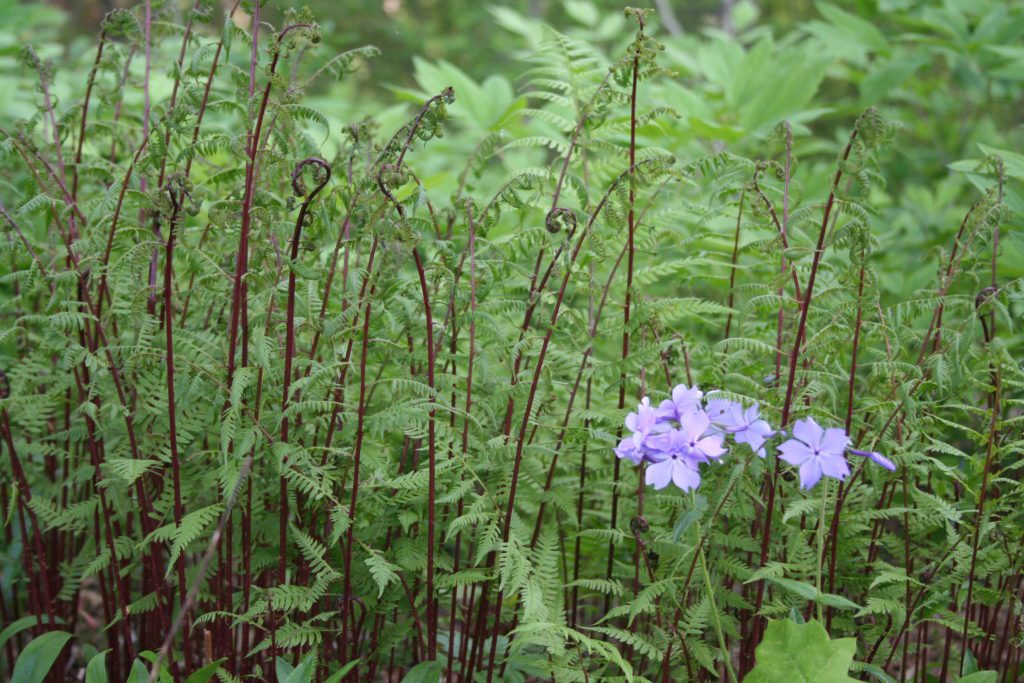 Ferns are a diverse group – providing color, interest and texture for every garden. Select them for sun or shade, in poor, rocky soils, wet areas or average garden soils. Ferns can fill those challenging places in your landscape and bring diversity and wildlife to your gardens. Talk to your local nurserymen and ask them to supply ferns for your garden – as we request these different plants, they are usually willing to seek them out.

Leslie Duthie is a native plant horticulturist and has worked for over 40 years in the field. She started her journey into native plants at Garden in the Woods but spent most of her career transforming the public landscape of the Norcross Wildlife Sanctuary into various habitat gardens, including shade gardens, meadow enhancement and a large sand plain garden. She has retired from working at a garden and is transforming her own personal space into a combination of the native and garden plants she loves.