By Penny Lewis on April 15, 2014 in Native Plants, Wildlife Habitats

Our spring wildflowers, many of them ephemerals that grace our woodlands for only a brief period each year, are intricately tied to other organisms in the environment. Their flowering time evolved over millennia in woodlands that once cloaked most of the eastern part of the country. During colonial times the forests were cleared for building and heating materials, and the land converted to farmland. When greener pastures and richer soils were discovered in the Midwest, many early settlers moved west allowing much of the eastern farmland to slowly regenerate to forest. It is in these forests and woodlands that our spring wildflowers are found.

Spring ephemerals emerge at a time when conditions are optimal for small plants living on the forest floor: the longer days bring increased warmth and sunlight, and insects are beginning to stir. Ground-dwelling plants have only this narrow window to accomplish growth, photosynthesis, reproduction, and food storage before the canopy trees above leaf out and block the sun’s rays from reaching the forest floor. True ephemerals may be present for only a matter of weeks, during which time they produce leaves, flowers, fruits, and seeds before they senesce and disappear from view. Of course, the plants don’t die—most of our native spring ephemerals are perennials with corms, bulblets, or other underground structures that are used for storing that year’s manufactured carbohydrates that will allow for growth to take place the following spring. 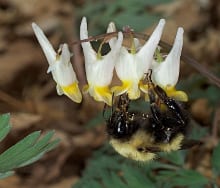 A queen bumblebee inserts her long proboscis into the tip of the flower of Dutchman’s breeches to obtain nectar.

Our native spring wildflowers are rarely found along roadsides. To see them requires a pleasant walk in the woods. Once encountered, patient observation will reward the viewer with the delight of witnessing some of the fascinating interactions between these delicate flowers and their pollinators or seed dispersers. Some things to look for are discussed below.

Dutchman’s breeches (Dicentra cucullaria) are one of our earliest blooming spring wildflowers. Named for their unique floral structure—much like that of miniature old-fashioned Dutch pantaloons—the flowers bloom at just the time that native queen bumblebees (Bombus spp.) arise from their long winter hibernation. 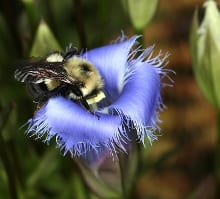 A worker bumblebee visits the flower of fringed gentian (Gentianopsis crinata) in autumn.

Queens are the only members of the previous year’s colony to have survived the winter, and it is their responsibility to found a new colony. They need nectar to supply their own energy requirements and pollen with which to provision their nests for the larvae that will develop from their previously fertilized eggs. Copious nectar may be obtained from the flowers of Dutchman’s breeches. Bumblebees are one of the few insects with a long enough proboscis (tongue) to reach the tip of the flower’s spur petal (the “pantaloon leg”) where the nectar is held. These bees are one of the most important pollinators of our spring, summer, and even fall wildflowers such as gentians. 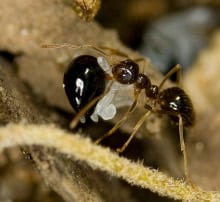 An ant carries the seed of Dutchman’s breeches back to its nest where it will eat the white fleshy structure that is attached to the seed.

Dutchman’s breeches also have a close relationship with ants. Ants gather their seeds and carry them off to their nests where they chew off the nutrient-rich fatty appendages (elaiosomes) thus dispersing the seeds to other localities. This strategy for seed dispersal is employed by many of our favorite spring wildflowers, among them: bloodroot, trillium, trout lily, and hepatica.

Other native bees are equally important pollinators of spring wildflowers. These are small, solitary bees belonging to several different families. Notable among them are the andrenid bees (genus Andrena), which can be seen gathering pollen to provision their underground nests for the season’s larvae. 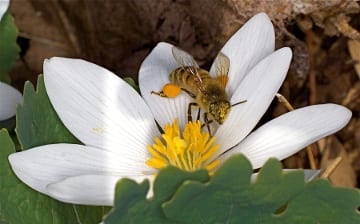 A small andrenid bee packs the pollen baskets on her hind legs with pollen from bloodroot (Sanguinaria canadensis).

Bloodroot, trout lily, and spring beauty are especially reliant on the pollination services of small solitary bees. Although solitary, andrenids build their individual tunnels in “communities,” that resemble colonies of ant nests. They are usually at the margins of forests or in open areas. The females can be observed entering their nest holes with the pollen baskets on their hind legs packed with pollen, and then leaving with empty pollen baskets, to embark on another pollen-gathering foray. 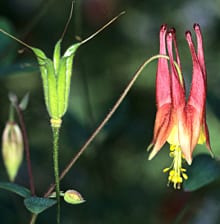 The long-spurred red flowers of columbine are attractive to hummingbirds, which return in spring at the same time that the columbine flowers appear.

Eastern columbine (Aquilegia canadensis) has one of the few red flowers found in the Northeast. Red is a color known to be visible to birds, and in combination with long nectar spurs, the flower is ideally suited to attract hummingbirds. The hummingbird migration coincides with the time that columbine begins to flower. The nectar they provide is one of the first available for local ruby-throated hummingbirds and it provides an energy source for those birds continuing to migrate further north. Resident hummingbirds will benefit from planting the late summer-blooming cardinal flower as a nectar source for birds preparing to migrate south again. 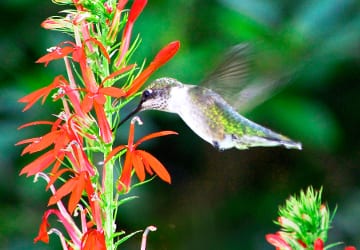 Butterflies are more numerous in summer months and play a role in the pollination of many summer wildflowers, but one early-flying species may be seen visiting our violets (Viola spp.) each spring—the West Virginia White (Pieris virginiensis). 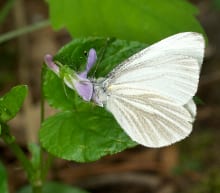 This small white butterfly is a relative of the vegetable garden pest, the Cabbage White. Indeed, in early spring the West Virginia White lays her eggs on other spring ephemerals: toothworts (Cardamine spp.) that are members of the cabbage family. Their caterpillars feed on the leaves, but meanwhile the adult butterflies visit and pollinate the flowers of several species of violets. The result is sometimes hybridization between the species. 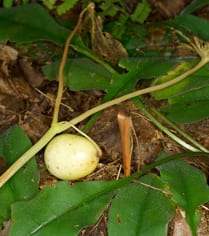 A ripe fruit of Mayapple has pulled the plant to the ground at the end of summer.

Lastly, I’d like to mention another dispersal agent, one that may come as a surprise. The fruits of Mayapple (Podophyllum peltatum) do not ripen until late in the summer, when they turn soft and yellow. The weight of the heavy fruit causes the senescing leaf stalk to bend, letting the fruit rest on the ground. It emits a pleasant, fruity aroma that serves to attract…box turtles (Terrapene carolina)! Box turtles relish the sweet flesh of these fruits (warning—all parts of the plant are poisonous to humans including the fruit, excepting when it is truly ripe). The seeds pass slowly through the turtle’s digestive system and are deposited at some distance from the parent plant. Studies have shown that seeds that have been transported by turtles have a 40% higher successful germination rate than those just left on the ground. 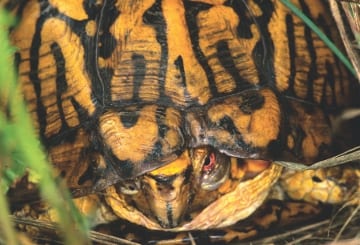 The seeds of Mayapple have a higher germination rate after passing through the digestive tract of a box turtle.

There is an increased interest in growing native plants in our gardens. As evident in this brief article, spring wildflowers are an important component of our forest ecosystems. Their decline (a result of many factors not discussed here) impacts a chain of other organisms: native bees, which are important for pollination of many plants; hummingbirds needing sustenance for their continued migration north; early-flying butterflies; and herbivorous insects. Although the beauty of native spring wildflowers is short-lived, I encourage you to plant them in your woodlands. These are the plants with which our native insects and birds evolved. By protecting and restoring native forest wildflowers, you can aid in perpetuating an important interdependent ecosystem. Forest wildflowers, especially those that hold their leaves throughout the summer (e.g., bloodroot, wild ginger, and Mayapple) make nice ground covers in shady areas, help prevent soil erosion, and make it more difficult for alien species to invade.

Carol Gracie is retired from The New York Botanical Garden, where she headed the Children’s Education Program and the Foreign Tour Program. Carol has made dozens of trips to South and Central America, both for botanical collecting expeditions and as a tour leader and has had five newly discovered tropical plant species named for her. She is a co-author, with her husband, Scott Mori, of the two-volume Guide to the Vascular Plants of Central French Guiana. Carol has since returned to her earlier interest in local flora and is the photographer and co-author, with Steve Clemants, of Wildflowers in the Field and Forest: A Field Guide to the Northeastern United States (Oxford University Press, 2006). Her latest book, Spring Wildflowers of the Northeast: A Natural History, was published by Princeton University Press in 2012. Carol is currently working on a book on the natural history of summer wildflowers, also to be published by Princeton.