By Penny Lewis on April 15, 2014 in Landscape Design, Native Plants

I often see new landscapes that look great immediately after installation, and continue to thrive for five to ten years. Beyond those five to ten years, I find that a majority of landscapes, especially the plantings, look tired, thin, and lacking in vitality. When I first started working in the industry during the early 1990s, common practices included either installing a landscape and then planning on ‘re-installing’ the planting areas after a period of time, or selling intensive maintenance plans with the installation. A majority of designs often lacked forethought as to how the project would look and perform beyond five to ten years, or how the areas would look if not intensively managed. 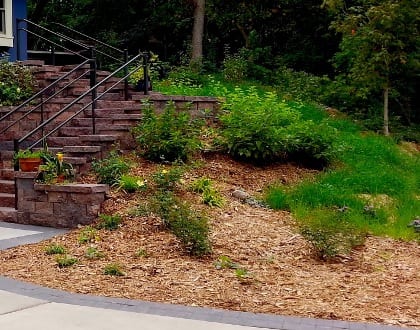 The design of this Minneapolis landscape plans for a succession of dominant species.

One of the tools we designers have is expecting and using succession. By assessing the different influencing environmental effects in and on the landscape we can improve the chance of success of landscape plantings.

Webster’s dictionary defines succession basically as a group, type or series that succeeds or displaces another. The dictionary also defines ecologic succession as the process of change in an ecosystem brought about by the replacement of components of a community until a stable climax community is established. Succession is far more complex than either of these definitions.

Several groups and individuals have promoted ecological succession theories and models have been defined from the theories promoted. Here are a few of the theories that have been promoted over the past 100 years.

The realm of ecological succession theories can get quite detailed, and further defining of the theories and their matrixes would result in volumes of information.    A project that I completed in 2013 demonstrates the practical application of these theories and shows my approach to informed design with a knowledge of succession.

Water management is a major concern given the 40 percent slope in the front yard.

The project is new construction in St. Paul, MN; the residential structure was built from November 2012 to August 2013. The lot was one of the few remaining vacant lots in the city of St Paul. Water management was and is a concern since the existing lot has slopes of 40 percent in the front of the lot and 10 percent in the back. The clients wanted to minimize their impact on the neighboring residences as well as the neighborhood at large. The location was primarily vegetated with Acer negundo (box elder) and Rhamnus carthartica (common buckthorn). The neighboring properties are vegetated with mature Quercus alba (white oak), Q. rubra (red oak), and Juglans nigra (black walnut), so neighboring tree survival was a priority during and after construction. The new homeowners wanted a lower-maintenance landscape as well as areas of specific plants and vegetation.

Succession in this project is based on the expected life of the residence structure (a minimum of 100 + years) and, ideally, the longevity of the Quercus alba (white oak) planted during the landscape installation. Seasonal management of the landscape will be required to keep the landscape in the Savanna biome typically found in the Minneapolis/St. Paul area, since the pre-European settlement herbivores are mostly gone (i.e. bison). Also, fire events are virtually gone and not practical in some residential areas. Management techniques to maintain the Savanna structure will include manual removal of undesirable woody species either through pulling or cutting. Custom mixes of native seeds and live plants were made with four main growing conditions which included savanna/dry short grass prairie, savanna/mesic short grass prairie, seasonal wet meadow, and woodland understory.

During the design phase, we assumed that the residence, landscape hardscape features (i.e. retaining structures, steps, patios, etc.), and the land grading (i.e. keyline swales, rain gardens) would remain static in the landscape.  It was important to identify the plant species used in the landscape that were desired to be part of the climax community as well as those that would be present during  the timespan the current residents would use the area. 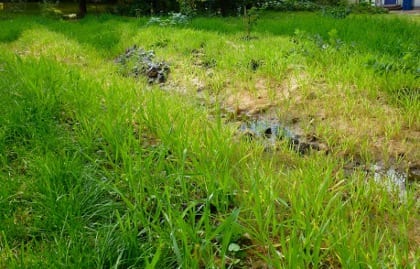 Four weeks after seeding, a variety of grasses have emerged in the keyline swales.

Components of the landscape plantings were assumed to be part of the climax community. We planned for the shade and fruiting trees and sun and understory shrub layers to be part of the final plant community. Some of those plants include Quercus alba, Acer saccahrum, Pyrus sp., Malus sp., Corylus americana, Amelanchier sp., and Cornus sp. The residents also desired an herb and small annual vegetable area as well as specific foundation shrubs and perennials. We placed the higher maintenance plantings close to the residence structure for ease of maintaining.

As in most planting designs, seasonal changes in plant accents were taken into consideration, including ephemeral, spring, summer, autumn blooming, and winter color accents. We included an annual cover crop of winter-wheat (Triticum aestivum) in the succession plan to start accumulating organic material.  Native annuals including Impatiens repens, and Chamaecrista fasciculata were used for rapid flowering plant establishment. The abundance of pioneering species on site were allowed to seed and sprout without assistance, including Hydrophyllum virginianum and Amphicarpaea bractea. 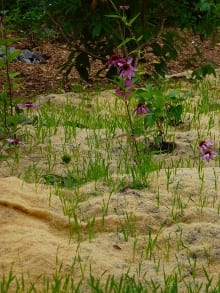 Perennial grasses of similar growth patterns and looks were used in all areas. For example, we used Elymus canadensis in the sunnier locations and Elymus villosus in the shaded locations. As the landscape matures and shade cover increases the Elymus villosus is expected to increase dominance in the areas previously occupied by E. canadensis.  Shorter-lived ‘nativars’ such as Echinacea purpurea ‘Pow wow’ were planted in masses, and the native wild type (Echinacea purpurea) were inter-seeded in the same locations in the assumption that the wild type will take over the mass area as the variety type fades. The perennial plants will be allowed to self-seed to fill in areas vacated by other plants.

Moisture levels are expected to change as the seasons change and as climate patterns change. The contouring of the landscape is designed to maximize the water soil infiltration on site. Specific areas will have higher soil moisture content as the season(s) progress, even if the location has periods of drought. Spring and early summer months have become increasingly wet, and the later summer and autumn have been dry (if the past three seasons in the twin cities are used as an indicator.)  To accommodate the swings in precipitation, we seeded the low areas with several different Juncus sp. and Carex sp., some have a higher moisture tolerance and other are more tolerant of drier conditions. The idea is some species will perform better during different time frames, but still give a similar look in the landscape regardless of rainfall. The limited turf areas were over-seeded with introduced cool-season grasses (Festuca sp.) and native warm-season grasses (Bouteloua gracilis and Eragrostis spectabilis) to assist the turf areas remaining green during the entire growing season.

As the landscape matures, especially during the first few years, site evaluations are scheduled to determine the progress of the planting areas. Changes, both anticipated and unanticipated, will be noted and any species additions or removals will be determined at that time based on how the overall community is establishing.

Regardless of how much preparation is taken, not all outcomes can be determined prior to starting the project, but we can use the tools and information available to make the best plan when designing landscape plantings for long-term viability. Dave Jacke states in Edible Forest Gardens, “Human life spans are quite limited compared to successional timeframes. Therefore, design each garden that recedes ahead of you.”

Further brief information concerning this project can be found at www.habadapt.com/portfolio/water-and-succession-in-mind.

Daniel Peterson is the sole proprietor of Habadapt Landscape Design in Minneapolis, MN since 2005. He earned his baccalaureate and master degrees from the University of Minnesota, where his graduate work focused on natural community restoration, invasive species management, and GIS mapping of the Minneapolis park systems’ natural communities. Dan may be reached at dan@habadapt.com.

MV Wildtype: Acting Locally on the Island of Martha’s Vineyard
The Lives of Spring Wildflowers