By i.am.georgia.harris on March 15, 2021 in Landscape Challenges, Managing Water in the Landscape, Stormwater Management

Erosion Control on the Track

This article first posted in the July 2020 issue of Storm Water Magazine. and is reprinted with the permission of the author. 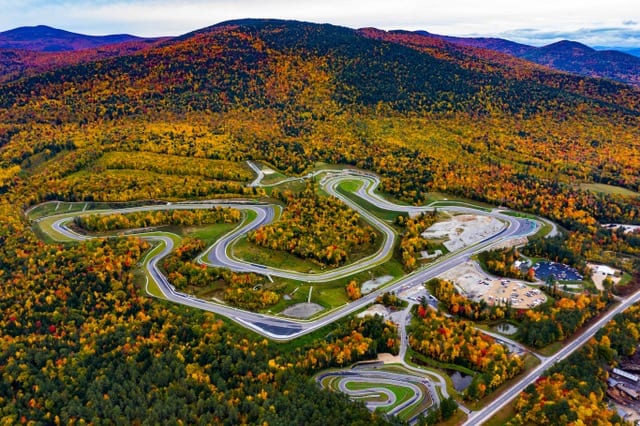 The grass swales, elevation difference, and track width of 50 feet meant a simple rain event could cause a large amount of watershed.

In 2013, Club Motorsports began construction of a unique private race track at the southern edge of the New Hampshire White Mountains. They designed the track with the idea in mind of a “country club” for car enthusiasts. The design featured a 2.5-mile road course on 100+ wooded acres and boasted breathtaking views of the mountain range to the north. The beauty in the design was only outweighed by the impossible landscape it would cover. It would take over four years, blasting nearly 200,000 cubic yards of ledge and moving over a million cubic yards of material to complete.

The challenge of this project was incorporating 250 feet of elevation change into 15 individual track turns.  The design of each turn was to have its own unique beauty, which added to the complexity of the project. Racing curbs flowed into grassed shoulders and large grassed drainage swales. The grass swales, along with the major elevation difference, and an average track width of 50 feet, would mean a simple rain event would cause a tremendous amount of watershed. The stormwater runoff would devastate the site, but the unique elevation change and aesthetics of the grass shoulders all added to the lure and mystique of the track. It was clear that creative erosion control was going to be the answer. 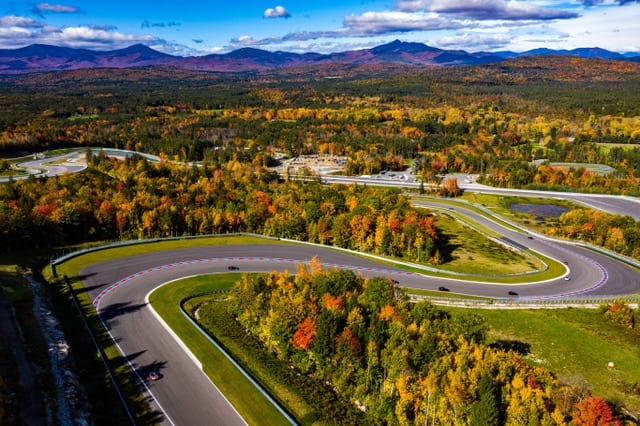 One of the first items needed for this project was sustainable vegetation.

One of the first things needed for this project was to establish sustainable vegetation. The first method used was to install Rolled Erosion Control Blanket (RECB) on the slopes around the track. This process was a great solution in the majority of the sections. Before beginning installation, the seed was applied. Next, a small trench was dug at the top of the slope to create a “keyway’ for the blanket. One thing to note is the importance of always stapling and burying the RECB in the keyway. This prevents stormwater from flowing under the blanket from the top of the slope. Once the RECB was secured at the top of the slope, it was rolled down and stretched tight to ensure good ground contact, overlapping the sides of the blanket. If there are any void spaces, it will give water an opportunity to pick up speed and take the material with it. At this point, the appropriate amount of staples were applied in a specific pattern. This process continued until all the slopes were covered. The few sections that did not take well suffered undermining of the blanket. This was likely caused by ground obstructions such as roots, rocks, or twigs. These objects can create void space under the blanket, preventing good ground contact.

For the next process, we applied Hydraulic Erosion Control Mulches (HECP) through a method known as hydroseeding. Any mulch, seed, fertilizer, and water needed were added to the tank of the hydroseeder. The mixture was emulsified, then sprayed on the area that required vegetation. The process is like spraying on a liquid blanket to both the flat areas and the slopes. Unlike RECB, the hydroseeding process will provide full coverage, regardless of ground obstructions. For the flat areas and smaller slopes, we used a simple base mulch of  70/30 wood to paper blend. On the steeper areas, we needed to use an erosion control mulch. In this application, we used both a bonded fiber matrix (BFM) and a flexible growth medium (FGM).

One of the design challenges mentioned earlier was the large grass drainage swales for stormwater control. The original design called for a rock riprap in the drainage ways, a common application throughout New England. I suggested we use grass in the swales to be more aesthetically pleasing and environmentally friendly. My recommendation was to use a turf reinforcement mat (TRM) and then hydroseed it with the FGM. In contrast to a RECB that is designed to degrade over time, a TRM is a permanent erosion control blanket used in areas with a potential for high volumes of water. After some discussion, the project engineer created new details and integrated the grass swales in place of the rock riprap.

Once the project was well underway, we experienced some significant rain events. The track was fully paved, and the topsoil was installed throughout the shoulders of the track. Erosion control methods had not yet been applied to the new topsoil, leaving them vulnerable to the weather. The heavy rains were sheeting over the 50-foot wide track onto unprotected topsoil. This volume of stormwater runoff threatened to undermine the new pavement. To resolve the situation, compost filter socks and straw wattles were put in place along the edge of the pavement to slow the stormwater velocity and minimize additional soil loss. Having the compost filter socks on the edge of the track was also a great way to filter out sediments and hydrocarbons from the stormwater passing over the new asphalt. On a side note, as word spread that the track had now been paved, prospects from far and wide wanted to come test out the track. The compost filter socks needed to stay in place for continued erosion control but needed to be moved off the track during a demonstration to prevent them from being struck. This turned into a shuffle game with the socks, and I was very impressed at how long they held up with so much disturbance.

After the weather passed, we began spaying the BFM and FGM on the track shoulders to established vegetation quickly. Since the shoulders would require working with compacted soils, a new challenge arose.  The shoulders had to be compacted, so cars had the ability to skid off the track without creating large ruts, causing a  safety issue for other cars. The challenge is that trying to establish vegetation in compacted soils is very difficult. We did multiple soil tests to see what would be needed to build up the soil health. We added quick-acting lime, quick starting fertilizers, and a slow-release organic fertilizer. This combination was very successful, but we anticipated some trouble areas needing special attention. Sections of the shoulder with concentrated stormwater runoff were of particular concern. In those areas, we added a specific geocell cellular confinement system to structurally confine the topsoil and allow the vegetation to establish.

Lastly, the concrete racing curbs were installed, and a slot-drain system was placed strategically along the track in areas that see a lot of stormwater runoff. In some areas where the racing curb was installed, either a rigid panel grass pave system or a geocell cellular confinement system was installed along the back side. These were used to allow for vegetation and the ability to support the weight of a run-away car.

The private race track was completed in 2017 and has been busy with car clubs and enthusiasts cruising around ever since.  In my opinion, the track is a destination place. Absolutely beautiful with turns, hills, and breathtaking views. It was a pleasure working with the entire team on this project, and I was honored for the opportunity to be involved. If anyone has an interest in getting more information on the products used on this project or the race track itself, please feel free to contact me. 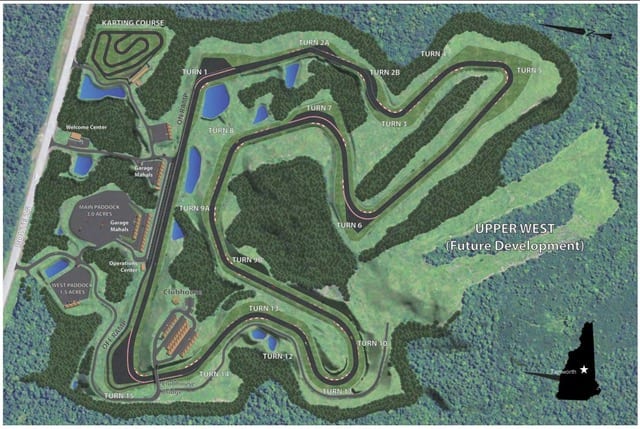 A slot-drain system was installed along parts of the track that see a lot of runoff.

Jim Gove – Gove Environmental. He is one of the top Wetland Scientists in the State of New Hampshire.

Mike Everhart has worked for EJ Prescott, Inc. since 2009. Mike’s current title is Eastern Erosion Control & Geo-Product Specialist. Since joining EJ Prescott, Mike has spoken at National and Regional conferences and numerous Erosion Control workshops and seminars. Also, he has been published in Stormwater Solutions Magazine. Mike is a current member of the NHTOA, NHANRS, and the AGC Environmental Committee of New Hampshire. Mike holds a diploma in Architectural and Civil Technologies and has over 18 years of experience in grading, drainage, and erosion control design and consulting.