Here in the northeastern United States, there are three commonly used sources of water for irrigation. These are domestic (city) water, surface water, and groundwater. Each of these sources has its own distinct set of issues related to its use in supplying landscape irrigation systems. The purpose of this article is to outline the issues that might be experienced using each source in order to help readers better determine the most suitable water source for any particular irrigation system.

In urban and suburban areas, domestic water is the most common source of water for small scale project sites. These parcel sizes typically have fewer than two acres of irrigation. Domestic water is very high quality and is often delivered to a site with enough pressure to operate the irrigation system directly, without the need for a booster pump. A subsurface irrigation system requires a backflow preventer which is a device installed to prevent any water from flowing from the site back into the domestic water system. Irrigation systems have the potential to draw fertilizers and other harmful material into them and as a result precautions are necessary to protect the drinking water supply. 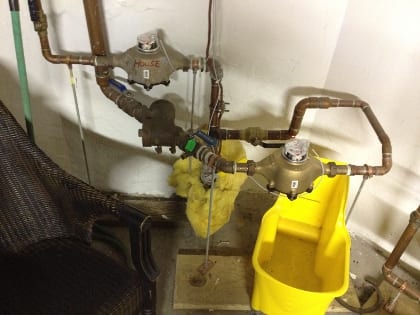 Domestic water can be fairly expensive to purchase over the course of the irrigation season. Several communities allow for metering irrigation systems separately to abate sewer charges. Sewer bills are based on the amount of water used on the entire site as measured through the primary water meter. Irrigation water use does not return to the sanitary sewer system, thus some municipalities allow customers to subtract irrigation water use from their sewer bills. Domestic water users should contact their local water departments to determine if this is allowed in their community.

Overall, the primary benefits of using domestic water are the following:

The costs/downside of using domestic water are the following: 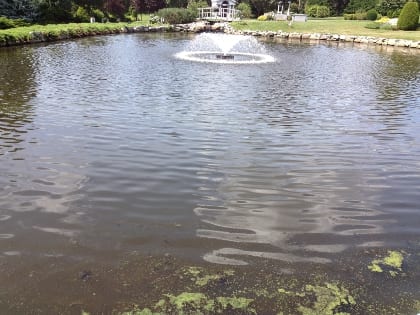 An irrigation pond located in the northeastern U.S. shows signs of algae growth.

Surface water can often be a reliable source of water for irrigation, especially when it is supplied from groundwater or surface runoff from a significant watershed. Surface water that receives direct runoff from urban/suburban watersheds is often high in nutrients and suspended solids. In these cases, the surface water body can be at risk for seasonal algae blooms. To mitigate the effects of higher nutrients, pond aerators and filters could be necessary to control algae and prevent sediment from entering the irrigation system.

In most cases, the amount of water that can be withdrawn from any surface water body is regulated. The amount of water able to be withdrawn without a permit varies from state to state. If a pond is being considered for use as an irrigation water supply, the state should be contacted to determine the threshold volume of water that can be used without requiring a water withdrawal permit. Furthermore, any construction activities in close proximity to any natural resource area are typically regulated by the state and/or local conservation commissions. Construction permits could be required.

Overall, the primary benefits of using surface water for irrigation are the following:

The costs/downside of using surface water are the following:

Groundwater is a widely used source of irrigation water for commercial, institutional, and residential projects. Groundwater is extracted through a well. A typical irrigation well consists of a drilled borehole with a submersible pump set deep in the well. Groundwater wells are either installed in an aquifer consisting of either solid bedrock, or sand and gravel. Although sand and gravel wells are generally more productive in their yield of water, bedrock wells are more common for landscape irrigation systems due to costs and typical hydro-geology in most regions of the Northeast. 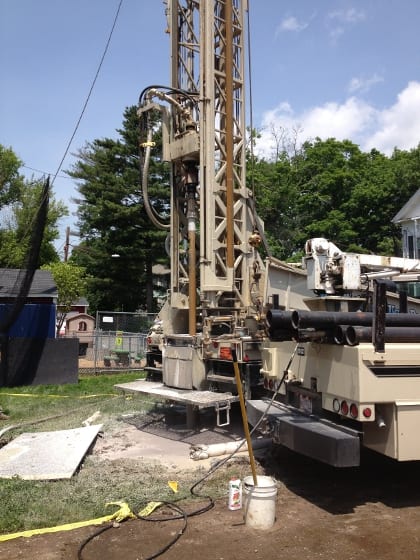 Construction of an irrigation well can disrupt a significant footprint.

When drilling wells for irrigation, there is no guarantee that the required yield will be achieved. Before drilling a well for irrigation, local well drillers should be consulted to discuss the yield of neighboring wells and how deep the well should be drilled. Typically, a well should yield enough water to enable watering of an entire site in eight hours. Unlike wells planned for household uses, irrigation wells require higher yields for long durations. After the well has been drilled, a minimum pumping test of eight hours should be conducted to determine the sustainable yield that can be withdrawn continuously for 8 to 12 hours per day. The test will also provide valuable information for pump sizing and the depth at which the pump should be installed in the well.

The quality of water supplied from a bedrock irrigation well is generally very good. However, a water quality/chemistry test should be conducted before using the water for irrigation. The two most common elements found in bedrock wells which can impact irrigation suitability are iron and manganese. Although neither of these two elements present a great risk to plants and soils, they both can stain any paved areas or building facades that irrigation spray hits. Furthermore, these elements can potentially clog irrigation nozzles and emitters.

Overall, the primary benefits of using groundwater are the following:

The costs/downside of using groundwater are the following:

Jeff Bowman is Senior Project Manager with Irrigation Consulting, Inc., in Pepperell, MA. Since joining the company in 1997, Jeff has worked on over 400 irrigation design and development projects throughout the U.S. and internationally. He obtained a BS in Bio-Resource Engineering from the University of Maine and is a U.S. Green Building council LEED Accredited professional. Jeff is certified through the Irrigation Association as  both a golf course and landscape irrigation designer, as well as a certified landscape irrigation auditor.   He may be reached at jbowman@irrigationconsulting.com.

A Lesson on Connections: “Enhancing Ecosystem Dynamics for Trees” with Michael Phillips
Greywater Made Clear: The Basics