As a student of ecology and an aspiring ecological landscaper, it was a privilege to attend the 2014 ELA conference and learn from many of the leading figures in the field. The conference rooms seemed to reverberate with the buzz of so many excited earth-enthusiasts, communally appreciating what fascinates them most. The general liveliness was underpinned by finely-tuned, intellectual discussions of innovative techniques and new understanding. 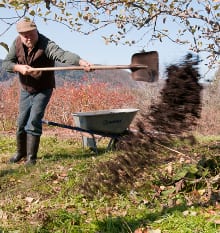 The energy of the conference was in full swing by the time Michael Phillips began his session on Enhancing Ecosystem Dynamics for Trees. During his talk Phillips laid out the essence of his practice at Lost Nation Orchards, an orchard in New Hampshire. The thoughtfulness of his practice simultaneously increases his harvest and pays close attention to the minute and extravagant relationships that exist in nature. As a farmer and steward, Phillips works hard to enhance everything from beneficial fungal growth in the soil to the creation of habitat for pollinators and beneficial predators.

As the well-versed ecologist knows, life begins in the soil. The first important practice emphasized by Phillips is the promotion of mycorrhizal growth to facilitate the uptake of nutrients by fruit trees during maximal growth periods. Having a diversity and abundance of mycorrhizae (fungi that associate with the roots of plants to mutually support each other) drastically increases the soil volume reach of trees. To encourage mycorrhizal growth, Phillips suggests dipping the roots of young plants in a mycorrhizal mix before planting, applying fungal favoring compost or biochar, or  burying dead wood by the root tips of trees. Phillips also suggests the technique of biological mowing, which allows the growth of leafy vegetation beneath the trees until right before the first feeder-root flush of the trees. Right before these plants go to seed, you can mow them and leave them to mulch on the ground where they were growing, increasing the water and nutrient availability for the trees.

A second form of diversity Phillips encourages is the plant diversity of the orchard floor. He personally favors species like comfrey, crocuses, daffodils, crimson clover, lupines, echinacea, lemon balm, native grasses, and woody herbs. Each of these provides an extra layer of dimension and support to the dynamic interplay between species within the ecosystem. He strongly endorses the use of comfrey (with infertile seeds) as a species with a multitude of good qualities. Species like crocuses and daffodils will provide protection from voles, while clover and lupines will fix nitrogen in the soil. Other plants enhance the habitat structurally or provide the food necessary to birds that prey on pest insects. Woody herbs at the base of trees act as mycorrhizal accumulators to further benefit the trees. 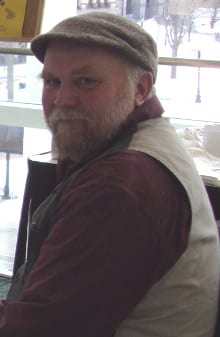 It was fascinating to hear Phillips not just speak of the connections between plants and soil, but also of the wider impact of all species, including field mice, fox, and song birds. I was particularly impressed by his familiarity with the timing of the processes and events that occur throughout the year in his orchard. It is this vital familiarity that I believe has been lost from our culture to the detriment of all earthly things, including humans. I strongly believe there is space in everyone’s practice, no matter the field, to integrate ecological knowledge. For Phillips, an appreciation of ecological connections means a healthier orchard, but the larger lesson he teaches is that by understanding the ecosystems around us we can participate in the mutualisms that exists there and can gain humility in witnessing the capacity and intricacy of nature.

Emma Vautour is currently a senior, studying environmental science at Messiah College in Pennsylvania. Emma hails from State College, PA, where she was born and raised with an affinity for the outdoors. As an intern for Plaster Creek Stewards, a non-profit native landscaping business in Michigan, she developed the dream of having a similar business of her own and aspires to educate others on the importance of ecological design and integration. She may be reached by phone: (814) 933 6197, or email: emmavautour@gmail.com.