By ecopro on March 15, 2012 in Restoration, Urban Landscaping

Throughout New England’s cities and towns there are many uncovered opportunities to reclaim previously developed land. Forgotten over the years, old railroad beds, burned-out mill foundations, and vacant lots have become overgrown with successive vegetation, been vandalized, and used as dumping grounds. Sometimes structures remain, beckoning us from a not so distant past. As our urban centers start to see a new renaissance through the “smart growth” movement gains and as people from the suburbs move back to urban areas, the land these abandoned places occupy is becoming more valuable. 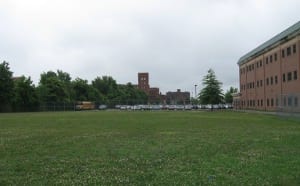 This school-yard property in Springfield was ripe for redevelopment.

We, as designers, planners, regulators and concerned citizens, are more often faced with the exciting task of giving these forgotten places value again. There are however, certain site considerations to keep in mind as you perform your site analysis and choose your design program.

What site considerations should be considered when dealing with previously developed land?

As a landscape architect in Springfield, I was faced with a schoolyard site that was contaminated with PCBs. Assessors’ maps showed that the schoolyard was located where once residential streets, houses, a shopping center, lumber yard, and an old railroad line existed. A Phase 1 environmental site assessment, that would have identified existing environmental contamination liabilities, had not been done on the City-owned property. The City planned to deed the public school property to park land and planned to redevelop it as a public park. The site was located in the middle of a dense neighborhood with a limited number of public green spaces and few opportunities for recreation, so a definite need was there for more green space. 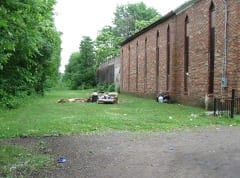 A former railroad line ran adjacent to the school property.

Considering the site’s history, we dug test pits and uncovered old foundations, bricks, and construction debris. We found the soils to be a mix of infill soils, but the native parent material was a nice sandy loam. Soil samples were sent to a lab to test for contaminants. Because the site was near a railway, contaminants from chemicals such as creosote, oil, gasoline, cleaning solvents, herbicides, fossil fuel combustion products (PAHs), roofing shingles (asbestos), air compressors, transformers and capacitors, and metals were expected to be found. Lo and behold, the site exceeded the reportable detection limit for PCBs. 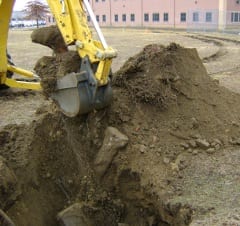 Due to time and budget constraints, and the site’s intended double use as a park and school playground, the only viable option was to excavate and dispose of the soils offsite. The site was originally very flat to begin with and because of loss of soil, clean soil from offsite had to be trucked in. 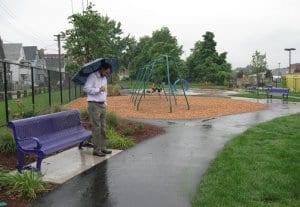 Dedicated fall of 2011, Rebecca M. Johnson Park is now enjoyed by both the school and the surrounding neighborhood. 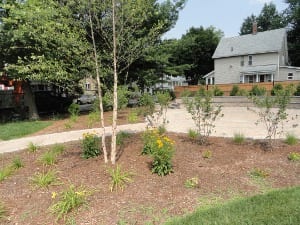 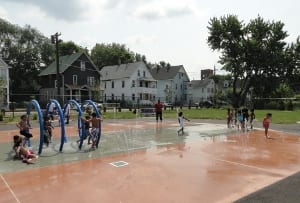 Used water from the “Waterspray Park” is infiltrated into the site’s sandy soils via underground storage tanks instead of being discharged to the City’s combined sewer system. 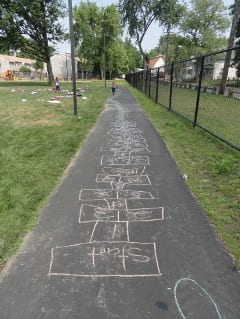 Park pathways were paved to be accessible and low maintenance.

The lesson learned from this project is that you can never be too sure about what existed on pre-developed land before you got there. Only a careful search of past land-uses, subsurface exploration, and testing of the soil will tell you what kind of site you are faced with. As landscape professionals we should not be discouraged about working with untarnished land, because by cleaning up and reusing contaminated and exploited land, we are able to protect pristine land and slow the sprawl.

Anja Ryan is a registered professional landscape architect in the state of Connecticut and is working to attain her Massachusetts professional license. She enjoys working on projects that provide passive and recreational green spaces in urban areas. She has been a member of the ELA for two years, and it is her goal to work with Cities and Towns on implementing ecological landscape design and maintenance practices. She has started a community garden with her apartment-complex neighbors in the City of Holyoke and looks forward to reaping the benefits of a fully organic garden this year.