About five years ago, while living in a small house with a small backyard, I was fortunate to be introduced to bokashi composting. Whereas standard compost piles rely on the presence of oxygen for decomposition to occur, the bokashi method is a two-step process in which the first step occurs in the absence of oxygen. You take a five-gallon bucket with an air-tight lid and place your kitchen scraps into it. Then you sprinkle bacteria-and-yeast-inoculated bran on top of the kitchen scraps and close the bucket. (This inoculated bran can easily be purchased on Etsy or Amazon, but if you’re up for it, it’s not too difficult to make your own. More on that later.) You repeat this process until the bucket is full, then you let the bucket sit for two to three weeks.

The kitchen scraps undergo a fermentation process thanks to the microbes living on the bran. If you open the bucket, you’ll notice a vinegar-like smell. You might see a white fuzz develop on the kitchen scraps, an indication that the fermentation process is going well. Then comes the fun part. You dig a hole in the ground, dump the bucket into the hole, and cover it with at least six inches of soil. That’s it. The fermentation process has broken down your scraps and primed them for quick consumption by the soil food web. Within a month, the vast majority of scraps will have vanished, incorporated into the soil by the cacophony of resident life. 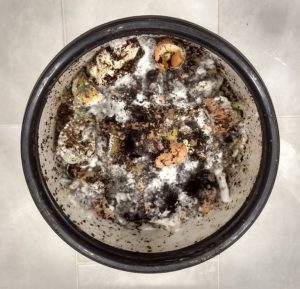 As seen from the top, white fuzz grows on kitchen scraps in a five-gallon bucket.

Don’t take my word of it. Return with a shovel and confirm for yourself! During my two years of gardening in that small backyard, I almost never used fertilizer, just dug in the fermented scraps, and the plants grew well. A note: avoid digging the fermented scraps near existing plant roots, so as not to damage them. After approximately two weeks in the soil, the scraps are rendered mostly inert, and you can plant into the soil on top without worry.

An Internet search yields a somewhat hazy picture of the history of bokashi composting. It is believed by some to have its origins in ancient Korea. However, its modern popularity stems from research done by Dr. Teguo Higa in the early 1980s while studying microbiology in Okinawa, Japan. He discovered a combination of bacteria and yeasts which he patented, copyrighted, and named Effective Microorganisms 1, or EM1. Most bokashi brans on the market today use EM1 in their formulation. 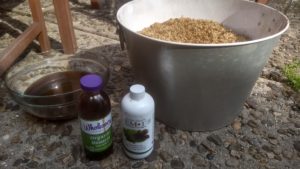 A mixture of water, EM1, and molasses await incorporation into a bran & coffee chaff substrate as part of a bokashi recipe.

The inoculated bran can be purchased on Etsy or Amazon, it’s not too difficult to make your own. Procure some EM1 in a bottle (also available for purchase online), molasses, and bran. Then search online for a recipe, and you’re off to the races. You can experiment with different substrates as well. For my batch, I used coffee chaff from a generous local roaster and bran in equal parts, and it worked out just fine.

The benefits are manifold. This composting method takes less space and less tending than a traditional compost pile. In addition, the microbes are perfectly capable of digesting dairy and meat scraps. Although these scraps can be composted in open-air compost piles, many people avoid them for fear of attracting pests. In a closed air-tight system, that concern evaporates. Furthermore, most of the nutrients in this closed system are retained, whereas in open-air compost piles, many of them “burn off.” Finally, this composting method can be practiced throughout the winter – just store the buckets until the ground has thawed and dig them in.