The use of environmentally friendly materials is becoming widely accepted in all trades. Eco-friendly products are common on the shelves of every garden store. Most people have a favorable view of the branding. Yet, a more environmentally friendly approach to landscaping often involves skipping the shelf with the new products and instead seeking found and recovered materials.

The source could be the property on which you are working, a neighborhood Craigslist posting, or even a local retailer like the Reuse Center at Boston Building Resource. However, the aesthetics of re-use may be at odds with the goals of a project. Therefore, it is important to develop language about the aesthetics of the practice. For instance, using found materials can result in an instantly aged piece that blends in with an established landscape. Exhibit A: Brick mosaic walkway. 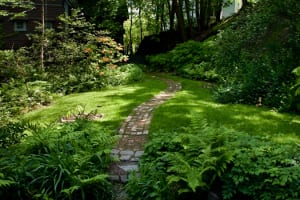 A found-brick pathway leads to a carriage house.

The walkway was constructed in November of 2010. This rare half-acre property in Boston boasts a mature garden that has been developed over the last 25 years. Much of the garden lies beneath a 200 year-old white oak whose canopy stretches over about a quarter of the property’s open space. A puddingstone outcrop draped with wildflowers and ferns is perched above the garden, with a wooded lot below another adjacent outcrop. 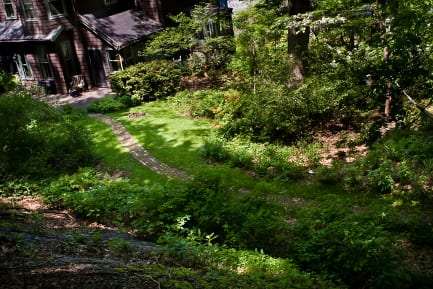 The view from the puddingstone outcrop shows the entire sweep of the walkway.

The walk connects the deck of the residence to the carriage house, which is used for storage and workshop space. The sweep follows the contours of the mature gardens, which are planted and maintained to have an informal, forest-like appearance. The entire course of the walkway is approximately seventy-five feet.

The walkway is set in sand, which was found in the basement of the carriage house (pictured in background), and stabilized with stone dust. The stone dust was the only material that was purchased and transported for the project. The soil that was excavated was used to fill planters and create mounds where the garden is being extended into the lowest tier of the property.

A close-up of the brick in front of the carriage house shows the color variation.

The brick is a combination of whole and fractured pieces that were dumped on the property long ago. Many of them are still washed with a layer of mortar. The lighter colored bricks add contrast and reveal the course of the pathway at night. You can see light touches of moss on various bricks. The presence of moss belies the six-month age of the walkway. 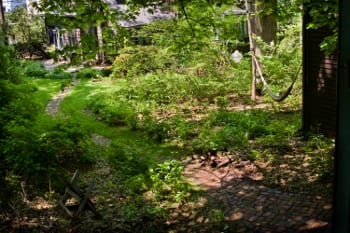 The walk widens as it meets the entryway to the carriage house.

The walkway widens to meet the cobbles at the garage door, next to which I established new plantings. To fatten the thin and depleted soils around the foundation of the carriage house, I used shredded leaves from the oaks and maples that shade the yard. Worms had devoured the leaves from the previous fall and left behind rich compost by early summer. Neighbors supplied some of the plants from their gardens while others were divided from elsewhere in the client’s yard. The plants will fill in to resemble the mature look of the rest of the garden. 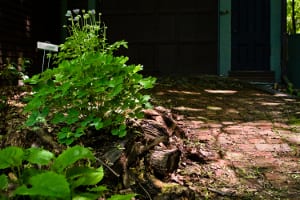 Columbine thrives among the decaying logs near the entryway to the carriage house.

A desultory arrangement of rotting logs hosts columbine and ferns, which I planted. The flowered sentry appears to have grown there without any help. The walkway begins to widen and then terminates where it meets the cobbles at the carriage house entry.

Benjamin Crouch is the proprietor of Land of Plenty, which specializes in edible and naturalistic landscapes for Greater Boston. Ben was previously Urban Orchards director for the Boston-based non-profit, EarthWorks. For more information about Land of Plenty, go to www.landofplentygardens.com.

Kimberly Moa is a Boston-based freelance photographer and photojournalist originally from the island of O’ahu. Her work can be found at moaphotography.wordpress.com.