By Maureen Sundberg on March 17, 2016 in Landscape Design, Plant Science

With new cultivars arriving on the market each year, it’s hard to deny the incredible popularity of coreopsis. Their colorful, daisy-like blooms are a coveted addition to the summer landscape. Unfortunately, many people are frustrated with coreopsis due to their unpredictable and often short-lived nature.  For this reason, Mt. Cuba Center conducted a comprehensive trial of 94 selections of annual and perennial coreopsis in order to determine which are best suited to the mid-Atlantic region. 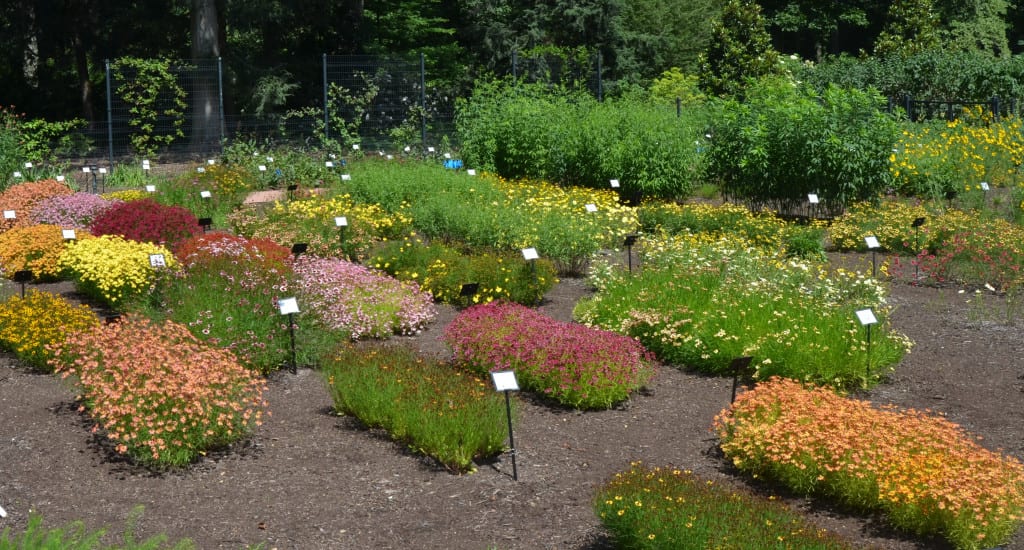 Mt. Cuba Center conducted a comprehensive trial of coreopsis from 2012-2014 to determine the perennial and annual selections best suited to the mid-Atlantic region.

The evaluation was carried out in Mt. Cuba Center’s Trial Garden, located in Hockessin, Delaware, about an hour’s drive south of Philadelphia (USDA Hardiness 6b/7a). From 2012-2014, five plants of each species or cultivar were grown side-by-side in a common garden. Plants were assessed on a weekly basis for their habit, floral display, disease resistance, and longevity. Many of the most popular and colorful cultivars performed poorly due to problems with disease and winter survivability. However, impressive new selections of underutilized native species were recognized and named because of their outstanding performance in our trial. 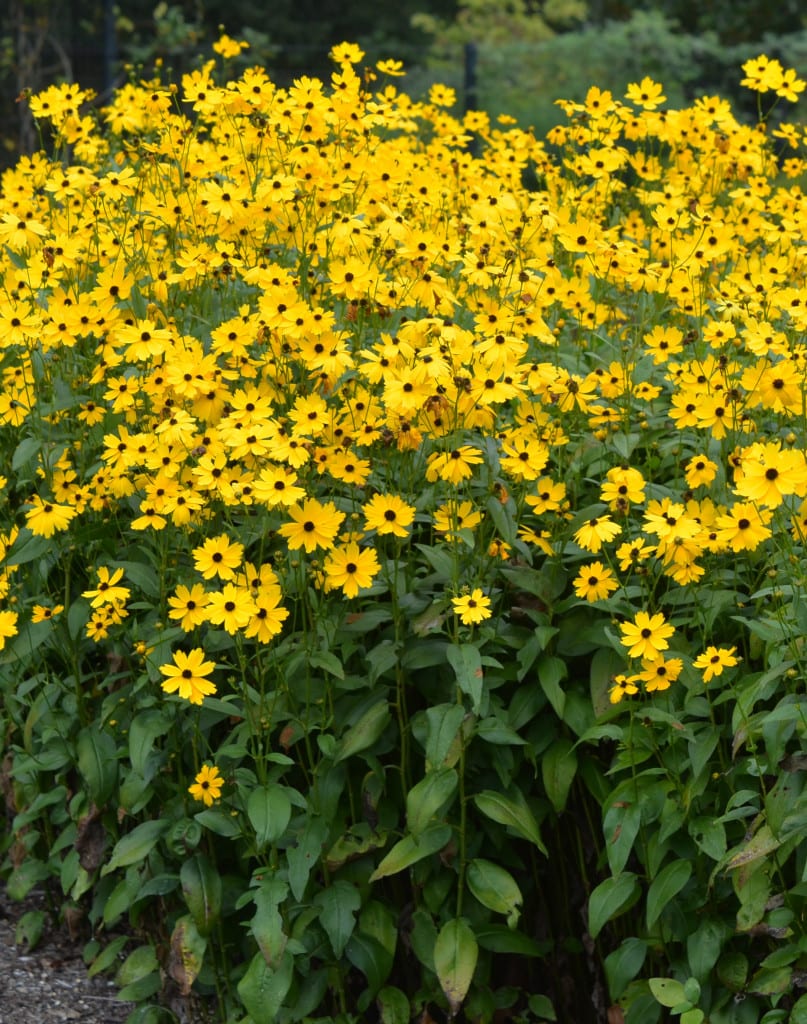 One of those new selections is Coreopsis palustris ‘Summer Sunshine.’ This cultivar is sold by Plant Delight’s Nursery and is the highest-rated coreopsis from our trial. It stands out for its exceptional habit, disease resistance, and overall foliage quality. However, the most interesting thing about ‘Summer Sunshine’ is that is actually blooms in early fall. 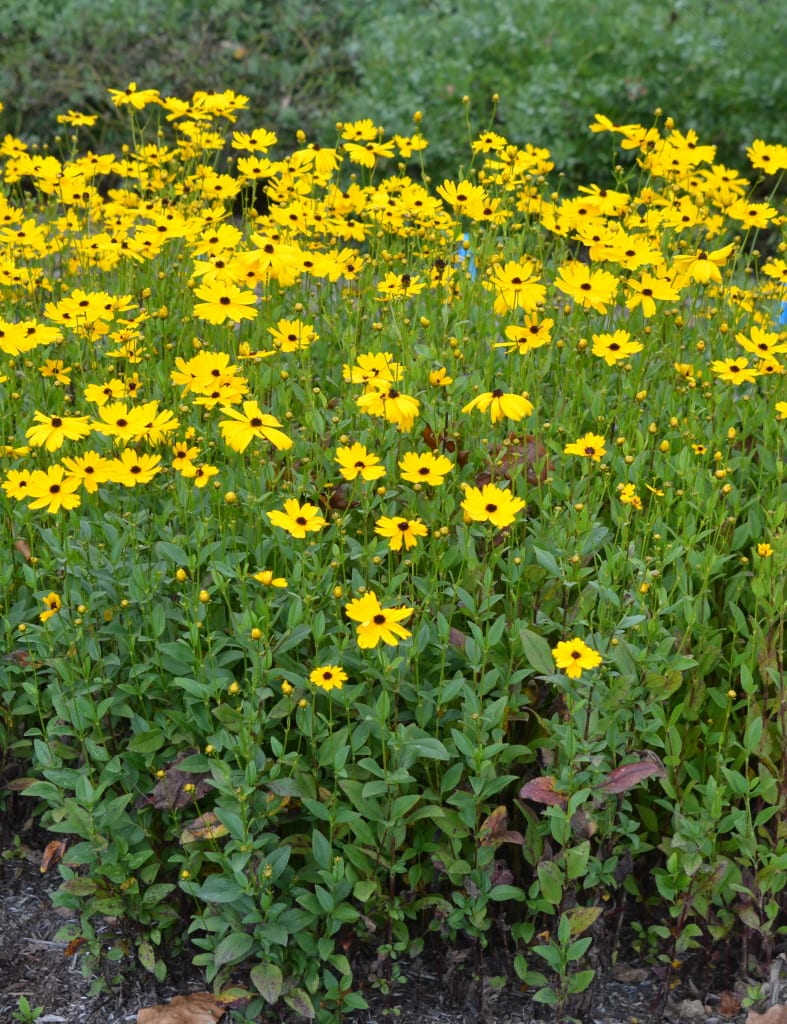 Another top-rated, fall-blooming cultivar is Coreopsis integrifolia ‘Last Dance.’ This selection, from Sunny Border Nurseries, is a great landscaper’s plant. ‘Last Dance’ is slow to emerge in the spring and continues to grow incrementally all season long, such that the plants are still only about one foot tall in midsummer. This makes ‘Last Dance’ a great filler plant, allowing the dark green foliage to act as both a low maintenance “green mulch” as well as a backdrop for summer blooming plants. Flowering in October, ‘Last Dance’ is one of the last perennials to bloom, making it a great companion for asters and native grasses. 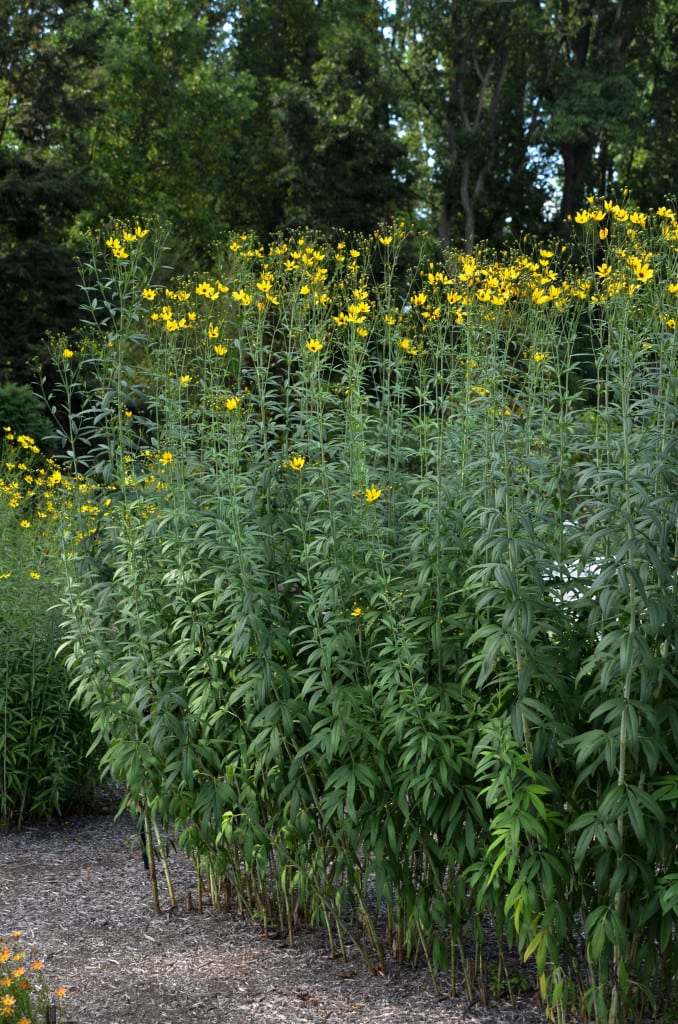 Coreopsis tripteris is well-known in native plant circles; however, this species has never crossed over in mainstream horticulture due to its tall and often floppy habit. Thankfully, two new cultivars, ‘Flower Tower’ and ‘Gold Standard’, are giving C. tripteris some much needed credibility. Coreopsis tripteris ‘Flower Tower’ is the taller of the two cultivars with thick, sturdy stems that can grow as tall as eight feet. Although its height may be a challenge in average-sized gardens, ‘Flower Tower’ is perfect for large-scale landscapes. 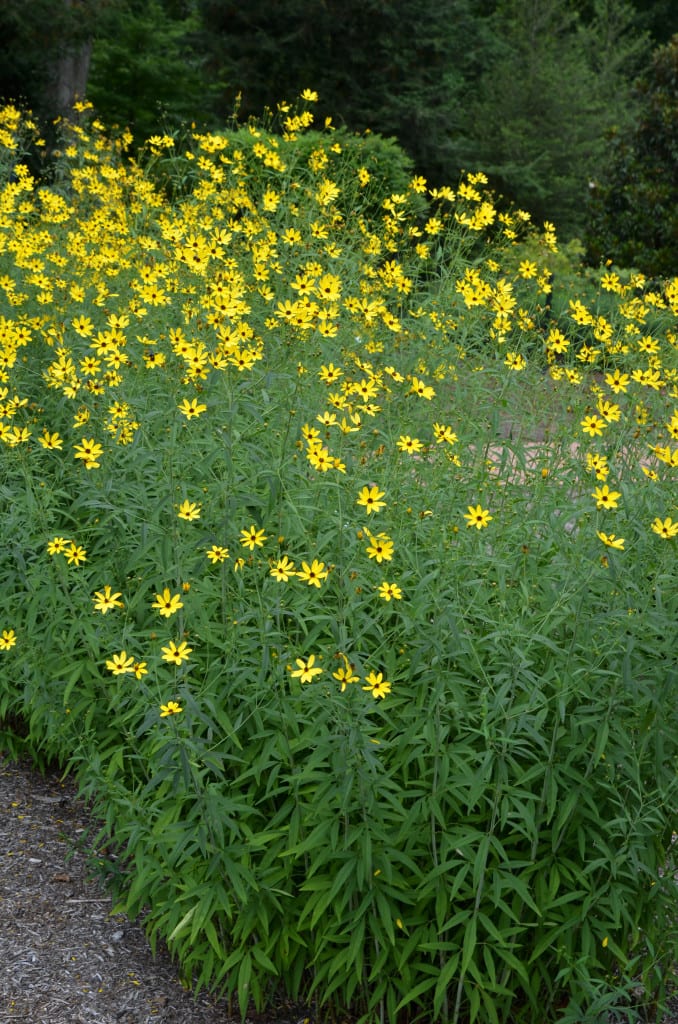 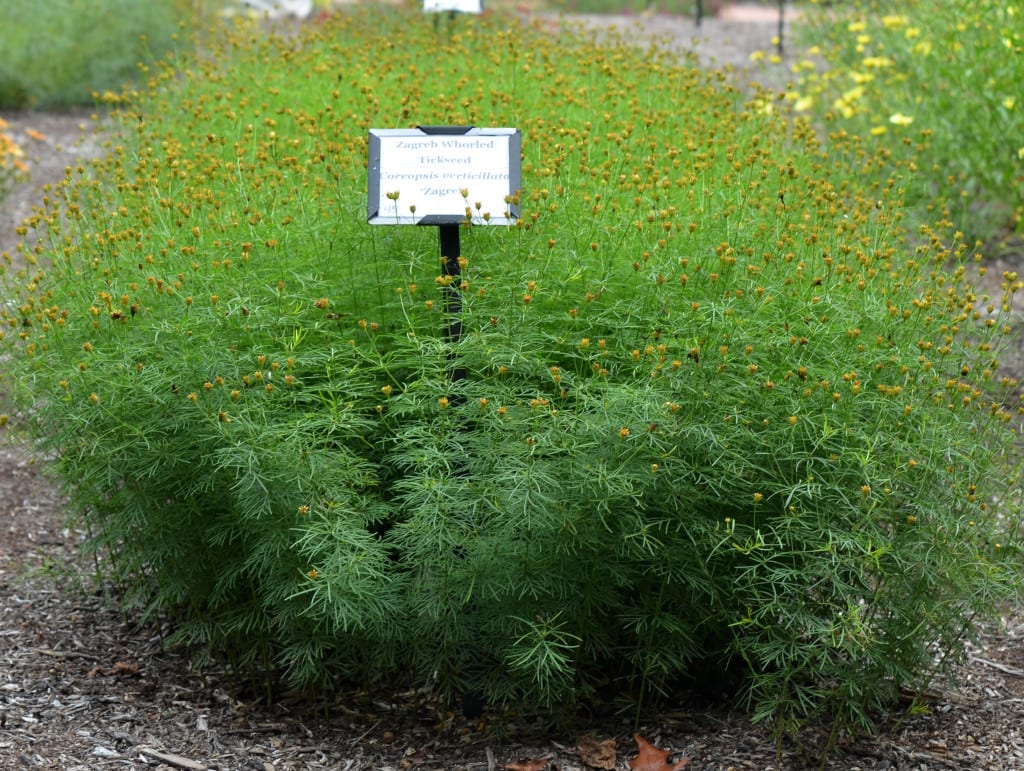 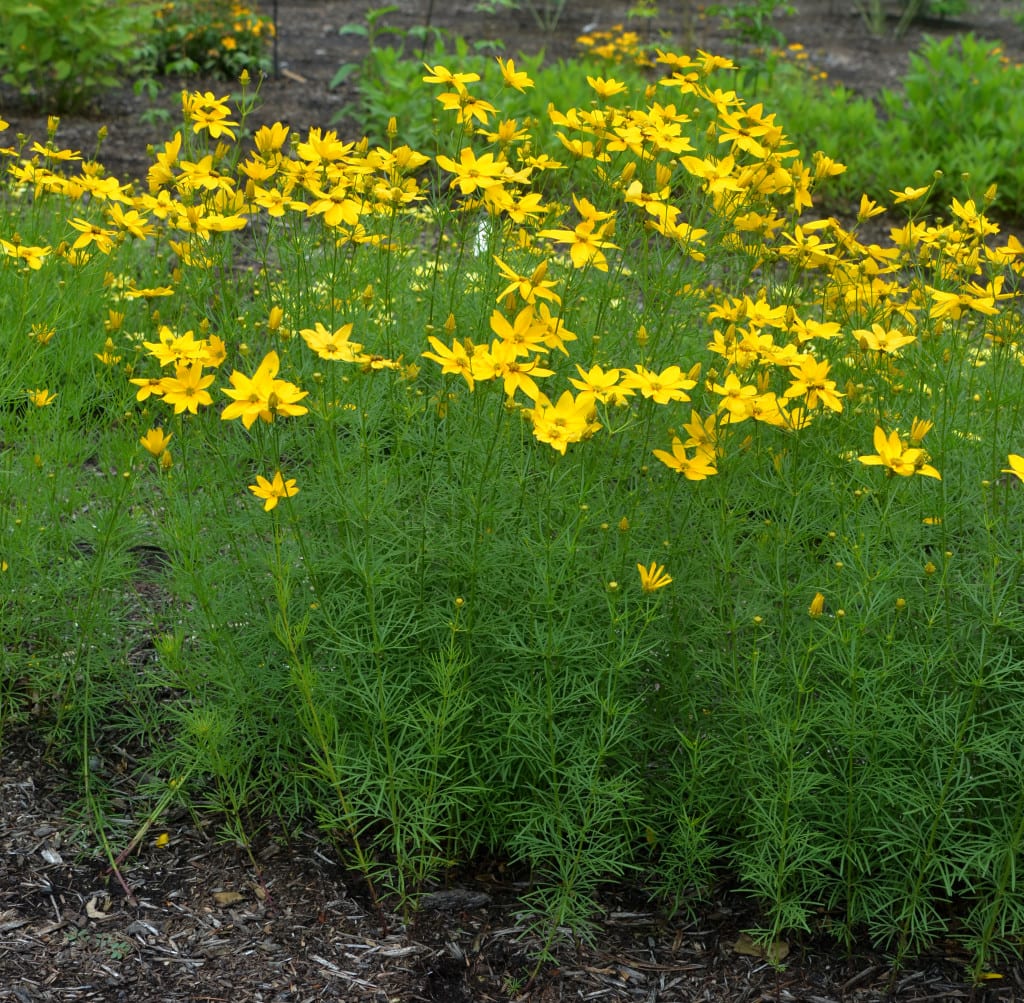 The main difference between the straight species, ‘Zagreb’, and ‘Golden Gain’ is their habit. ‘Zagreb’ has the shortest, most dense habit of the three, while the straight species has a tall and relatively open look. ‘Golden Gain’ falls in the middle of the group with a refined, yet casual appearance. Each selection has its own merits depending on the desired style of a particular landscape. 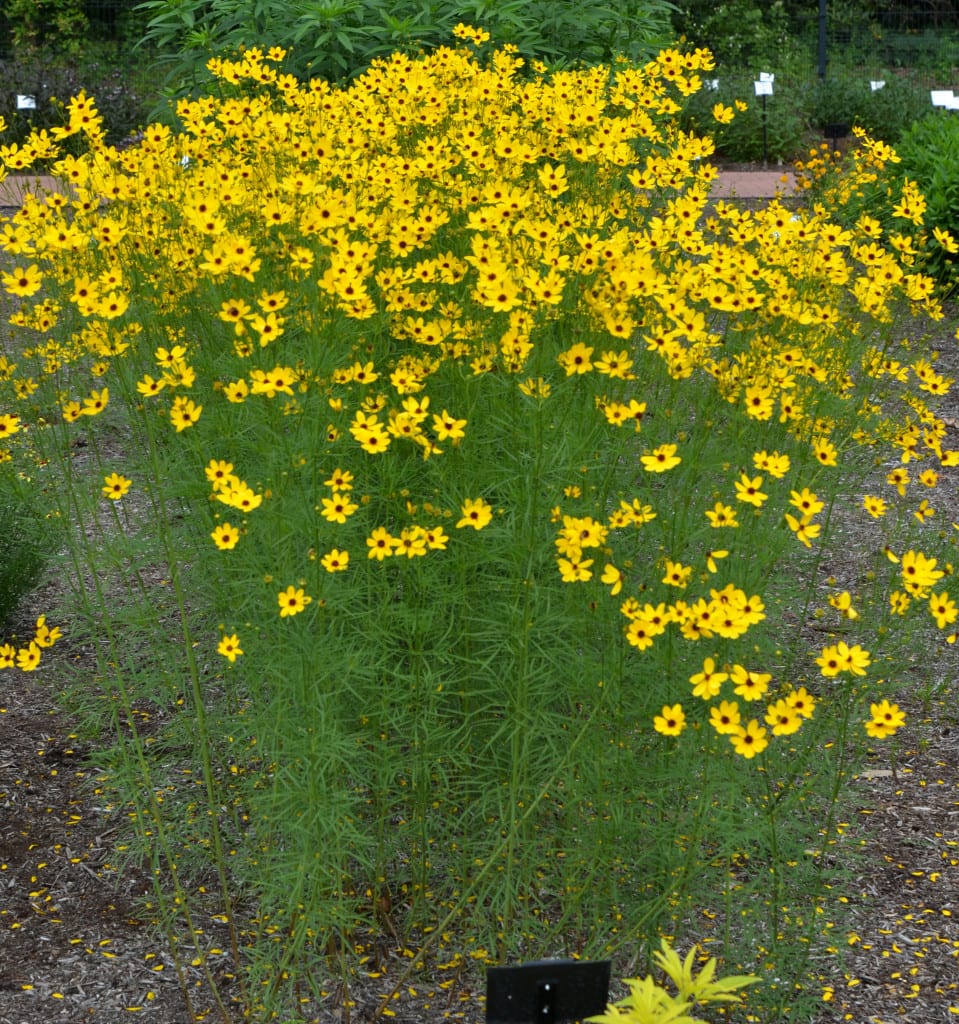 Another top-performing perennial, Coreopsis ‘Gilded Lace’, is a hybrid between Coreopsis tripteris and Coreopsis verticillata. This cultivar combines the best of both species to create a tall, fine-textured plant that blooms non-stop throughout the entire summer. Although not yet commercially available, this cultivar will certainly be popular in the coming years.

The above mentioned plants excelled in our trial because each proved to be sturdy, disease resistant, and most importantly, hardy. Diseases like powdery mildew and downy mildew were significant problems throughout the trial. Downy mildew, in particular, was responsible for the demise of most of the Coreopsis grandiflora cultivars. We also learned of a new disease, fusarium flower rot, which is caused by a fungus that infects the tubular disk flowers at the center of the flower head. 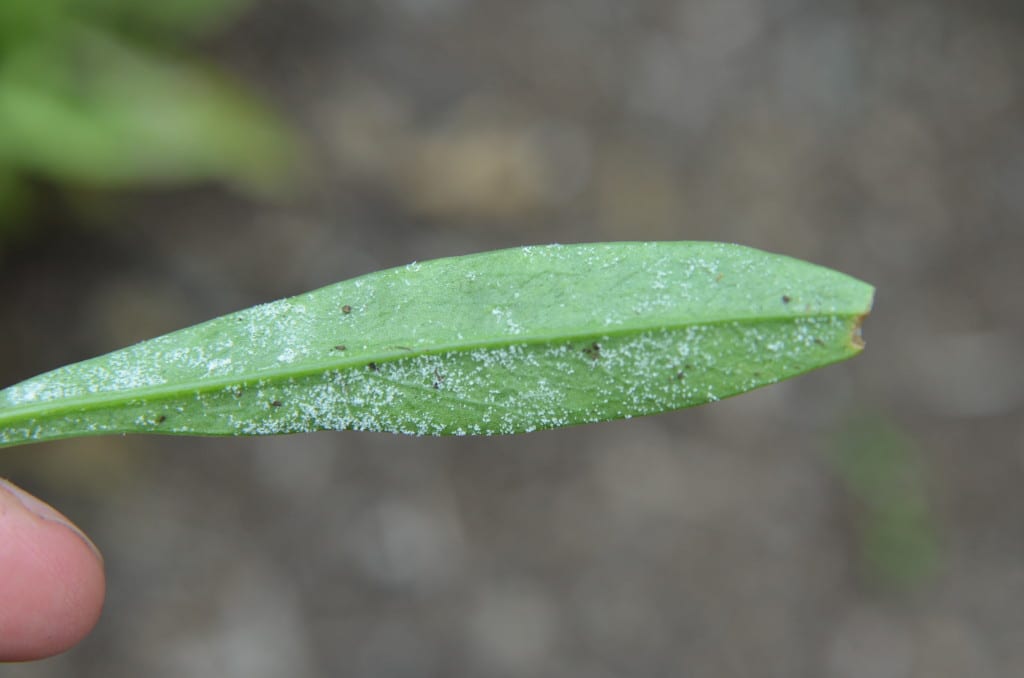 Diseases like powdery mildew and downy mildew (shown here) were significant problems throughout the trial.

To the casual observer, fusarium flower rot results in deformed flowers, often with missing petals. In our trial, we only observed it on hybrids with Coreopsis verticillata parentage. Little is known about fusarium flower rot at this time, but research is being conducted at the University of Connecticut to determine how the disease spreads, and what, if any long-term damage is caused to the plant. According to coreopsis experts, fusarium flower rot has been around for many years, most notably affecting Coreopsis ‘Moonbeam’. This infection may explain why ‘Moonbeam’ did not perform as well as expected in our trial, and why many gardeners believe the cultivar is not as vigorous as it used to be. 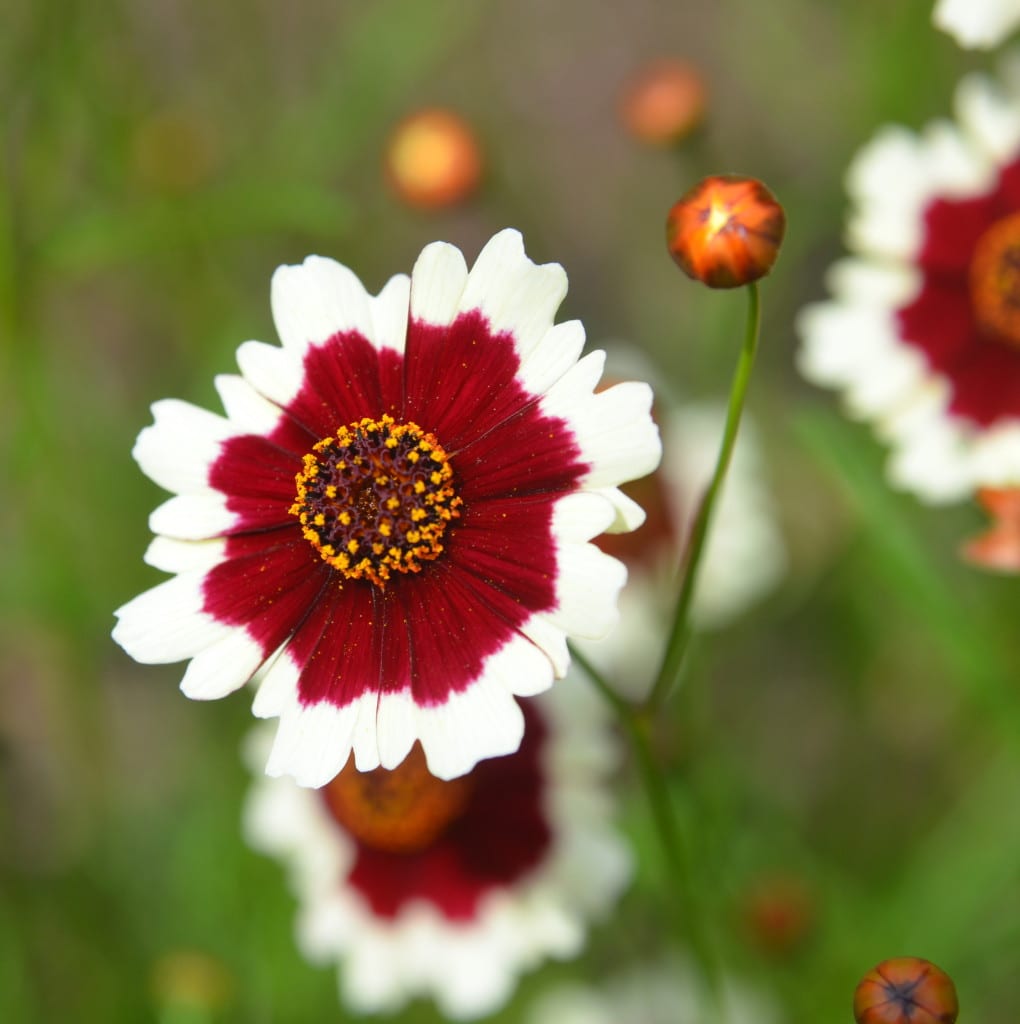 C. ‘Jive’ was one of five annual cultivars that stood out in the trial.

In addition to evaluating perennial coreopsis, Mt. Cuba Center also tested 27 cultivars of annual coreopsis. These plants represent a relatively new category of tickseed created from the hybridization of Coreopsis tinctoria with other species like Coreopsis rosea to produce a variety of long-blooming summer annuals. Five cultivars stood out in our trial as the best selections currently available: ‘Jive,’ ‘Salsa,’ ‘Golden Dream,’ ‘RP #1’ (Little Penny), and ‘Pineapple Pie.’ 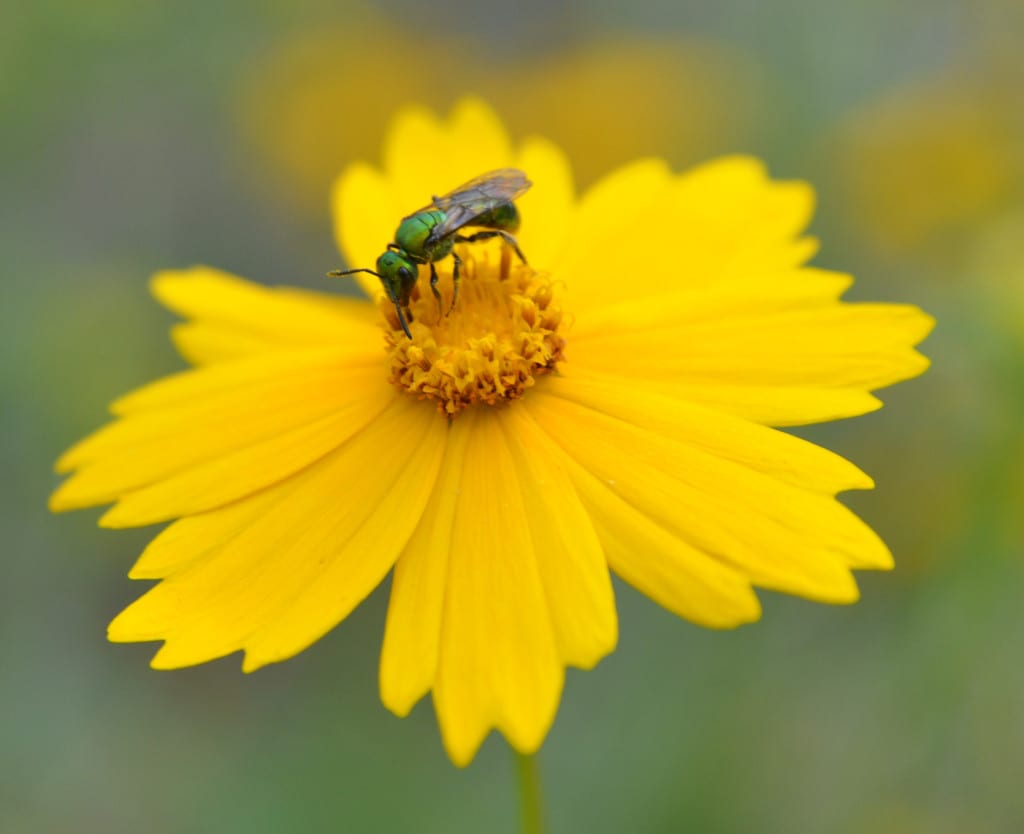 One of the things we are most proud of with this trial is the incorporation, for the first time, of an ecological component. Through a partnership with the University of Delaware, researchers are studying how differences among species and cultivars of coreopsis affect the pollinators that visit them. Although the project is still ongoing, we have already learned that coreopsis support a diverse array of pollinators- at least 42 different types, with different species and cultivars attracting different pollinator communities. The researchers hope to determine how characteristics like flower morphology and pollen nutrition work to attract the various insect. Scientists will continue to study these plants through 2016 with results to follow shortly thereafter. 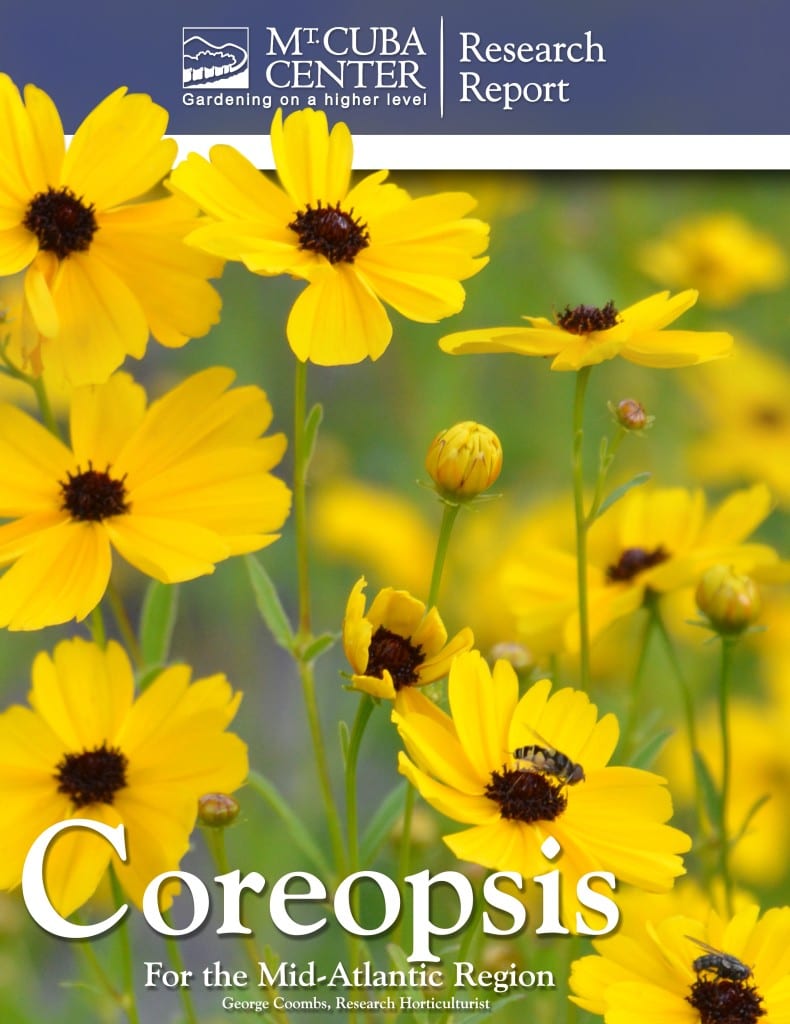 The complete report, Coreopsis for the Mid-Atlantic Region, as well as data from other evaluations on Heuchera, Baptisia, Monarda and Phlox can be found at www.mtcubacenter.org.

George Coombs is the Research Horticulturist at Mt. Cuba Center, a public garden located near Wilmington, Delaware that specializes in plants native to the eastern United States. George is responsible for the native plant evaluation program as well as evaluating plants for introduction to the trade. To date, he has authored trial garden research reports on Coreopsis and Heuchera with another report on Baptisia being published later this year. Prior to joining Mt. Cuba Center, George worked in the nursery industry at both the wholesale and retail level.