By ecopro on February 15, 2011 in Featured Members, Rainwater Harvesting

Water is one of nature’s most abundant resources with over two-thirds of the globe covered in blue. Fresh water, however, has become an increasingly precious resource. In arid parts of the globe, fresh water falling as rain has been valued and saved for centuries. And now, traditionally water rich areas, such as New England, are feeling pressure on their water sources, due primarily to increased lawn and landscape irrigation.

One of ELA’s newest members, The Great American Rain Barrel Company, located in Hyde Park, MA, started with the goal of creating a sustainable means for harvesting and collecting water for use in the landscape. They will be talking about rain water collection and exhibiting their products at the ELA Conference & Eco-Marketplace in Springfield on March 3.

ELA: What prompted you to get started in the rain barrel business?

Great American Rain Barrel Company: Thank you for asking. We are proud of our roots in rain barrels which happen to go way back to 1989 just after my husband and I bought a food importing and packing company in East Boston. We import specialty food items from the Mediterranean in huge drums. We had just bought the business when two school teachers came to us and said they were interested in using our drums to make rain barrels modeled after those they had seen in English Gardens. Of course, we thought what a great idea and were delighted they liked our barrel. 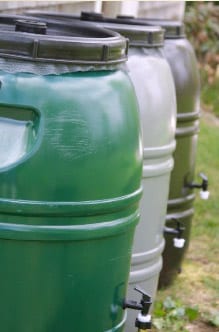 The two teachers developed a nice mail-order business, but after a few years they grew weary and came to us and asked if we wanted to buy it. It was kind of a no-brainer. We liked reusing the barrels, which could otherwise end up in landfills, and we had a big facility and distribution center so it was a nice fit with our food packing business. Thru the 90s we enjoyed a steady mail-order business recycling about 3000 shipping drums a year. When 2000 came with the Y2K panic, sales suddenly went through the roof. But the real shift came after 9/11 when people became more conscious of the environment and were finding ways to change things. This movement was fuelled even further when Al Gore published his book An Inconvenient Truth, and the green movement started to take over.

ELA: Many towns have offered rain barrels to residents at a reduced rate to reduce summer use of municipal water and to reduce the flow of contaminated water pouring down driveways and into rivers and streams. Are you involved in any community based initiatives?

GARBC: Absolutely! We have been a large player in community driven programs all over the country, with some of our earliest programs going back to around 2000 with some local Massachusetts towns. Our biggest municipal groups tend to be the Watershed groups that are trying to prevent storm water runoff that suffocates the rivers and streams such Riveraction in Davenport, Iowa and Buffalo Niagara Riverkeeper who sell thousands of barrels each year – but we have been awarded contracts throughout the country ranging in size from 20 to 3000. These programs are a great way to bring rain barrels to residents at discounted prices. 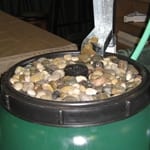 ELA: Who tends to install rain barrels? Do you have a typical client profile?

GARBC: This is a residential item, so it is a homeowner who buys and installs it. The homeowner is typically a gardener or someone who uses water outdoors or has concerns about water collecting around the foundation of their home. Other people come to us with specific uses as well, like water for their chicken coop or for their horses. They are trying to capture some of the thousands of gallons of water that splashes off their roof in the summer months for free and to prevent runoff.

ELA: Many houses have a relatively small footprint. When is it “worth it” for the owner of a small home to install a rain barrel? How much water can the average homeowner expect to collect?

GARBC: Well let’s start by saying that it is worth it to the person who uses water outdoors. That means that you are watering plants, topping off a pool, washing windows and cars. What people do not realize is how much rain water a roof actually sees. In New England we typically get about 16 inches of rain for the extended summer months (May through September). The average roof in New England is about a 2400 square foot surface. If 1000 square feet of roof collects 600 gallons for every inch of rain that means the average roof sees 1440 gallons of water. If you get 16 inches of rain, that means 23,000 gallons of water splash off your roof. That is a lot of water and can go a long way toward saving money and helping a town manage its resources. One 60 gallon barrel will feed 100 square feet of garden about one inch of water a week. If you are using that rainwater and refilling your barrel, you may be able to collect about 1000 gallons a season per barrel. It generally takes about two seasons to pay for a barrel depending on the community and the cost for water and sewer

ELA: Do you need to have rain gutters in order to collect water? Are there other options? 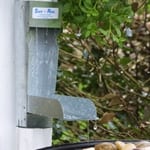 GARBC: Yes and no. Gutters certainly do the job best and barrels fill quickly. However, most structures have someplace where the water pours off in a concentrated way. You can simply dangle a chain from that point onto a barrel lid to collect the water.

ELA: You’ve probably seen some creative barrel installations. Could you describe some of those?

GARBC: Not only have we seen creative installations but we have also heard of some creative uses for water! The most interesting of course are the complex irrigation systems using our barrel. The most that I have seen in one application is 12 linked barrels for a plant garden. The barrels were stacked on stands to create pressure and put on timers in a greenhouse.

ELA: You will be exhibiting at the ELA Conference & Eco-Marketplace on March 3. What will visitors to your booth see?

GARBC: The Great American Rain Barrel and Save the Rain Diverter collecting water! We will have live demonstrations of our collection system. Stop by to see how easy it is to collect and save rain water.

Using a Biological and Ecological Compass to Solve Soil Problems
Invasive Species: Some Science and Some Questions