By i.am.georgia.harris on February 15, 2022 in Book and DVD Reviews, Resources

By Lauren Brown and Ted Elliman

The following excerpt is adapted from Lauren Brown and Ted Elliman’s book Grasses, Sedges, Rushes: An Identification Guide (Yale University Press August 2020) and is reprinted with permission from the publisher and the authors. 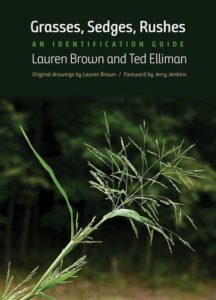 Grasses are everywhere. They cover vast areas of the earth, yet they also grow out of the cracks of city sidewalks. There are few places in the United States where you can walk a short distance without coming across a grass.

Yet few people – even those who are passionately interested in nature – take the trouble to learn the names of grasses. Enthusiast who will travel hundreds of miles to look at “wildflowers” ignore the grasses in their own backyard (even though these are technically also wildflowers). Most popular wildflower guides –  even the most comprehensive – do not include any grasses.

Here are but a few types of grasses, sedges, and rushes to whet your appetite to discover the wonders of these plant species. 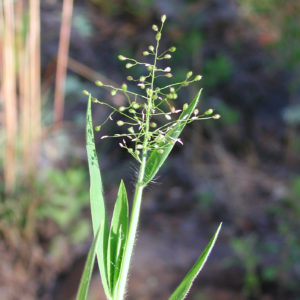 With a preference for sunny and fairly dry conditions, hairy rosette-panicgrass commonly grows in fields, rock outcrops, and open woodlands.  As one of the members of the “rosette-panicgrasses”, it has two distinct phases during the growing season: a vernal phase, and an autumnal phase. In the vernal, early-season phase, it is erect, with a pyramidal inflorescence of many oval to rounded spikelets at the top of the stem. In the later season autumnal phase (which may begin as early as mid-summer), the plant becomes very leafy, tends to sprawl, and the spikelets, rather than being visible, are often enclosed within the sheaths of the leaves. Hairy rosette-panicgrass grows 1 – 2 feet tall and is further distinguished by having small rosettes of basal leaves which persist over the winter. 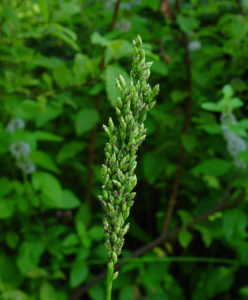 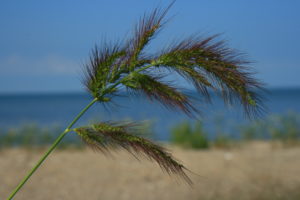 In New England, coast barnyard grass is primarily a species of coastal areas, inhabiting salt and brackish marshes as well as open freshwater wetlands. With its long, arching, purplish-green, and spikily-awned inflorescence, considerable height (up to 8 feet tall), and large leaves with densely hairy sheaths, it is a very conspicuous and recognizable grass. This species has a vast natural range that extends from Quebec to Guatemala. In New England, there are two look-a-like, freshwater wetland barnyard grasses (Echinochloa crus-galli and E. muricata) which may be distinguished from Coast Barnyard grass by their shorter awns and lack of hairs on the leaf sheaths. 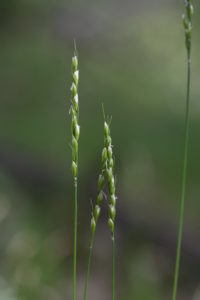 Roughleaf ricegrass is a forest species, inhabiting deciduous and mixed deciduous-coniferous upland woods throughout New England.  Growing 1– 2 ½ feet in height and coming into flower in early to mid-spring, its erect form is distinctive, with its narrow, upright inflorescence of awned spikelets closely hugging the stem. Its leaves, which are arranged in a basal clump, are narrow, dark green, roughened, and persistent through the winter. Roughleaf ricegrass is sometimes called white-grained ricegrass since the grains that develop from the flowers are white in color.  This feature helps to distinguish it from the similar mountain ricegrass (Piptanthera racemosa), whose ripened grains are black. 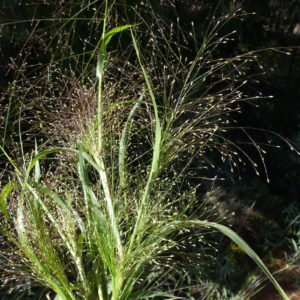 Old witch grass is an annual, late-season grass that grows in fields, thickets, and roadsides.  This native, widely distributed grass is often considered weedy, being an intruder in gardens and croplands, It grows to 2 ½ feet in height, most of which is occupied by its tall, wide-spreading inflorescences, which are composed of multiple, forking branchlets, each with small, oval spikelets at their tips. When the grains have ripened in late summer and early fall, the inflorescences break off from the stem and disperse like tumbleweeds. Old witch grass leaves are long and wide, and its stems are densely hairy. 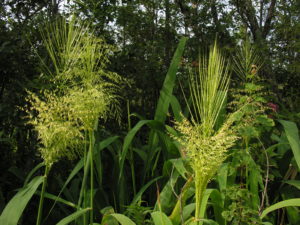 Once considered a single species, North American wild rice has recently been classified as two species: northern and southern wild rice. The two species are very similar, and to a large extent their ranges and habitats overlap: the differences are primarily in the shape of their inflorescences. The wild rices are an annual grass, growing as much as ten feet tall, inhabiting lake, pond, river, and estuary shallows in both freshwater and brackish conditions. Unlike the other grasses discussed here, wild rice has separate male and female flowers: the female flowers, which form the rice grains, are on erect or ascending branches at the top of the stem, while the more horizontally-branching male flowers are immediately below the female flowers. In northern wide rice, the female inflorescence branches form a tight, upright cluster, while in southern wild rice (as in the image here) the female flower branches diverge in the shape of a fan. The center of traditional wild rice harvesting is in northern Minnesota, where, to this day, Ojibwe harvesters maintain the centuries-old practice of wild rice harvest by pole and canoe. 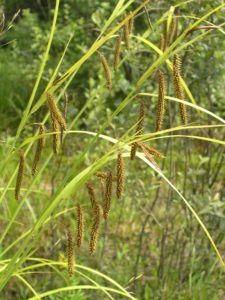 Often reaching heights of 4 – 5 feet, fringed sedge is one of the tallest species within the Carex genus, of which there are about 190 species in New England.  It is a particularly elegant Carex sedge, with slender, clumped stems, long leaves, and drooping golden-brown flower spikes up to four inches in length. An inhabitant of swamps, marshes, and wet meadows, fringed sedge is very common throughout New England.  Like other Carex sedges, fringed sedge has separate male and female flowers; the male (staminate) flower spikes are positioned just above the female (carpellate) spikes—they are narrower and less conspicuous than the female spikes, which are composed of scores of tightly packed, awned flower sacs (perigynia), each of which encloses a single, tiny flower which develops into a hardened, seed-like achene. 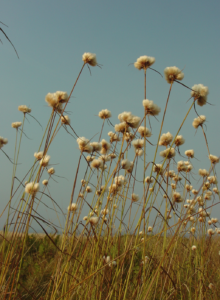 Tawny cottongrass, which is actually a sedge, is one of six Eriophorum sedges in New England. These plants are distinguished by their cottonball-like inflorescences, which make them such a conspicuous and attractive sight in open peatlands. Tawny cottongrass is the most widespread cottongrass in the region, growing in bogs, fens, and even ditches and swales with a peaty, acidic substrate. It grows up to four feet in height, with a few narrow leaves on the stem, and a long leafy bract immediately under the inflorescence. The “cotton” at the top of the stem is composed of silken, thread-like bristles that surround each small achene; as with milkweeds, these silken hairs enable the seeds to be carried and dispersed by wind. Tawny cottongrass is distinguished by the presence of yellowish hairs among the white; the inflorescences of the other cotton grasses appear purely white. 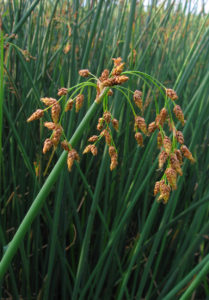 Formerly classified as Scirpus validus, soft-stemmed bulrush is an eye-catching sedge, often growing six to eight feet tall, with a bluish-green stem and an inflorescence of bristly, reddish-brown flower clusters drooping from the top of the plant.  Growing throughout New England in lake, river, and estuary shallows and in both freshwater and brackish marshes, sometimes in large populations, it is distinguished from the very similar hard-stemmed bulrush (Schoneoplectus acutus) by the spongy softness of the stem. Unlike most sedges, which have angular stems, this species has a round stem. Ducks and geese eat the seeds of soft-stemmed bulrush and muskrats feed on its stem and roots. 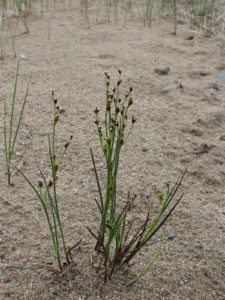 Although it is commonly referred to as “black grass,” this salt marsh species is a member of the rush family. It is a common and distinctive plant in salt marshes all along the New England coastline, growing in clumps and often occurring with salt marsh grasses such as smooth cordgrass (Spartina alterniflora), salt marsh hay (Spartina patens), and spike grass (Distichlis spicata). It is typically 1-2 feet in height, with short-branched, forking clusters of small, dark flowers. These flowers consist of six sharp-pointed tepals (three petals and three sepals), brown to black in color, surrounding a cylindrical ovary. After fertilization, the ovary develops into a dark brown capsule enclosing many tiny seeds that are dispersed by the wind.  Occasionally, black grass is found growing along salted highways far from the coastline.

Lauren Brown is a botanist whose previous books include Grasses: An Identification Guide, Weeds in Winter, and Grasslands.

Ted Elliman worked for many for the Native Plant Trust (formerly New England Wildflower Society)  and is the author of Wildflowers of New England (Timber Press 2016).