As urbanization grows, the value of public open spaces becomes more vital. The City of San Francisco contains more than 1,500 vacant lots that total an area approximately half the size of Golden Gate Park. Social and biotic values of these scattered and down-trodden sites are underutilized, leaving voids in underserved communities. 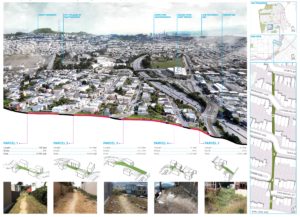 Three different conditions generally characterize these lots: they are relatively small, oddly shaped, and in “wrong” locations. Such conditions often limit the potential for the development of these vacant lands. These remnant lots tend to be concentrated in lower-income neighborhoods with higher crime rates and in areas most in need of a safe and healthy environmental improvement.

Vacant lands, in general, carry a negative connotation – void, blight, abandoned – and in some cases, destroyers of the community. Due to a gap between community, ownership, and a space no one cares to manage, these lots often have a negative impact within a community. 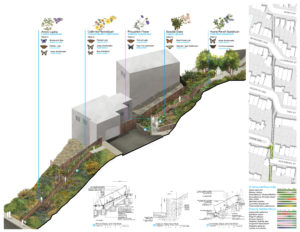 The planting palette for each parcel responds to site-specific characteristics and reacts to topography, sun exposure, and soil conditions. Each parcel incorporates annuals and perennials that provide seasonal beauty and support pollinator habitats.

However, vacant lands can also be appreciated for what already thrives there. Due to lack of maintenance, oftentimes vacant lands symbolize a sort of wilderness and host a surprising amount of wildlife in the urban setting. Urban conditions cause habitats to become unbalanced and fragmented. These lots are often dominated by a resilient mix of opportunistic exotic species and the hardiest natives, which provide a refuge for small mammals, insects, and birds. These patches of diverse ecologies can also contribute to the overall connectivity within the larger ecosystem by providing stepping-stones for different species to travel between local habitats. The indigenous flora and fauna that occupy these un-manicured spaces are assets to the community and can promote an identity, spiritual attachment and a recreational experience for the users. 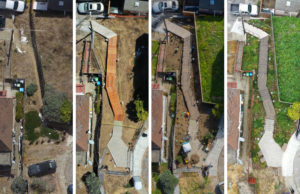 Ridge Lane parcel 4 before, during, and after construction.

Vacant lands have the potential to serve as a public space and can make a significant contribution to social engagement. Community members often take charge of these vacant lots and activate them through community gardening, guerrilla gardening, and other artful representations. These investments from the community are the starting points to resuscitate marginalized spaces and establish identity, visibility, and pride.

Located in the Ingleside neighborhood of San Francisco, Ridge Lane is a vacant public right of way owned by the city. The site is 15-feet wide and approximately a quarter mile in length. It is composed of five individual parcels separated by city streets. 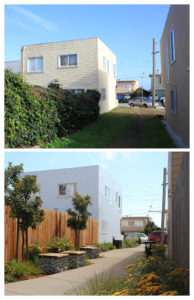 Ridge Lane parcel 1 before and after construction.

Ridge Lane is a result of the convergent growth between two separately coordinated housing developments. It was originally plotted out as a street, but due to its insufficient width of 15 feet and steep slope, it remained vacant for almost a century.

Over the years, Ridge Lane was considered a “no man’s land” due to a lack of community and city investment. The prevalence of crimes such as robbery, loitering, assault, and frequent dumping of garbage perpetuated Ridge Lane’s undesirable status. 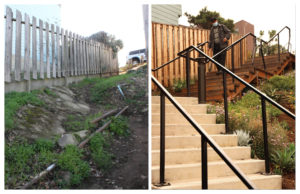 Ridge Lane parcel 4 before and after construction.

However, this vacant space has served as an informal path providing a convenient yet hazardous shortcut for the residents to navigate within the neighborhood and to access local transit hubs. A trail of trampled plants, exposed rocks, and loose soil is a testament to the need for a safe and convenient path through the neighborhood.

Motivated by the idea that comprehensive design and management can reduce crime and improve neighborhood life, a core group of committed community members formed a non-profit called Ridge Lane Neighbors (RLN) in 2012. 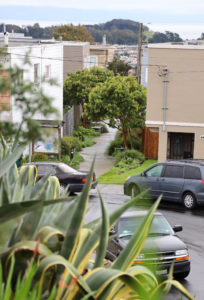 The patches of diverse ecologies can contribute to the overall connectivity within the larger ecosystem by providing a stepping-stone for different species to travel between local patches of habitat.

The revitalization of Ridge Lane is a grassroots effort that integrated the community within the design process. This involved regular, monthly meetings and workshops to ensure that all voices and concerns were heard and addressed. 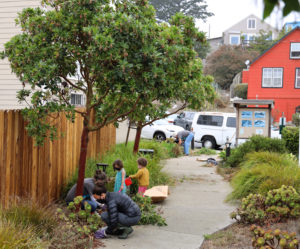 Neighborhood friends and family are regularly involved in planting and clean-up days.

At each meeting, neighbors discussed different topics, from site elements to bigger issues. Their shared goal was to create a pleasing and comfortable space that would represent the soul of Ridge Lane while instilling a sense of pride within the neighborhood. Design charrettes were conducted in order to involve the community in the design process, instill a sense of ownership, and identify a shared value the neighbors have for the space.

Ridge Lane’s geography and sheltered southern exposure make it a unique and valuable location for a butterfly mating behavior called “hill-topping.” Hill-topping is a mating ritual in which butterflies congregate at the highest point of their local habitat to find a proper mate. Despite extensive urban development and habitat destruction, this area has retained a diverse and healthy population of butterflies throughout the years. The presence of this butterfly habitat is a uniting element and subject of passion amongst the neighbors and was a guiding principle when developing the design. 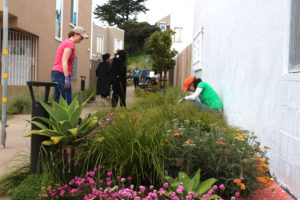 Thanks to community investment and dedication, this blighted lot now serves as a vibrant linear park that instills a sense of identity and neighborhood pride.

The design layout of Ridge Lane is an abstraction of venation structure in butterfly wings. This speaks to the ecological value of the site as a butterfly and pollinator habitat as well as establishing a unique neighborhood identity. In addition to its symbolic value, this pattern provides varying pockets of space while maintaining a straight line of sight and movement through the parcel, making it safer and easier to navigate. The existing exposed bedrock was preserved and incorporated in the design to celebrate the geological character of the site. Recycled concrete and rock debris were repurposed as fill within gabion benches.

Due to the project being publicly owned and funded, the construction is being phased per each of the five parcels. The first phase was Parcel 1 at the highest elevation. Due to its relatively flat condition, it provided the opportunity to serve as a common gathering space for neighborhood activities while also serving as a pilot project for the remaining parcels. The project’s second phase was Parcel 4, which was the most hazardous and treacherous site due to its steep slope and erosion. The remaining parcels are scheduled to be built once funding is available.

Both completed parcels have become integral and impactful assets within the neighborhood, where neighbors of all ages and backgrounds come together on occasion and on a daily basis while commuting.

Based on the existing butterflies observed and potential additional species, a plant palette was created to nourish and strengthen their population. Butterflies typically need more than one plant type to complete their life cycles. Most butterflies are flexible with their nectar source and can feed on a variety of different flowering plants. However, many butterflies require specific host plants to feed their caterpillar larva stage. With this in mind, a palette of native plants and well-adapted non-natives was created to provide a combination of ecological value as a butterfly habitat as well as year-round seasonal beauty for the overall master plan of Ridge Lane. 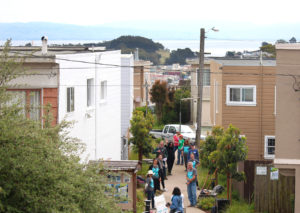 Planting days and butterfly workshops are held regularly as a part of the maintenance and upkeep of Ridge Lane’s valuable habitat. These activities improve the Lane and educate neighbors about the local ecosystem. During these activities, Ridge Lane served as a case study to introduce the importance of both host and nectar plants in a butterfly garden. Neighbors learned the principles applied on Ridge Lane and how to utilize them in their own backyards to enhance the overall neighborhood habitat.

The two California pipevines planted on Ridge Lane have inspired many of the neighbors to plant this California native in their own backyards to expand the lost habitat of this beautiful blue butterfly.

Ridge Lane may not fix the devastating loss of habitat. Still, it can certainly serve as a catalyst for the thousands of other vacant lots and backyards to become an improved piece of the patchwork ecology that makes up our cities. 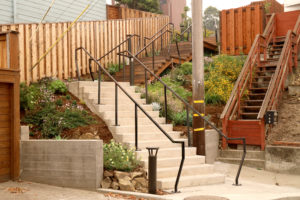 The rocky characteristic of the site is preserved with the use of floating wooden decking with a minimal structural footprint.

Nahal Sohbati is a landscape designer and a co-founder of Topophyla Landscape Design in Santa Barbara. After earning her bachelor’s degree in interior architecture, Nahal developed a passion for public open spaces with high social and environmental impact, which led her to pursue a master’s in landscape architecture. Nahal strongly believes that design is an advocacy tool to change “what is” into “what could be.” Since her award-winning community service project, Ridge Lane, Nahal has made it her goal to contribute design services that form lasting bonds between communities and their environment.