By Maureen Sundberg on February 16, 2015 in Trees, Urban Landscaping

New York City is on the verge of completing a major tree planting project through its MillionTreesNYC initiative. It is expected that by the fall of 2015 one million trees will have been planted throughout all of New York City over the course of seven years. MillionTreesNYC was announced in the fall of 2007, and the City’s tree planting program quickly expanded. This led to many opportunities and challenges, including working with new contractors, training a new staff of foresters, and developing a platinum level customer service program to align with additional planting. Additionally, we asked, “Where will all of the trees come from?”

Prior to the initiation of the million tree planting goal, New York City Department of Parks & Recreation (NYCDPR) procured all the street trees through contractors who did the planting. Working through these intermediaries, NYCDPR got all of the trees from ten to fifteen nurseries within 100 miles of the City. However, we determined that this supply system was not going to meet NYCDPR’s future demand during MillionTrees, and it had been speckled with a variety of difficulties.

First and foremost, NYCDPR was not in direct control of the quality of trees, as they were sourced out by contractors. Second, because there were many nurseries from which trees were being purchased, there were tree quality, pruning, and root ball size inconsistencies. Third, there were many species NYCDPR foresters specified that were unavailable or available in short supply. This shortage ultimately led to significant substitutions for individual planting sites. Finally, many species that were available were not being grown to the specifications that were most compatible for New York City’s infrastructure. At the forefront of that list was the need for all trees to be limbed to a minimum of five feet. 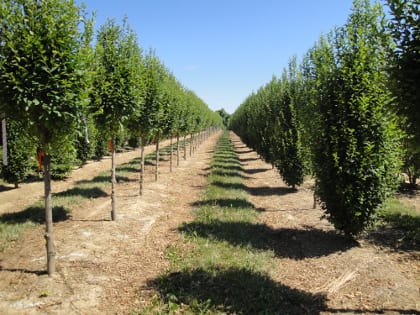 Tree growing contracts have allowed NYCDPR to get trees such as these Carpinus betulus pruned to specific street tree standards.

NYCDPR needed a way of obtaining large quantities of trees that were grown to very specific standards and were of a consistent high quality. We brainstormed many potential solutions, including contractual changes to the possibility of growing the trees in-house, but only one option seemed to be cost effective and realistic in such a short time frame: contractual relationships with nurseries. The City would create long-term contracts with nurseries to grow desired species of trees to very exacting standards. After a long and fairly complicated process of navigating through NYC government bureaucracy, tree procurement contracts were created.

Once the contract was created, the next step was getting nurserypersons interested in becoming part of this business arrangement. We cold-called nurseries and visited trade shows to advertise this opportunity, but letting nurseries know the City wanted to purchase a large quantity of trees a year was the easy part. The real challenge was to keep nurserypersons interested once they saw a hundred page document with terms like “upon request,” “chief contracting officer,” and “contract default.” Fast forward a few months and NYCDPR ended up with fantastic nurseries that are very well qualified to meet our current and future needs.

The contracts were originally nine year-long contracts. The contract indicates that NYCDPR will purchase a minimum number of trees each year but has the right to purchase more assuming the trees are readily available and meet specifications. If for any reason NYCDPR does not purchase the minimum number of trees, the nursery is able to collect compensation equal to five percent of their bid price per tree for each tree not purchased, provided it met specifications. 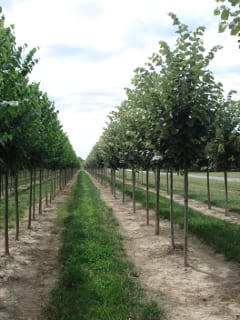 Trees in this row of Silver Lindens (Tilia tomentosa) have been grown to NYC’s strict quality standards.

The minimum number of trees each nursery is required to supply varies, but the minimum that Parks would guarantee to purchase was given careful consideration and is less than NYCDPR’s anticipated usage (to act as a buffer in the unpredictable world of annual government fiscal allocation). Before any nursery was awarded a contract, each had to pass a stringent weeklong test to confirm the following:

The contract requires NYCDPR personnel to tag all trees while they are in the ground. Each nursery is required to pay for NYCDPR personnel’s transport and accommodations during tagging. (This cost was to be worked into their bid price per tree.) Based on experience, NYCDPR knew that no single nursery had all of the trees at the quantities that the City desired. Therefore, each nursery was able to subcontract up to sixty percent of trees for the first three years and only up to twenty percent for each year after.

Each nursery is required to submit an annual work plan that summarizes the inventory of trees they have growing for NYCDPR and shows the year they are expected to be harvested. This annual plan is checked at least once a year by NYCDPR. 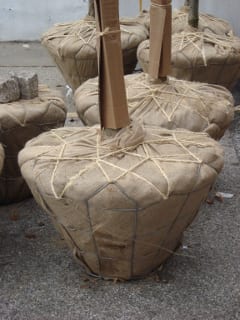 Finally, all growing and shipping standards were specified in the contract, including how long each tree should be grown before being harvested, pruning requirements, branching height, and root ball sizes. Particular attention was paid to pruning requirements to guard against over- or under-pruning.

The contracts have been in effect for close to six years, and a number of benefits have arisen. The single greatest benefit is that NYCDPR now has a steady supply of an amazingly wide diversity of trees that are being grown to the highest industry quality standards. At a time when there is currently a dire shortage of trees in the nursery industry this has proven to be a great tool in locking in NYCDPR’s supply of trees. The second benefit is the information NYCDPR now has: For the first time ever, NYCDPR knows in advance what quantity of every tree species is going to be available. There is also assurance that the same list of plants will be readily available until the contract expires in 2017. Therefore, NYCDPR is better able to plan and allocate resources so that planting plans do not have to be revised or substitutions made, saving a great deal of time. This also ensures that each plant specified is truly the right plant for the right location. In addition, NYCDPR now has a direct conduit into three impressive nurseries with a wealth of knowledge of street trees.

There have been many benefits that have arisen from the creation of this formal relationship. For example, it is expected that by next fall NYCDPR will be planting approximately 400-500 goldenrain trees (Koelreuteria paniculata) a year. This tree formerly was planted at a rate of no more than fifty a year due to low availability.

Establishing these contracts has been a challenging process with many detours along the way, but the benefits are clear. From our experience thus far, it is clear the nursery industry is open to developing relationships with municipalities as long as the relationships are built on fair and reasonable terms that allow each party to prosper. New York City is proof that such a relationship can be successful.

Matthew Stephens is Director of Tree Planting for New York City Parks and Recreation. He has worked at New York City Parks for eight years where he currently leads the tree planting program, a citywide initiative to green the streets. He has worked to increase the overall efficiency of the tree planting program, implemented a platinum level customer service program, and led the development of the Parks’ innovative tree procurement program. Mr. Stephens received a BS in Horticulture from Illinois State University and a MS in Public Horticulture from the University of Delaware in the Longwood Graduate Program. For more information, feel free to contact Matthew Stephens at matthew.stephens@parks.nyc.gov.

Planting Plugs: Putting Tools to the Test
From Nursery to Garden: Establishing Plants in the Landscape