By ecopro on February 15, 2011 in Landscape Design

I had dinner with an artist friend years ago and, still chatting in the parking lot of a favorite restaurant, the conversation turned to the difference between an artist’s eye and the rest of us. I’d long thought that artists simply had different output; they saw what we saw but in their brain, or through the magic of their talent, the sight seen was magnified or expanded, altered in ways that seemed almost magic. My friend looked back at the window and said, “What do you see?” “I see the shadow of the kitchen door,” I replied, “and the soffit over the bar. What do you see?” “I see a triangle there,” as he pointed, “and a rectangle over there.” It was the first time I understood that the critical difference was not so much output as input, that artists were first and foremost keen observers. 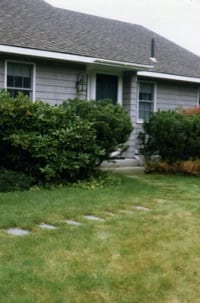 The original owner of this property imposed a landscape design that featured Mugo pine and every kind of juniper imaginable, none of which was compatible with either the site or the locale.

My approach to land design is rooted in Taoism overlaid with a good dose of Yankee practicality and an abiding love of the Maine landscape, but it is first and foremost the art of observation. I have learned how to see what is truly there and to count those bits of spatial information as the tools of design. It is also born of the idea that land design is sculptural, that the established painterly approach is missing an entire dimension and missing out on a level of intimacy that only comes from being within the volume of the property.

This is, I think, a natural outgrowth of my belief that there is no such thing as a blank slate. Every property, even the flattest city lot, is doing something, botanically, topographically, architecturally. It has geographic orientation, which means the sun takes a certain pathway over it; that goes for water, too, and wind. It has a relationship to its neighbors, to their topography, botany and architecture. It also has region, a setting which imparts character and a distinctive sense of place. That sense is why a beach cottage in Maine is different from a beach cottage in Maryland, and design should reflect that. 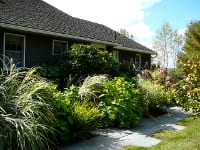 The new owner committed to a long process of restoration, one result of which is the new front landscape pictured here. Cues were taken from both the site, the bulk of which is a gorgeous wet meadow, and the locale, which includes the 3000-acre Scarborough Marsh.

All of the above are elements of habit, the horticultural kind; they all express, or imply, some sort of form. If I reference those forms in my design, two things will happen. The first is that the property will have a sympathetic resonance; it will look and feel ‘right,’ natural, genuine or, the best compliment, as though it just happened like that. The second, and don’t tell anybody this, is that it’s actually less work because part of the design is done. These existing forms are my toys; they are the blocks with which I build the new environment, and some of them are already in place. They may not be the shapes or placements I’d have chosen, which is a constraint but not necessarily a limitation. They are the framework through which and around which I weave the complementary pieces, the counterpoints that allow the site to be fully expressed in the design.

Sites which are fully articulated are multi-layered in meaning as well as in design, and in that meaning lies the potential for lasting connection between person and place. This potential applies to the designer as well as to the inhabitant; as one who is always designing for others, the opportunity to have a meaningful experience on each and every property is invaluable. It allows me to expand as an artist, often beyond my comfort level and always into some aspect of unexplored territory. Every property is an artistic rush; every designer can take that ride by developing the habit of observation, and the observation of habit.

Lindsay Knapp is an artist, writer, Master Gardener and landscape designer whose landscapes can be seen throughout southern Maine. Her work has been featured on television and in print, and her articles have appeared in People, Places, Plants and Port City Life. She writes and designs from her home in Portland, ME and is currently at work on a book advocating a Taoist approach to land design.

On March 3, learn how to use site and locale as design tools in Knapp’s ELA Conference presentation, Redefining Habit. She may be reached at lindsay@designtosite.com.

Invasive Species: Some Science and Some Questions
No Curveballs at Seventeenth Conference & Eco-Marketplace