By Maureen Sundberg on February 15, 2018 in Landscape Design

It began with a walk through the woods in Western Massachusetts. It was the fall of 2002 at the UMass Amherst Department of Landscape Architecture and Regional Planning (LARP). We were first-year MLA students begrudgingly leaving the studio one afternoon to head out in the field with professor emeritus, Hal Mosher. Our department chair, Jack Ahern, had arranged for Hal to lead the lab portion of our Landscape Ecology class. So, off we went through the back country hills of the Pioneer Valley, in a caravan of beat up grad student vehicles with Hal Mosher at the helm with his walking stick. 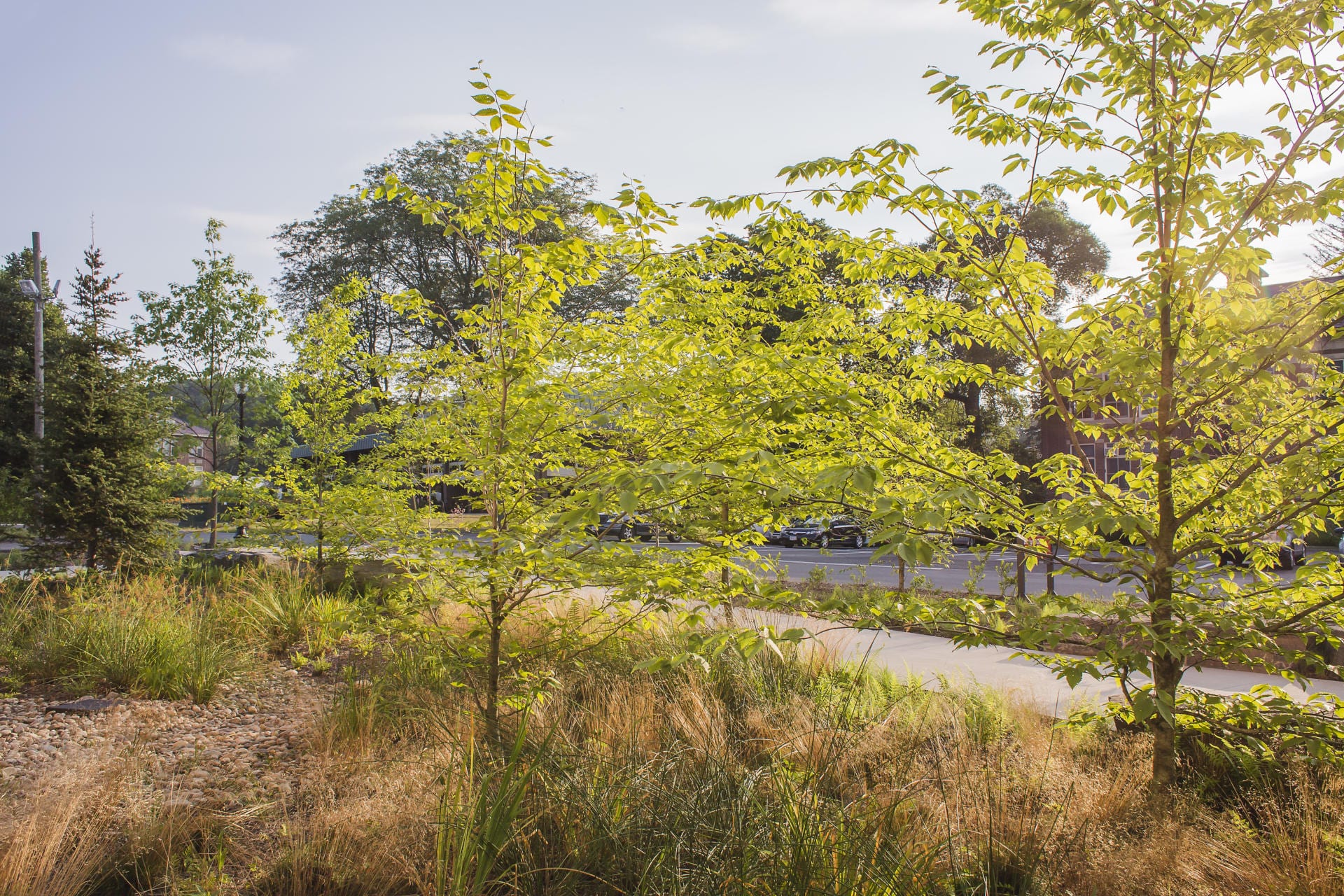 Understanding the ecology of local landscapes leads to better design. The East Entry Garden for the new Design Building at UMass Amherst consists of American Beech and Sheep Laurel, a nod to the nearby groves growing wild in the hills above this eastern part of the campus. Photo: Ngoc Doan

Let’s face it; in those early years of graduate school, it’s all about studio. Taking the time each week to go for a walk in the woods seemed inconvenient and irrelevant. And yet, years later, those walks were to become a constant reminder of what consistently informs my design thinking as a landscape architect in New England. Hal ended up being one of these men who, although quiet and thoughtful, was a bucketful of rare knowledge and a believer in the notion that the most important learning happens outside of the classroom. He knew things that most people, let alone landscape architects, don’t know or acknowledge nowadays. Such as, how to build a campfire with wet wood (why never to use Juniperus) or how to tell where North is on a rainy day by identifying the trees and understory. He inspired us to really see the landscape around us, to understand the interconnectedness between the history of the land, culture, and ecology.

Long before the notion of re-wilding the college campus or urban park came back into fashion, Hal was marching us through soggy wetlands and colonies of Vaccinium corymbosum and Sphagnum moss, through thickets of Sassafrass albidum and crushing the leaves to smells of Fruit Loops along the way. He took us on forgotten logging trails along steep north slopes through woodlands of Tsuga Canadensis, Fagus grandifolia, and Betula alleghaniensis, teaching us how to identify Wolley Adelgid and Birch Borer. We trekked down to the Connecticut River and sought out fossilized dinosaur footprints and to nearby sand pits to find armored mud balls from glacial Lake Hitchcock. We went off in search of colonial cellar holes and primitive caves that had become completely hidden by groves of Rhus typhina and Spirea latifolia. He showed us a ravine where the Pocumtuc Indians settled in the winter near the stands of Robinia pseudoacacia and brought us to the summit of Mount Holyoke where reindeer lichen clung to the rock next to tufts of Schizachyrium scoparium. Those field sessions soon became our respite every week. A break from the grind of studio and crits, we came to favor these hikes with Hal.

It was this time, outside of the studio, that gave me an awareness of how the familiar landscapes and their associated ecologies could give form and meaning to design of the land. I always had an appreciation and respect for the New England landscape where I was raised, but the MLA program at UMass LARP gave me the vocabulary to interpret and recognize that regionalism. When it comes to the design expression of materials and plants, can be fundamental to creating a true sense of place within a garden. 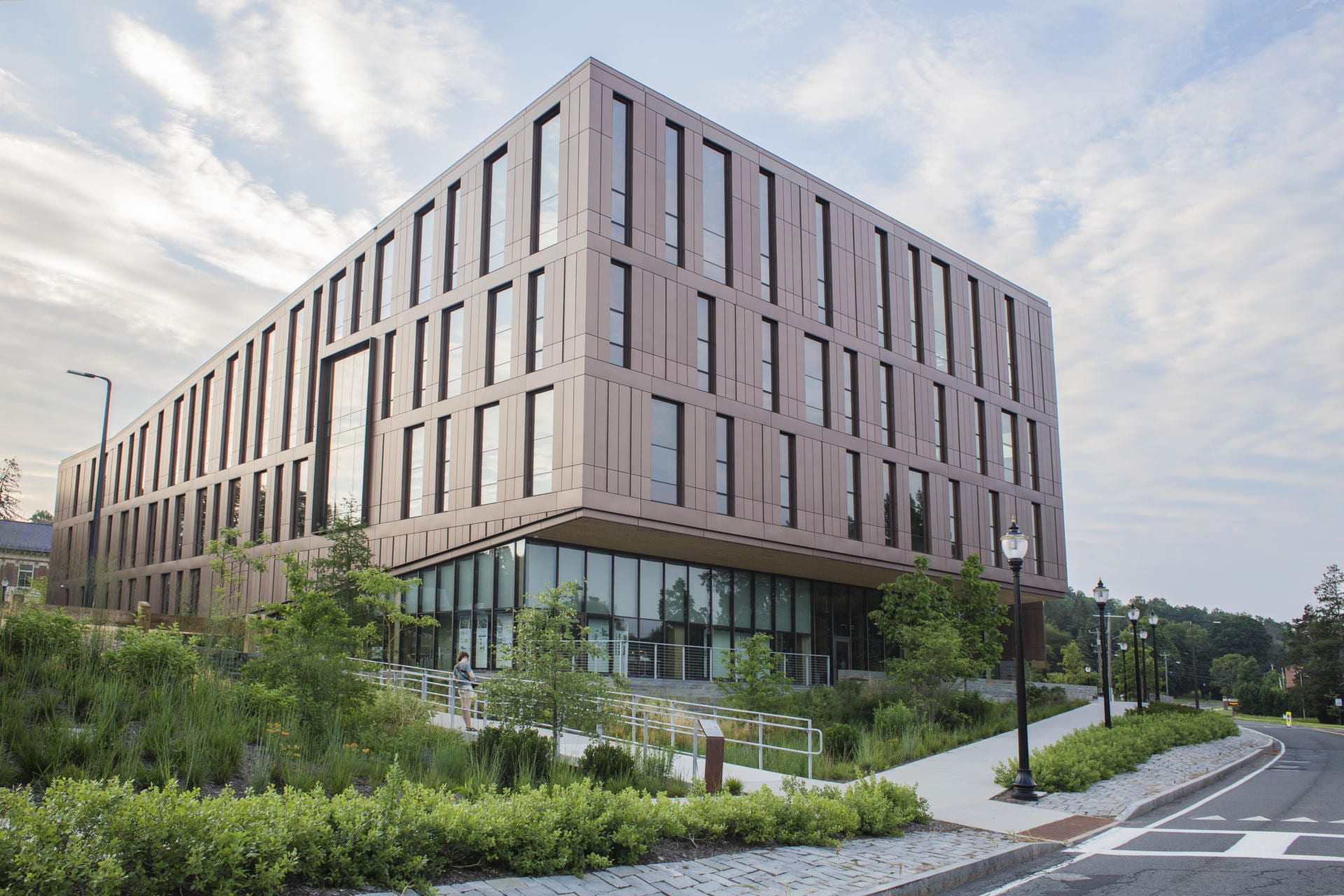 The Design Building is defined by a series of stormwater gardens along the west façade, capturing the site’s water and cleansing it with a palette of indigenous grasses, shrubs and stands of Tupelo and Sassafrass. Photo: Ngoc Doan

In 2013, Stephen Stimson Associates (SSA) began a collaboration with Leers Weinzapfel architects after being selected as the design team for the new integrated Design Building at UMass Amherst. The Departments of Architecture, Landscape Architecture and Regional Planning, and Building and Construction Technology were being combined under one roof for the first time – ever. It was an honor to work on a project for our alma mater. Six of us in the office were graduates of LARP and had weathered through the deteriorating inadequacies of Hills North. The site of the new building was raw: an existing Parking Lot, No. 62. During the early years of UMass, however, it had been the actual site of the horticultural plots for the Landscape Architecture Department, founded in 1903 – the second oldest landscape architecture program in the country after Harvard. Frank A. Waugh, the first Department Chair, performed years of horticultural experiments in these test plots. Somewhere between Frank Waugh’s planted experiments, Hal Mosher’s naturalist wisdom, and our firm’s penchant for craft and detailing in New England, the concept for the Integrated Design Building at UMass was born. 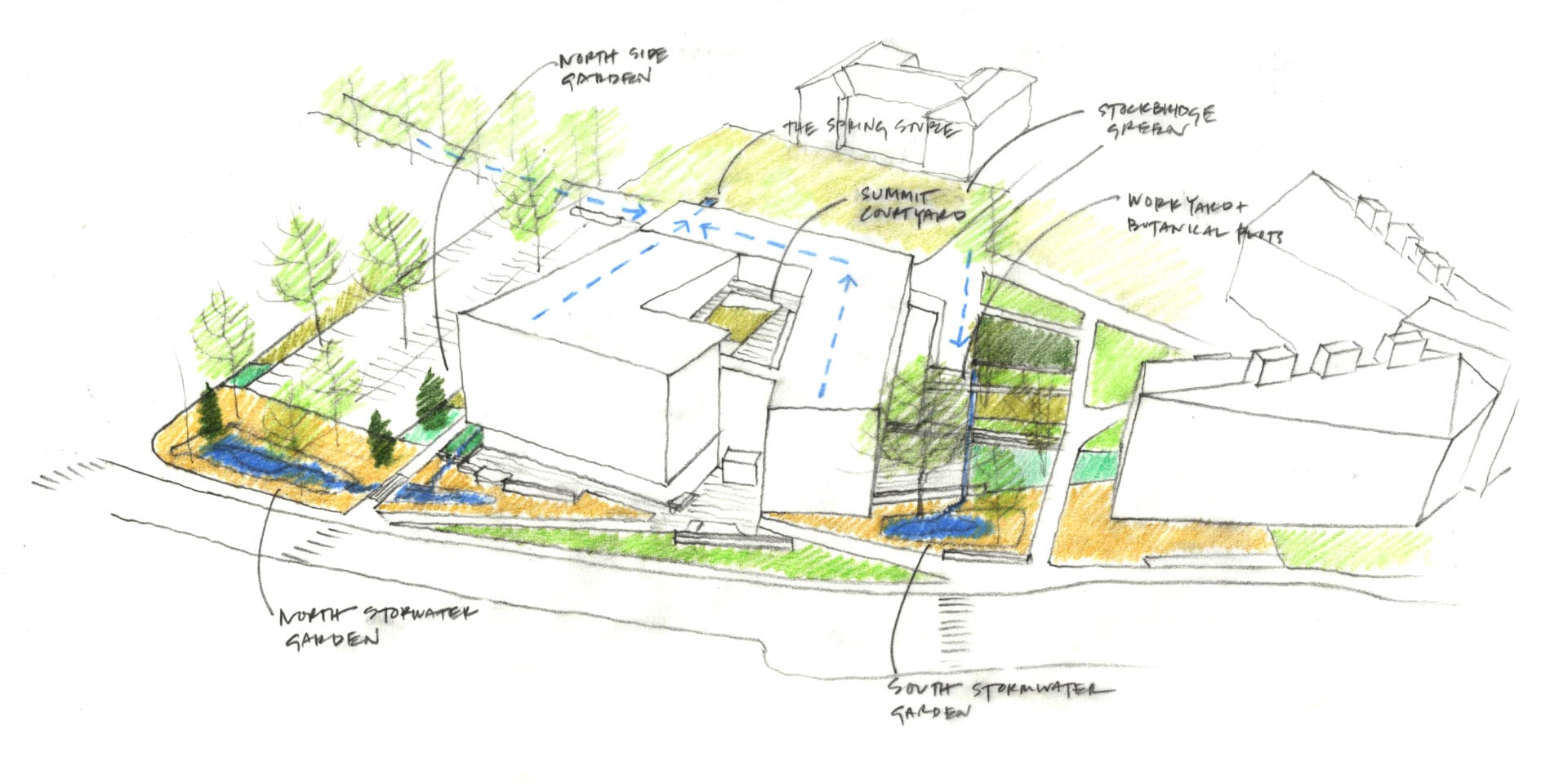 A conceptual sketch conveys how the integrated hydrology of the site and architecture interprets and adapts familiar ecologies of the region to the Design Building landscape. Concept Diagram by Lauren Stimson

The building and landscape were designed in unison. They have a responsiveness to each other, collaborating towards the common goal of making the working systems visible and uncomplicated. Conceptually, the building is a series of studios, labs, and offices on four levels surrounding a central, interior gallery of common space. Likewise, the landscape around the building is a collection of gardens represented by familiar and distinct regional ecosystems, each one with a particular function relating to the project’s infrastructure. Together, they form an outdoor classroom, a laboratory for learning, and a series of plant communities connected to one another by the site’s hydrology and the building’s topography. 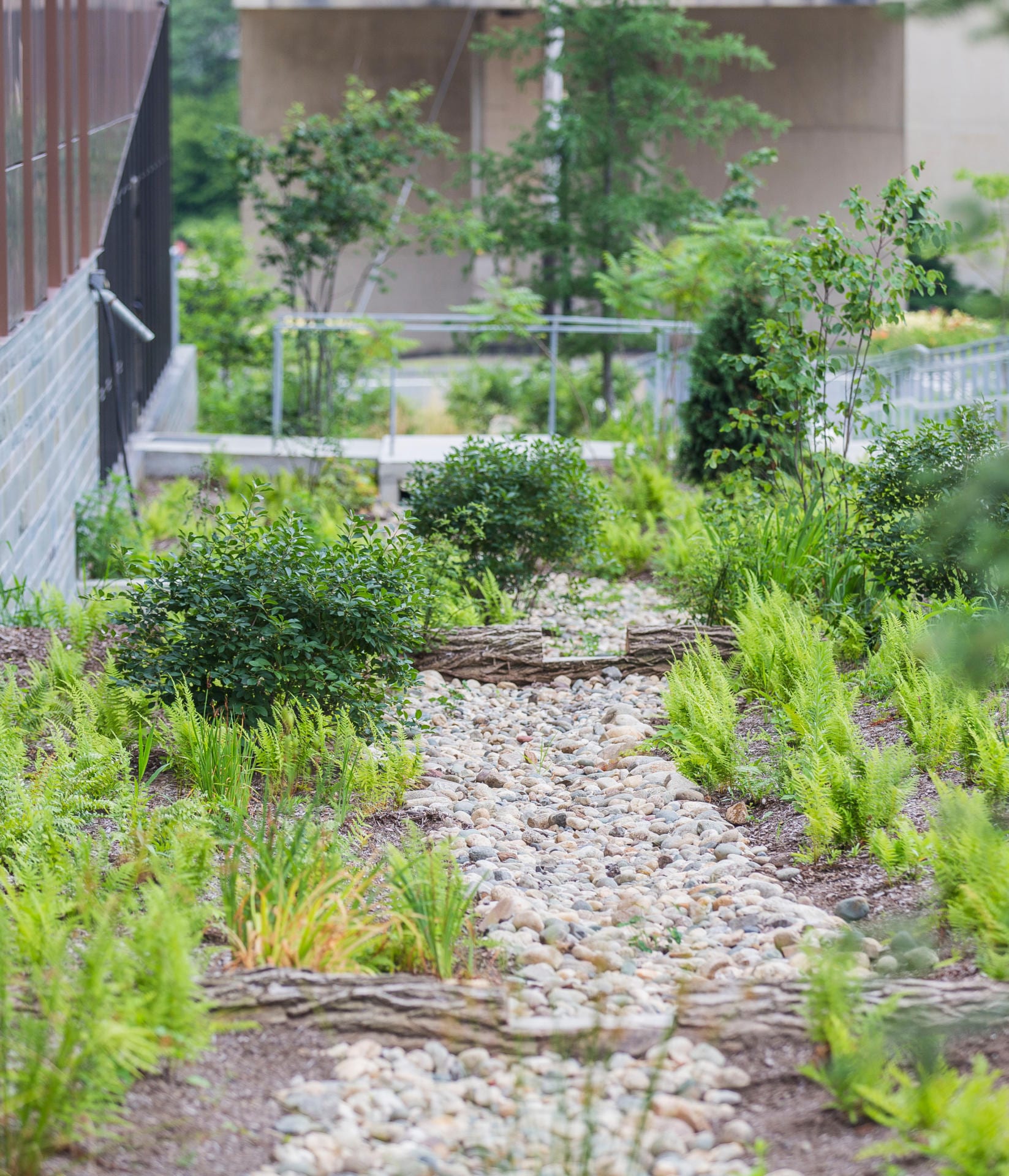 Once the stormwater from the rooftop and the eastern part of the site is collected in the Spring Source Garden, it flows along the North Slope Ravine Garden, through a series of black locust check dams and a collection of ferns and wetland plants. Photo: Ngoc Doan

A grove of Sassafrass albidum and Fagus grandifolia with Kalmia angustifolia underfoot define the east entry garden, reminiscent of the wooded slopes of Orchard Hill that rises above this eastern part of campus. A scupper from the building conveys water from the roof into a planted pre-treatment spring source garden. Water then flows during a hard rain into the northern slope ravine garden where conventional catch basins and pipes were eliminated in favor of a visible system of Robinia pseudoacacia check dams and diversely planted forebays with species like Larix laricina, Matteuccia struthiopteris, Symplocarpus foetidus, and Caltha palustris. At the southern side, a Carya ovata grove gives shade to the outdoor workyard where students and faculty projects are constantly changing with the seasons and semesters. Eventually, the runoff from both sides makes its way through stands of Ilex verticillata and Salix discolor into the western stormwater gardens, picking up water from adjacent sites along the way. These stormwater gardens mimic the planting of the Connecticut River’s intervale meadows with grasses and wetland perennials giving a wilder expression to the western façade of the highly public North Pleasant Street entry. 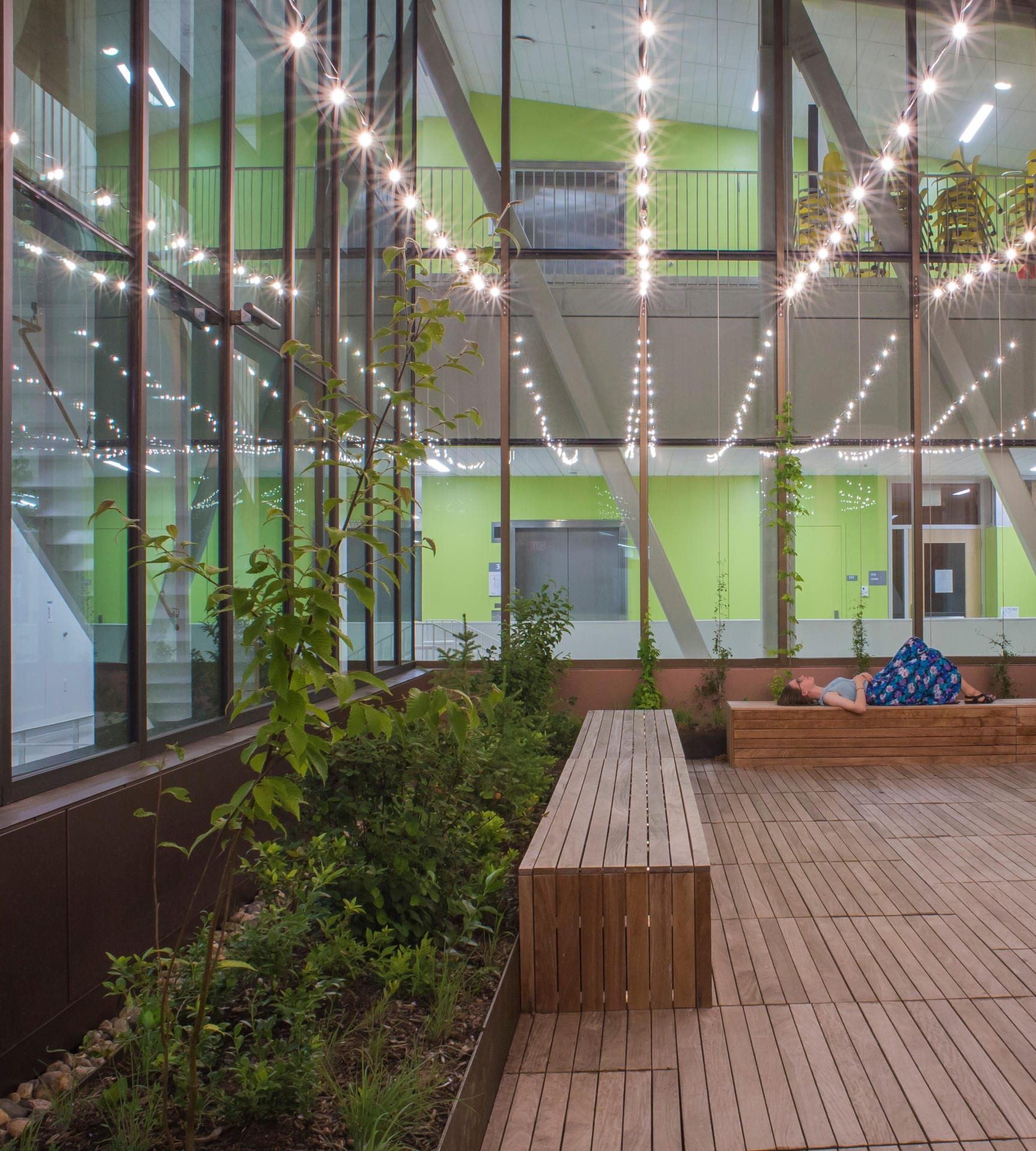 Festive string lights at the rooftop courtyard allow for nighttime use of the courtyard. Photo: Ngoc Doan

Within our office studio, we are probably most invested in the smallest and least visible of all the project’s gardens. On the third floor of the building, above the central interior common space, is a rooftop courtyard, roughly 30 feet by 70 feet. Surrounded by studio space and faculty offices, it was conceived of as the alpine summit garden. Sometime during Construction Documents, the design team was informed that the University had received a grant related to timber construction. In turn, Leers Weinzapfel re-designed much of the building’s structure with engineered wood in lieu of steel. This dramatically changed our original design for the rooftop courtyard which was to be supported by steel trusses with soil depth of two feet throughout. 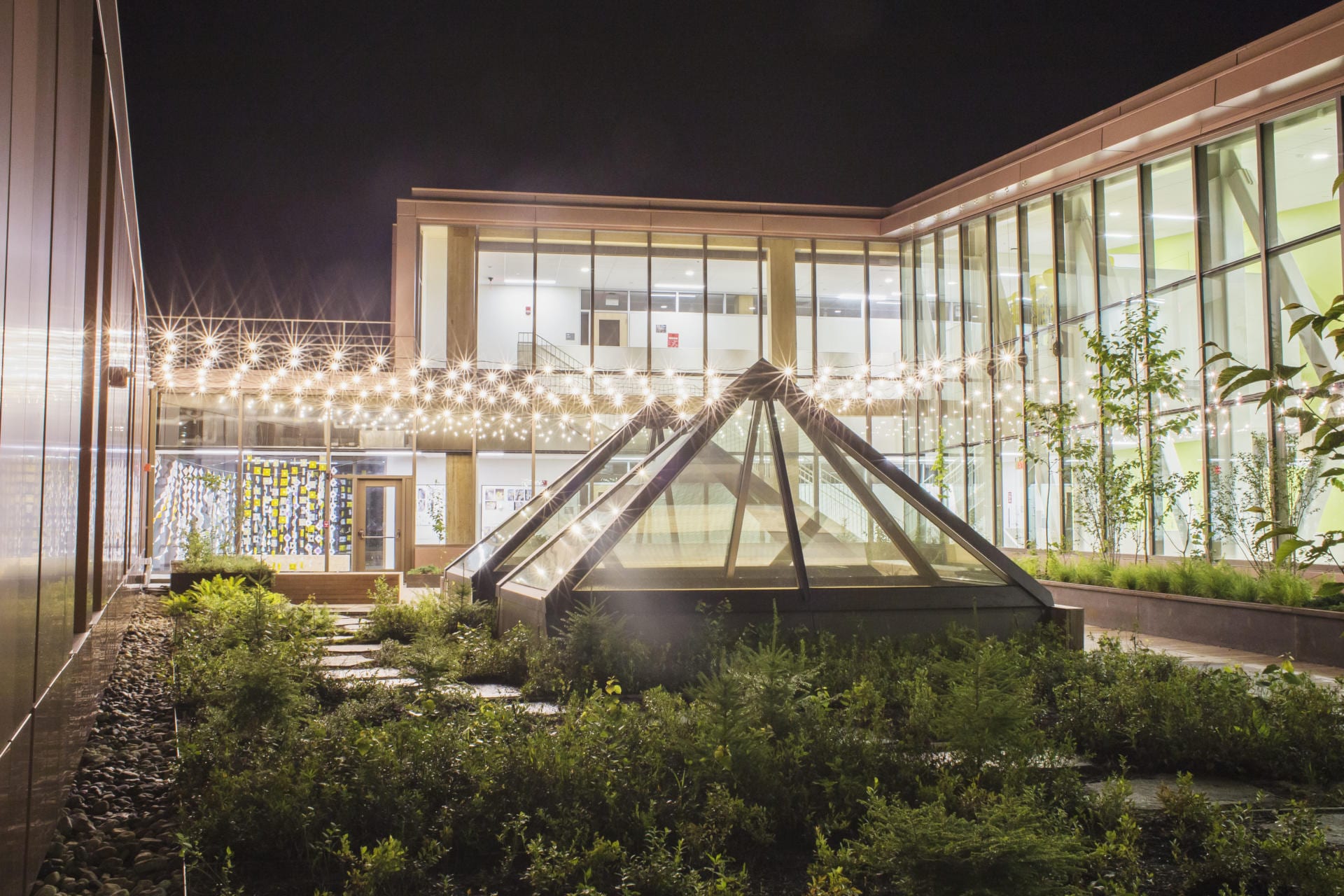 The rooftop garden is used by students and faculty alike for seasonal events, classes, and most importantly, as a flexible garden for social and informal gathering. Photo: Ngoc Doan

As the architects began to design the most innovative wooden truss of their career, we had to figure out how to create an innovative garden on less than six inches of soil. Going back to the concept of a summit landscape, we researched alpine plants and soil depth, did sun and shade studies, and came up with a plant list that relied heavily on collected species, bare root plants, and wild harvested sods. 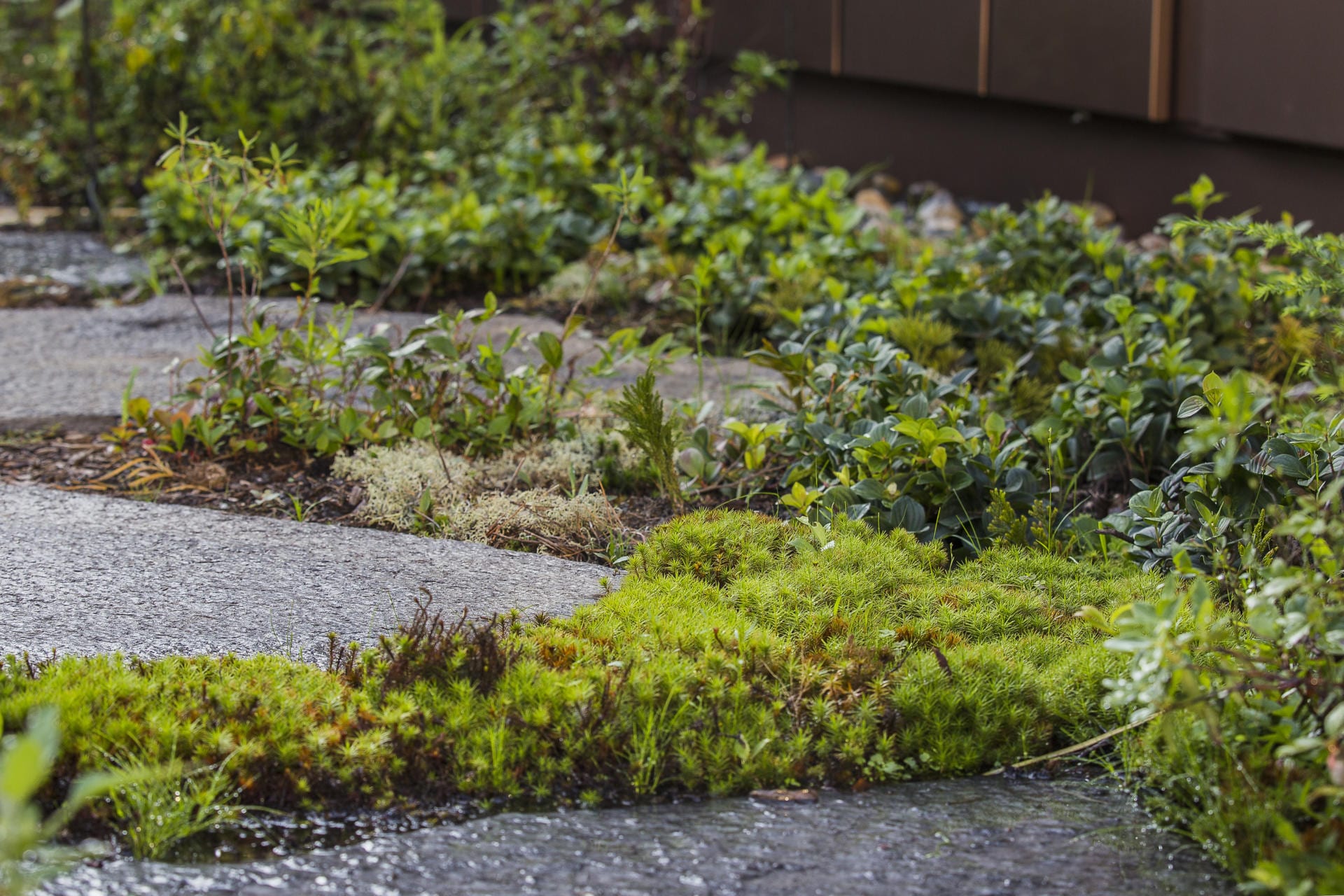 Detail photography of native alpine species thriving in a shady corner of the rooftop garden. Not a single sedum was planted on the rooftop. Photo: Ngoc Doan 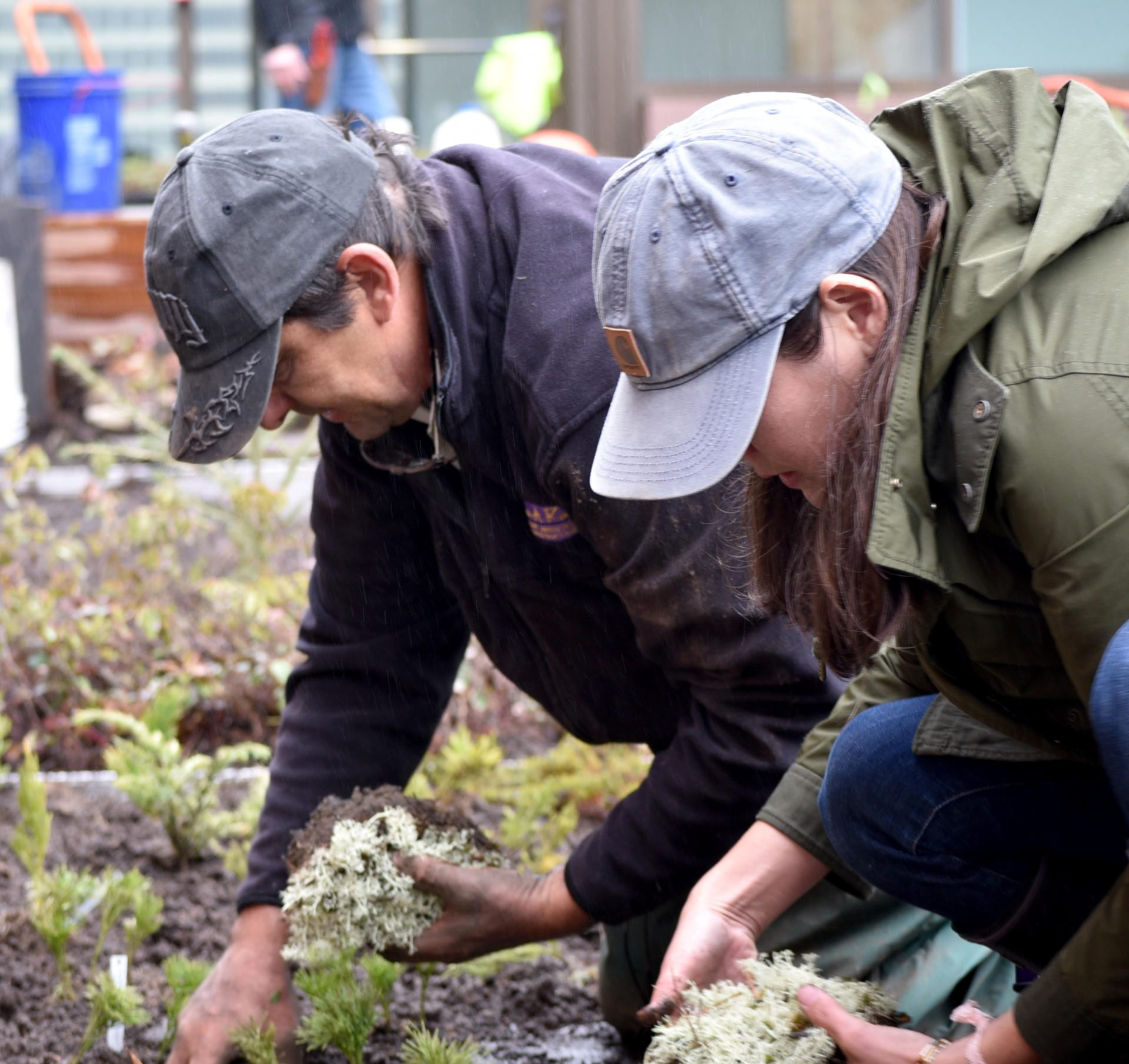 Garrett Stone and Lauren Stimson worked alongside Stephen A. Roberts, the landscape contractor, on the installation of many of the alpine lichen and mosses of the rooftop garden. Photo: Stephen Stimson

The largest truss span below the garden was conversely the thinnest soil profile. This portion of the garden is planted in bands with varying three- to seven-inch depths in response to the wooden truss below. In these areas, we worked alongside the contractor, Stephen A. Roberts (also a LARP alumnus) to carefully plant micro colonies of Cladonia spp., Lycopodium spp., Tortula ruralis, Arctostaphylos uva-ursi, Vaccinium vitis-idea, and Dennstaedtia punctilobula. The wild sods were a diverse collection of species such as Cornus canadensis, Gaultheria procumbens, Mitchella repens, and Vaccinium angustifolium. Young evergreens such as Picea mariana and Abies balsamea were sited in pockets of soil throughout, waiting to become windswept and stunted like their counterparts on the summit of nearby Mt. Holyoke. Two skylights provide light to the common space below, while a wooden deck and boardwalk offer flexible gathering space for events. We managed to integrate narrow planter boxes with a depth of 17 inches at the edges of the courtyard where the support was stronger. 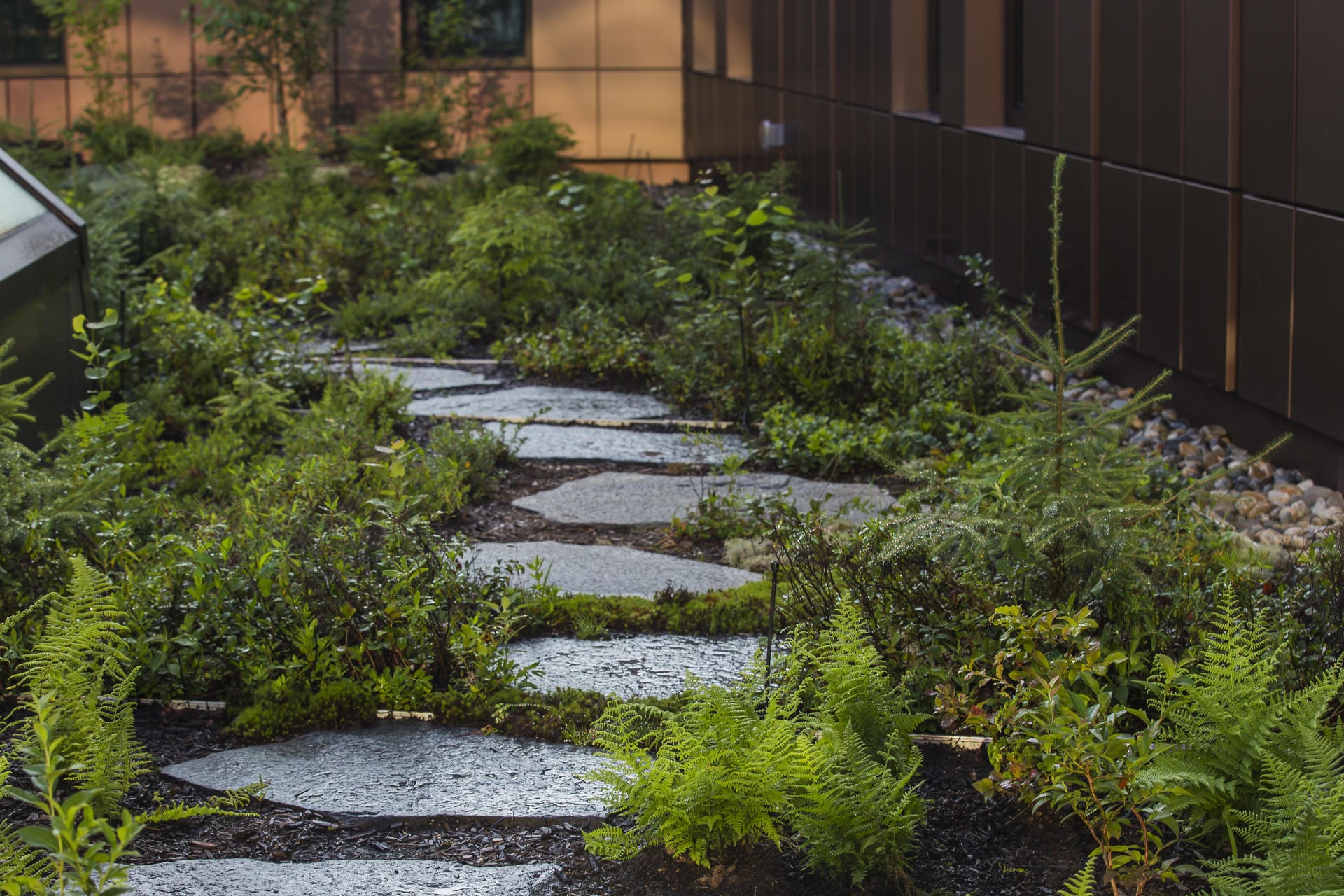 The rooftop courtyard is by far the most experimental roof garden we have ever designed and built. It offers a tangible approach to rooftop planting in our New England climate that strays from the conventional sedum garden and instead is inspired by place-making and the hilltop ecologies of western Massachusetts. As with the other gardens around the Design Building, the summit garden is a place for learning about the plants of the region. More importantly, it is a test plot that will be highly monitored and documented by our studio and the stewards at LARP. 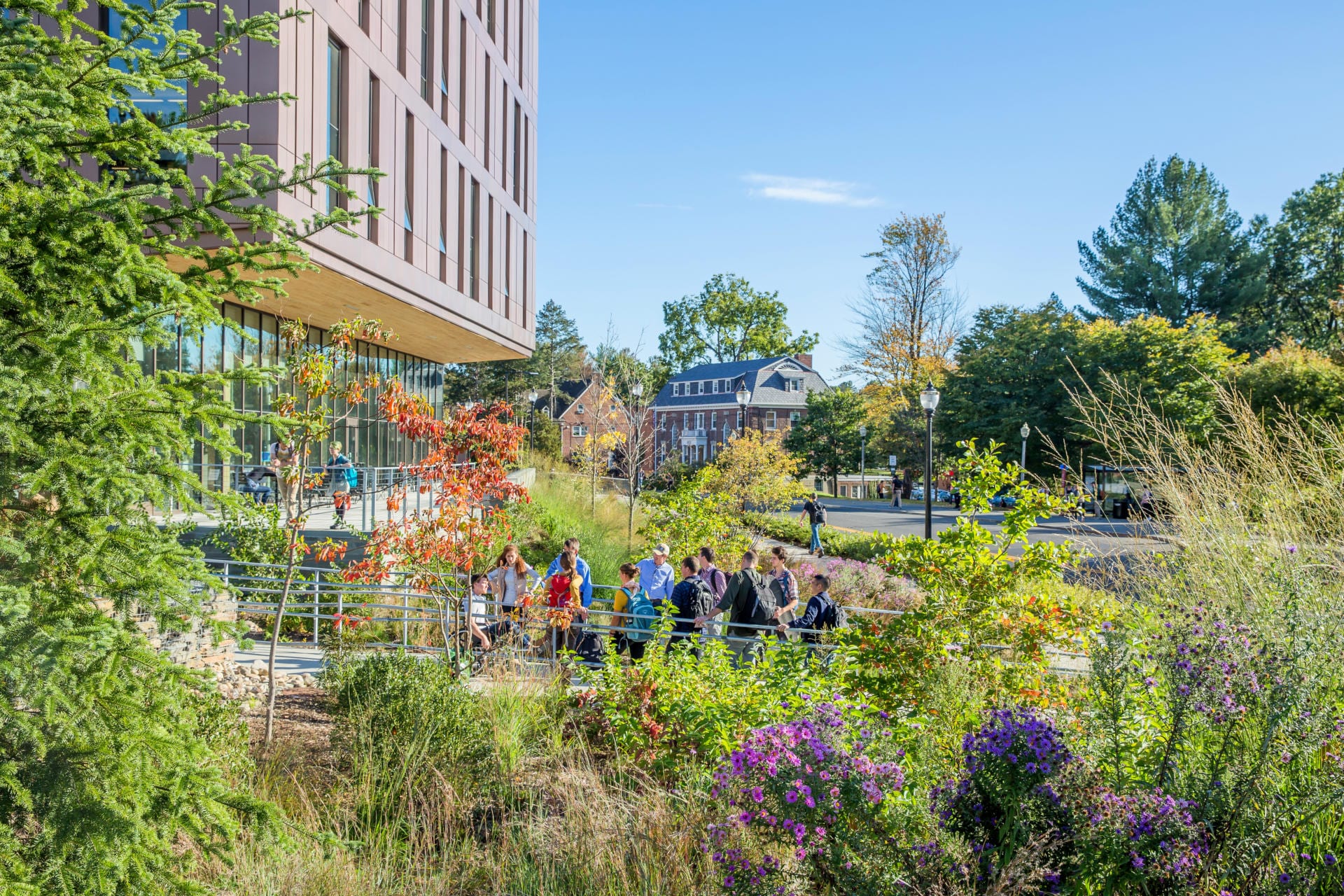 Our hope is that the landscape of the Design Building encourages students to get up from their desks, to get out of the studio, and to learn from the gardens and the larger landscape that surrounds them.

Lauren Stimson holds a Masters in Landscape Architecture and a Masters in Regional Planning from the University of Massachusetts Amherst, and studied theater and geology at Bates College. She is a Principal at Stephen Stimson Associates and a licensed Landscape Architect in the state of Maine. Recently built projects include Pulaski Park in Northampton, MA, The Ledges at Williams College, and the new Design Building at UMass Amherst. She has a deep love for New England where she was raised, and an interest in the overlap between the built environment and the rural landscape, especially as it relates to historic villages and farms. Drawing and painting are a way for her to document the character of ordinary landscapes and cultural patterns. She learns a great deal about plants from her garden and with her husband oversees Charbrook Farm and Nursery, in Princeton, MA at the base of Brown Hill and Mount Wachusett.

Landscaping with a Purpose – What’s Diversity Got To Do with It?
Exploring Rogue Territories