John Engwer had been running his own Wrentham, Massachusetts-based landscaping business for about twenty years when an idea occurred to him while looking through one of the trade magazines. One of those hydraulic mulch-blowing trucks would sure make it easier to service the growing number of client properties that needing mulching; much easier than continuing to spread it all by shovel and wheelbarrow. But, it wouldn’t make economic sense to purchase a $150,000 piece of equipment that would only be used for a couple of months out of the year. 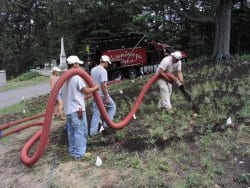 A hydraulic blower truck is used to mulch a new meadow planting.

At the same time, he began learning about the benefits of using compost in the landscape: how it improved soil conditions, helped mitigate disease, provided nutrients, etc. He quickly realized that compost might provide a key to expanding the utility of the blower truck.

This machine would be the ideal tool for applying compost for a variety of uses such as topdressing lawns and amending existing soils. John noted that, “The first yards of material that passed through the truck were compost.” Eventually, the truck was used for mulching as well, but getting involved with compost proved to be a critical step that would help set the future direction of John’s work and of Groundscapes Express.

Within the first year of incorporating compost into his work, John realized that quality compost was difficult or impossible to obtain in the quantities that his growing business needed. “Most of what was available was biosolids, and there were few local sources,” John recalls. The solution: Make his own! John negotiated a joint venture with the state of Massachusetts to site a compost operation and set up a commercial-scale composting operation, and then he accompanied his site manager to a compost training program.

The facility utilizes local food and yard waste, and takes in no biosolids, which can contain contaminants such as heavy metals. The piles are turned regularly and temperatures are carefully monitored to ensure the piles generate enough heat to kill disease pathogens and weed seedsSome benefits of compost use were quickly and dramatically evident. The summer of 1998 in New England was extremely dry and hot. Many towns had outdoor watering bans in place because local reservoirs were so low. Lawns were not getting enough water and many had baked to a crispy brown by August. Although the standard practice was to import and spread loam as a seed base for renovating lawns, John realized that this would be an opportunity to demonstrate the effectiveness of compost. His crews aerated, seeded, and applied compost as a topdressing to a number of lawns, and he even impressed himself with how quickly they recovered. Since then, compost application has been an important part of lawn renovation and maintenance. 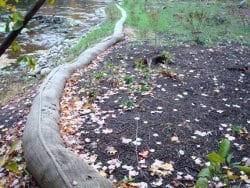 From his previous work in construction and paving, John saw firsthand the problems with soil erosion and the limitations of conventional methods of controlling stormwater and mitigating erosion. There were problems with hay bales and silt fences, and hydroseeding often failed. He became aware of work being done in other parts of the country utilizing compost in stormwater applications, so it was a logical step to begin installing compost/mulch berms and soil blankets on disturbed sites.

Awareness of the benefits of this approach has grown steadily since those early years, but there is still a need to spread the word on how these techniques work and demonstrate their cost effectiveness. “It’s all about education,” John is fond of saying. Groundscapes regularly gives presentations and distributes information to conservation commissioners, municipal officials, project engineers, and others to describe how these methods work and to show examples of successful projects where they have been employed. 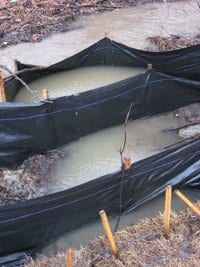 From its early days, Groundscapes has had a relationship with ELA: first as Conference attendee, then Eco-Marketplace exhibitor, and finally Conference sponsor. The networking that ELA facilitates has been invaluable for professional development and finding people to collaborate with. Some of these collaborations have led to work on an installation at Kent Hospital in Rhode Island, erosion control for the Fresh Pond restoration in Cambridge, slope stabilization at Wellesley College, and multiple projects at Mount Auburn Cemetery, among others.

A current emphasis of John’s work is the improvement of project specifications to bring them to the highest practical standards, to encourage the adoption of best management practices, and to prioritize control of invasive plants, an aspect which is given inadequate attention in many projects. Some of these efforts will be discussed at an ELA Roundtable presentation in Wellesley on January 19. We hope you can join us!

Nick Novick operates Small Planet Landscaping which specializes in native plant installations and fruit-tree care, and has worked cooperatively with John Engwer on a number of projects for the past few years. He is also a former board member of ELA and currently represents ELA on the Massachusetts Invasive Plant Advisory Group.