By ecopro on January 15, 2013 in Public Gardens and Parks, Stormwater Management

Two months ago, Hurricane Sandy devastated coastal regions of New York and New Jersey. Much of Brooklyn Bridge Park (BBP) was underwater for four hours. Sandy was the second “100 year storm” in two years, and researchers at MIT say we should now expect such extreme weather events every three to twenty years. In light of our changing climate, robust ecological landscapes must now comprise more than native plants, sustainable construction, and organic management practices. Landscapes should be created with rising waters and extreme weather events in mind, and management practices for storms and floods should be researched, established, tested, and shared.

Below is a case study for horticulturally-focused storm management, using BBP’s experiences and experiments after Hurricane Sandy. The techniques utilized might be helpful in other coastal or storm-prone landscapes. Management strategies and (very) preliminary experiment results are laid out below with the hope that other landscapes might benefit from and join the conversation about how to manage horticultural storm damage in the future. 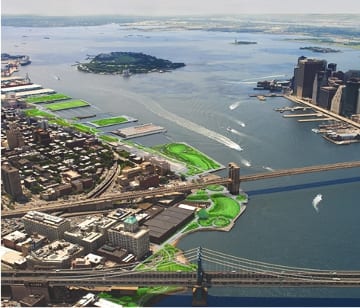 Brooklyn Bridge Park is an 85-acre public park built on reclaimed shipping piers along the East River. The park contains many distinct ecosystems – from meadows to forests to wetlands – and is managed with an emphasis on ecology. While our many piers were hit hard by Sandy, the park weathered the storm relatively unscathed.

Large areas of the piers, uplands, and even surrounding streets of the park were submerged in brackish and salt water for up to four hours during the storm. The park lost electricity that BBP is still working to restore, and two playground surfaces were badly damaged. Three young trees toppled over, and anything that wasn’t secured, from 200-gallon planters to shipping containers, floated incredible distances around the park. However, that was the extent of the damage. While it is too soon to tell if submerged plant material will return with full vigor in the spring, initial surveys indicate minimal plant loss and we are cautiously optimistic. We owe this adaptability to forward-thinking park design and proper management in the days and weeks after the storm. 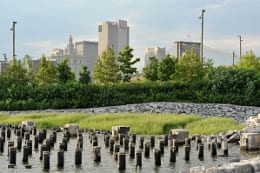 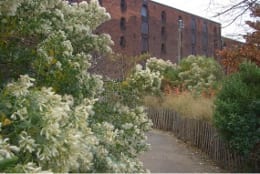 Topographical changes blocked incoming flood waters, soft edge treatments of rip-sap and salt marshes held up against violent water forces, and the park itself soaked up waters that might have damaged the surrounding neighborhoods further. The sandy soil profiles used in the park (between 70-90%) helped the initially salty soils drain quickly. Plants were selected for salt tolerance and placed with rising water levels in mind, using many salt tolerant natives like Pitch Pine, Beach Plumb, and Baccharis in flood zones. 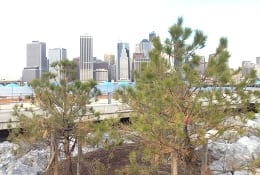 Pitch Pines along the BBP’s stabilized edge, one of several species of salt-tolerant plants in the Park. Photo credit: Rebecca McMackin

It is this kind of design sophistication that can help create the adaptable and climate change-appropriate landscapes of the future. However, proper post-storm landscape management can be just as critical for insuring long term plant survival.

Flushing Out the Salt

Following the storm and after four hours of salt water inundation, our biggest horticultural concern was flushing soils of plant-toxic salts. Remember Carthage? Elevated salt levels can kill plants through reverse osmosis and make soils uninhabitable for plants in the future. There was a concern regarding adding water to potentially drowned plants, but salt was determined to be a more critical factor. 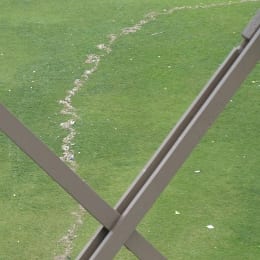 The high water mark on the lawns was clearly visible. Lines were traced with paint to locate salinity treatments. Photo credit: Matthew Wills

Without electricity, the extent of our irrigation system was limited to a single zone at a time. With 100 zones per pier, this was not enough. Water trucks were brought in to spray foliage and flush soils in low-lying lawns and beds. We estimate that soils received two to three inches of water through these means in the week following the storm. While the Nor’easter that swept New York just a week after Sandy was devastating to many neighborhoods, compounding prior damage, it was incredibly beneficial to BBP, which soaked up the additional inch of water happily.

When flushing soils, salt does not simply dissipate; one has to chase the salt down the soil profile. We were aiming for a safe salinity level of <2PPT to a depth of 18 inches, out of the reach of the majority of the plants’ roots. It is estimated that 12 inches of water will reduce salinity by 80%, and while this is by no means always accurate, we used it to set a goal of applying 12 inches of water to the park’s more affected areas. Between irrigation, rainfall, and water trucks, we estimate that the park received about 14 inches of water in the month after the storm.

In addition to water, we received many recommendations regarding soil additives that might help bind or drain salts. It has been my experience that the data on these methods are limited and some are feared potentially harmful to soil food webs, so we divided the park into quadrants to test the efficacy of our various options, as well as potential damage to soil biology. 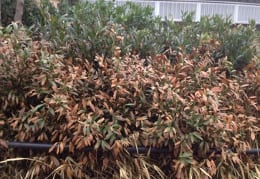 Salt damage to Cherry Laurel above and below the water line. Photo credit: Rebecca McMackin

Humic acids were applied to the park. The acids have been shown to aid plants with nutrient uptake and reduce stress in saline soils, as well as potentially lower soil salinity levels. Originally, lignite-based humic acids were integrated into a compost tea mix and sprayed in with water, and later applied again to all areas as a granular. As this is a proven technique, and carries no potential ecological drawbacks, we applied humic acids to all flooded areas and did not keep a control.

Gymsum (calcium sulfate) has been shown to reduce salinity and increase drainage in sodic and clay soils. While our soils were neither clay nor sodic, we wanted to test the hypothesis that gypsum would reduce salinity in severely compacted areas as well. We manage horticulture at BBP with an emphasis on ecology: a healthy soil food web is the basis for the plant material, habitat, and wildlife. We monitor and cultivate microbial biodiversity. As was expected, inundation in salt water decimated soil ecology directly after the storm (Table 1). While there were undocumented concerns that gypsum might harm the soil food-web, it was decided that elevated salinity was more detrimental and we proceeded with experiments. We took soil samples for food-web analysis before application of gypsum to selected locations. We will sample again next year to determine both short- and long-term effects to soil biology. 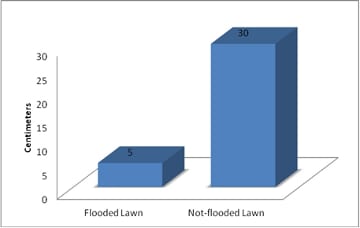 Table 1 – Post-storm arbuscular mycorrhizal content of a turf grass above and below the flood line. Source: Ecolandscaping 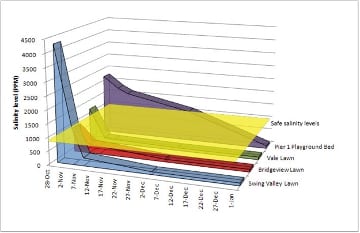 Preliminary results (Table 2) indicate that the majority of our soils drained quickly back to safe salinity levels regardless of treatment. Only the most compacted areas remain potentially problematic. Soil compaction is a major factor in salinity drainage because water has a hard time flowing through compacted soils to flush the salts.

Comparing Results and Planning for 2013

Due to limited data, it is too soon to say how our various amendments affected soil salinity. In the days after Hurricane Sandy, we were focused more on helping the park rather than science. It is our hope that patterns will appear with increased testing in the coming year. I invite anyone in similar situations or with experience in the matter to contact me regarding post-storm landscape management. Through comparing notes and techniques with many coastal landscapes in the region, it is my goal to construct and share best management practices for flooded coastal areas. I would welcome collaboration in this process.

While the true extent of the plant damage from salt water flooding will not be known until well into next season, preliminary tests indicate that trees, shrubs, forbs, and turf sustained only minimal damage. We were lucky that the storm hit after most of the plants had begun going dormant for the winter. With good design, good management, and good luck, we hope that most of the plants at BBP will thrive in the coming year. Visible plant deaths so far have only occurred in recently transplanted trees, ironically Pitch Pines. While we had hoped to take much of the established planting beds off of irrigation this year, we will continue to water for 2013, especially in the case of drought. We will continue monitoring all plants closely and keep track of survivor and vulnerable species for future use.

The evolution of ecological landscapes must take our changing climate into account and seek to create and manage landscapes that perform the ecological processes and services capable of surviving and even mitigating extreme weather events. We have to plan for 100-year storms and expect them every decade. Using the unfortunate event of a super-storm to test remediation strategies for future hurricanes can turn a potentially devastating event into an opportunity for science.

Rebecca McMackin is the Park Horticulturalist for the award-winning Brooklyn Bridge Park, with an eye toward wildlife encouragement and habitat creation. Rebecca is an avid environmental educator and lectures at the Brooklyn Botanic Garden and Stone Barns Center for Food and Agriculture. She holds a MSc in Landscape Design from Columbia University and a MSc in Biology from the University of Victoria.