By ecopro on January 15, 2011 in Native Plants, Wildlife Habitats

There is a special feeling that comes from planting a tree and watching a bird land in it for the first time. Or planting milkweed for monarch butterflies and watching the first monarch fly across the backyard and lay her eggs on it. I felt that small rising of hope and connection in the late spring of 2009. After a long series of difficult events, I ended up on a small island off the coast of Buzzard’s Bay. I was exhausted and depressed but clutching $180 worth of hope in the form of seeds from Monarch Watch, a cooperative network of students, teachers, volunteers, and researchers dedicated to the study of the monarch butterfly, Danaus plexippus. 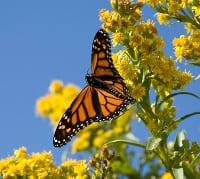 That spring I planted three species of milkweed, in addition to Indian paintbrush, zinnias, Echinacea, joe-pye, goldenrod, and purple horse-mint. The planting area was originally a tangle of multiflora rose, Eurasian blackberry, privet, non-native bittersweet, and honeysuckle. This tangle of non-native, invasive plants choked trees and covered 50 years of dumping by the previous owners. That first dreary, labor-intensive spring I was able to clear enough space and time to plant my monarch way station seeds in the first area cleared of the non-native tangle. The weather that spring was cool and rainy – perfect for growing plants from seed. When several months later the first monarchs flew across the backyard and landed in the milkweed shoots, I felt a surge of joy.

Monarch butterflies have long been revered as transmigrating souls by the Mexican peoples who live in the mountains in Mexico where they overwinter. It is an amazing sight to see the millions of butterflies roosting in fir trees and rising en masse in the warmth of the sunshine. It is a sight I feel very privileged to have witnessed with my husband Bill Chodoff in January of 2006. When he died in November of 2007, the only activity that absorbed some of the grief I felt was planting. Planting for the butterflies that were so important for both of us at the end of his life seemed like a natural next step, and one that fit well with my other obsession – identifying and planting native species appropriate for the south coast of New England.

A Day in the Life

Planting several species of milkweed, the host plant for the monarch caterpillar, has drawn me deeply into the life cycle of the monarch butterfly the past two years. Having a monarch way station in the back garden allowed me to video bits and pieces of the monarch life cycle on a sort of ad hoc basis in 2009 and 2010. 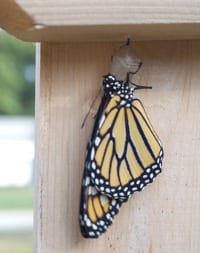 But when I heard an advertisement for “One Day on Earth” a documentary and new media project in which participants would simultaneously film their human experience over a 24-hour period on October 10th, 2010 (10.10.10), I thought that the monarch’s story should be included. October 10 was a sunny bright day and many monarchs stopped by to sample the late blooming zinnias, cosmos, Echinacea, and goldenrods. I compiled a 2-minute film for the video project. Viewing this short film is a great antidote to a gray wintry day in the Northeast.

The good news is that anybody and everybody can participate in this type of habitat restoration. Milkweed grows well in containers as well as by the side of the road or on the edge of your garden. I didn’t know a whole lot about plants and insects when I started four years ago, but I learned pretty quickly once I got going. Also, the protection and restoration of insect habitat may be a tough sell to your neighbor who gardens with a gallon of Roundup, but when others see the steady stream of brightly colored butterflies show up they may become more interested despite themselves.

My husband and I used to joke a lot about not postponing joy. We used the phrase to wryly remind ourselves that some of our most 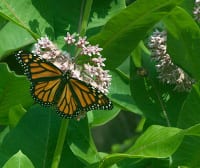 joyful decisions (like the giant puppy) involved a lot of physical work that we didn’t always anticipate. Removing invasive plants and planting native species does involve hard work, especially at the beginning, but knowing that you are supporting wildlife by planting for the very center of the food web makes it a life affirming and joyful exercise. After the first few years the work eases up, and there may be nothing easier to take care of than a perennial native plant garden. So – don’t postpone joy – plant a monarch way station!

Louise Barteau (Chodoff) is an artist and educator who became interested in native plants when creating GROVE, a public art project. She began making paper from invasive plants in 2008 and will be demonstrating her papermaking activities at the ELA Conference & Eco-Marketplace on March 3. More information about GROVE may be found at www.treemaker9.com.

For a full discussion of the life cycle and migration of the monarch, as well as to purchase seeds to promote the growth of host and nectar plants in monarch waystations, go to monarchwatch.com.

Another great interactive website if you are interested in the migration process is Journey North at www.learner.org/jnorth which becomes Journey South in the fall.