By Maureen Sundberg on January 14, 2015 in Native Plants

As the climate warms up, we are faced with some daunting facts. Our frost free season is getting longer. Our winters are warmer, at least sporadically. Violent weather events are becoming more frequent. Summers are getting wetter, but strange weather patterns are bringing prolonged dry spells. 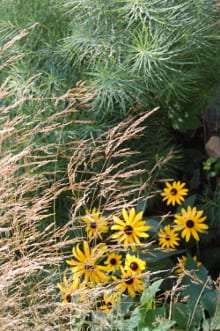 With more severe weather and a warmer climate, will plants such as Rudbeckia Goldsturm and Amsonia hubrectii continue to perform well in New England?

The USDA hardiness map has been adjusted as the climate changes. In our part of New Hampshire, over the last 20 years, we have gone from hardiness zone 4 to zone 5. In the most recent update of the map, they added two new hardiness zones in the south. Things are warming up.

Weather extremes and changing zones ultimately influence our plant selections. There are radical implications in the grain belt of the US, the Midwest regions where so much of our grain is grown. Some predictions indicate that the dry desert areas will move north into our prime growing areas. And that the prime grain growing conditions will move up into Canada. Where does this leave us??

Luckily, with ornamentals, the consequences aren’t so grave. We have a huge palette of plants to choose from. And as the climate warms up, we can experiment with plants from further south. This has been a trend already. We, as perennial growers in what used to be a cold zone 5, now get asked for zone 6 plants all the time. And we are never confident that they will do well. At least for now, as the climate remains volatile, we can always get a cold winter like we had in 2013-14. Some plants that we never used to grow but are becoming more common in our region are Lavender, Ceratostigma, Caryopteris, and Hakonechloa. Folks are even having success with Acanthus spinosus; this would have been impossible 20 years ago. 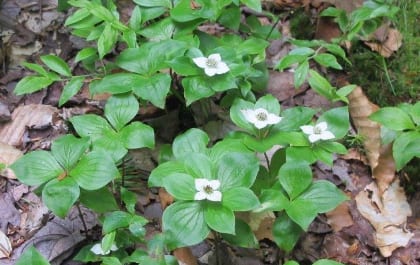 Plants such Cornus Canadensis (White Mountain shown here) have commonly grown throughout New England, but may become less common given a warmer climate.

The other thing to think about is plants that will no longer do well in the Northeast. The southern range of certain plants is in New England since they can’t take hot summers. As it warms up, these plants will no longer tolerate our summers, and they will migrate further north. Let’s take Cornus Canadensis for example. In the past, it grew throughout New Hampshire. And it grows fairly commonly in Massachusetts, mostly in the west where the climate is cooler. As the summers get warmer, will it continue to be a viable option for New England? Or will it retreat up into Maine and eventually only remain in high altitudes. There are a number of other plants that fall into this category. It will be important to identify them and think carefully about whether we keep using them and how we site them.

For years we have been working on a list of good tough plants that work in New England landscapes. Plants that are adaptable to different situations and that don’t need a lot of finicky care, plants that will be around for years. We named this group our Wicked Ruggeds and this list is a good place to start looking. These plants are tough, and if sited well will take just about anything that climate change will throw at them.

I mention siting, and this is of key importance. Once you have a plant in its correct zone, drainage is the next key factor. If a plant has the right soil drainage, it will survive extra wet summers (and winters), and will have enough water to survive drought. Siting will become more of a challenge in the future.

How will we change our plant list going into the future? We like to talk to a lot of landscapers and gardeners to find out what they are having success with. We try plants in our gardens, and we visit other gardens. As we hear about more successes, we will start growing new plants. And I would bet that more plants from the south will be in our selection in the coming years.

Peter van Berkum, along with his wife Leslie, started Van Berkum Nursery (VBN) in 1986. VBN is a wholesale perennial nursery specializing in natives, shade perennials, and Wicked Ruggeds – plants that perform well and last a long time in New England landscapes. Peter has a degree in Plant Science from the University of New Hampshire, spent a year studying horticulture in the Netherlands, and worked at several nurseries before starting VBN. He is a past president of the New Hampshire Plant Growers Association, as well as a founding member of the New Hampshire Horticulture Endowment. He and his wife were recipients of the Massachusetts Horticulture Societies Silver Medal, and Peter was the Perennial Plant Association’s Grower of the Year in 2013.

The Structure of Green Infrastructure
Preserving Trees Through Collaboration