By Maureen Sundberg on January 18, 2016 in Landscape Design

As a trained Landscape Architect, I decided to change my career 15 years ago, not because I found the profession unfulfilling, but because I wanted to enhance my involvement in the profession. I discovered a field that would allow me to contribute to Landscape Architecture in a manner that would enhance the work we all do: landscape lighting design. Focusing on lighting design has brought me great professional fulfillment by integrating my two design passions. For the last 15 years, I have been a practicing Lighting Designer in the Boston area and have had the opportunity to work with some of the most talented designers, helping them integrate lighting into their landscape designs.

As a Landscape Architect, I became disappointed with how I often saw lighting being used in landscape design. It was often relegated to strictly dealing with issues like safety or security and more often than not left until the last minute to be added to a design. The absence of basic lighting knowledge permeates the Landscape Architecture profession: lighting is often an afterthought in the design process, it is rarely used to further the design concept, and the design of it was often handed over to lighting sales representatives to implement, ensuring no continuity between landscape design and lighting design. This approach rarely results in the lighting design enhancing or contributing to the overall project. To relegate a medium that can have such a transformative effect and that can extend the use of the spaces is a lost opportunity.

Though the intricacies of lighting design can be complex, the overall concept is relatively straight forward. Setting aside the complexities for the moment, the fundamental premise to Lighting Design is “Light the things you want to see.” By lighting the objects in the landscape that we want to see, we start to create hierarchies, and in most cases, the rest of the design takes care of itself. If the hierarchy of the lighting design starts to match the hierarchy of the landscape design, and if the lighting is carefully integrated with the landscape, we start to create spaces that can be enjoyed by people during all times of the day. More often than not, when lighting is introduced strictly in the name of “safety and security,” we end up with over-lit, unsafe, and uninspired spaces, at night. 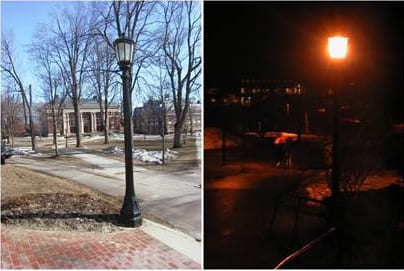 Even though photometrically the paths shown in daylight at left are lit to what would be considered “safe levels” at night, the image illustrates that other considerations need to be taken into account. The entry to the building in the background is no longer prominent, and the visibility of the light source in the post top makes the surrounding area feel darker then it truly is.

A recent example of this occurred for me on a tour of a rural private boarding school that had asked me to come in to discuss upgrades to their site lighting. We walked around the softly-lit campus one evening with no issues, until we came upon an area that was, in my opinion, over-lit, and felt very out of character for the school. As we passed through the area, my tour guide commented that he liked the level of lighting, as it instinctively felt safe to him. When I didn’t respond, he turned around and noticed I had “disappeared.”  I had actually only taken a few steps back, but because of the contrasting levels of light that we were standing in, my guide could no longer see me. I essentially “disappeared” in the landscape.

After a few seconds, I walked back into the over-lit space and asked if it still felt safe to him, to which he agreed it didn’t. We then explored the idea of increasing the lighting levels across the whole campus to match those of the area we were standing in, but noted that higher light levels would change the rural character of not just the school, but also the surrounding area. Higher light levels would also increase the budget and draw attention to everything, rather than promote hierarchy on the campus. Ultimately, we agreed the issue the school had was not necessarily having light levels that were too low, but having extreme contrast ratios: areas of the campus that were over-lit, while areas of importance, like building entries, were under-lit. 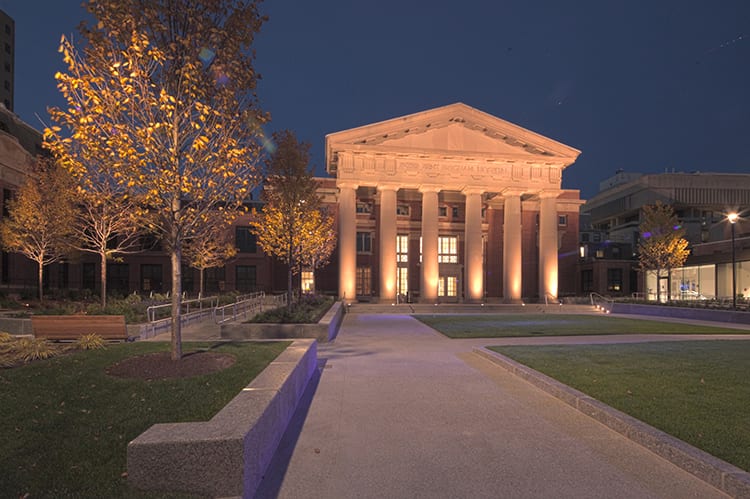 Recently, the field of Landscape Architecture has started to recognize the impact and transformative quality that good lighting can have on a design.  It’s been an exciting time to be in the field, not just because of this recognition, but also because lighting is undergoing a transformation of its own.  Advances in solar technology and the continual miniaturization of light sources has allowed for more opportunities to integrating lighting with the landscape. 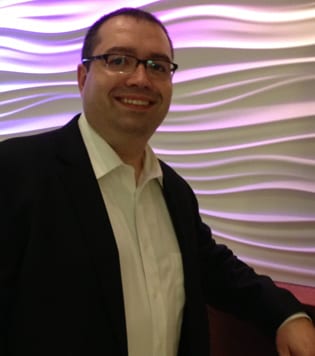 Lukas Sturm has over 15 years of experience as an architectural lighting designer and co-founded Lumen Studio, Inc. in 2012. He is the primary technical principal at Lumen and is responsible for the firm’s IT system. Mr. Sturm is a trained Landscape Architect, but has found lighting to be a means of contributing to people’s sense of well-being by transforming their understanding of architectural spaces through the use of light. His portfolio includes transportation centers, academic buildings, historical restoration, landscapes, and daylighting-intensive projects. He also has a light art installation at the Museum of Russian Icons in Clinton, MA, and his work has been recognized at the regional and international levels.

Get the Dirt! Grow Food and Soil with a Food Forest
The Role of Native Cultivars in the Ecological Landscape: Evaluating Insect Preferences and Nectar Quality in Phlox and Its Cultivars